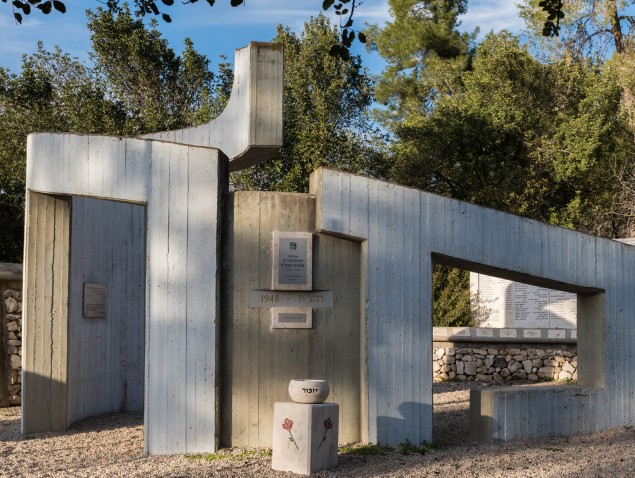 The Machal Memorial at Sha’ar HaGai, dedicated in 1993, was created to honor Machalniks, those who came from outside of Israel to voluntarily fight on behalf of Israel and the Jewish people. The memorial is made up of the letters Mem, Chet and Lamed, forming the word Machal. Photo: Yehoshua Halevi

“Shall your brethren go to war, while you settle here?” (Numbers 32:6)

When the Biblical Tribes of Reuven and Gad wanted to settle on the eastern bank of the Jordan River, Moshe rebuked them, insisting that they join the other tribes in battle. Only once the entire land was conquered were they allowed to “return [to the East Bank], so that [they would] come out pure in the eyes of God and of Israel” (Numbers 32:22). The Biblical precedent of Jews living outside of the land fighting for Eretz Yisrael occurred again in 1947 and is a recurring phenomenon in Israel today.

In 1947-8, some 3,500 Machal members from thirty-seven countries rallied to Israel’s defense (Machal is the Hebrew acronym for overseas volunteers [Mitnadvei Chutz La’Aretz]). These men and women, Jews as well as non-Jews, came to help the fledgling Jewish State battle for its existence. David Ben-Gurion, the first prime minister of Israel, said of these courageous volunteers, “The Machal forces were the Diaspora’s most important contribution to the survival of the State of Israel.”

Many of the Machal volunteers were veterans of World War II, and as such, brought much-needed military skills and expertise to the newly formed IDF. They served with distinction in every branch of the IDF—air force, infantry, medical corps, et cetera. Tragically, one hundred and twenty-three Machalniks were killed in action during Israel’s War of Independence.

The Machal Memorial at Sha’ar HaGai, dedicated in 1993, was created to honor these Machalniks, men and women from the Diaspora who gave their lives for the State of Israel. A memorial service to the Machal soldiers who fell defending Israel is held every Yom HaZikaron at the Memorial.

The Machal Memorial is very accessible; it is a true shame to miss it. Heading towards Jerusalem or Tel Aviv on the Beit Shemesh Road (Route 38), the Memorial is on the right-hand side (east of the road), just before the turnoff towards Jerusalem. Please take a moment to stop and pay honor to these volunteers from the Diaspora and the thousands of others over the years, without whom there might not be an Israel today.

Recently, I attended a wedding in the United States and found myself seated next to Paul Kaminetzky, a 1948 Machalnik, and his wife, Susan. Paul shared his story with me, which I found so inspiring, I decided to devote this column to Machalniks of the past and the present.

Paul’s story of self-sacrifice is typical of a Machalnik. A native New Yorker who served in the US Navy during World War II, Paul joined the effort to bring Holocaust survivors to Palestine on “illegal” boats like the Exodus. Paul was serving as an officer on a boat known as the HaTikvah when the British intercepted it. All of the “illegals,” including Paul, were interned in Cyprus. He was then taken to the Atlit detention camp in Palestine, located just south of Haifa. Paul managed to escape and return to America, but subsequently returned to Palestine to assist yet another clandestine operation—a ship carrying 1,500 Holocaust survivors. During Israel’s War of Independence, Paul served in the nascent Israeli Navy.

In the course of researching this article, I also learned about the well-known Machalnik, Zipporah Porath. Zipporah grew up in Manhattan, and in 1947, went to study at Jerusalem’s Hebrew University on a one-year program. Caught up in Israel’s War of Independence, she joined the Haganah and served as a medic during the siege of Jerusalem. Zipporah ended up remaining in Israel after the war (she currently lives in Tel Aviv). A popular lecturer, she is the author of Letters from Jerusalem, 1947-1948, a compilation of the letters she wrote to her family back in New York during Israel’s War of Independence. The letters, full of her thoughts and feelings during those harrowing days, capture the historic events in a unique way. The volume has gone through five editions in English and one in Hebrew.

These are but two stories among the hundreds of remarkable accounts of bravery and dedication to the Jewish people that took place in 1947-8, many of which can be found on the Machal web site.

After the war, most Machalniks returned to their home countries, though about 500 settled in Israel and raised families. But the story of Machal and its contribution to the State of Israel continues. Volunteers from all over the world—lone soldiers—continue to serve in the IDF. They come from a diverse array of countries and cultures, but they are all singularly committed to joining their brethren in Israel to defend the right of the Jewish people to be a free people in their own homeland.

For those interested in exploring the topic of lone soldiers further, check out the American Veterans of Israel Legacy Corp at israelvets.com. The site contains an online virtual museum that conveys the history of lone soldiers in the IDF, as well as detailed lists of the names of the approximately 1,500 North American men and women, including Jews and Christians, who risked their lives in service of the Jewish people from 1946 to 1949.

“In my wildest reveries,” states Zipporah in her book, “as I was growing up in New York, I never imagined that I would see the Zionist dream of a Jewish state materialize in my own lifetime or that I would personally take part in making it come true.” Several generations later, many of us cannot even envision a world without a State of Israel.

The Biblical story of Reuven and Gad and the shining example of Machal volunteers remind us that every Jew should feel the commitment and obligation to defend the Jewish people and the Land of Israel, whether or not one lives there.

As I began to dig into the story of Israel’s War of Independence, I discovered some fascinating facts about Machalniks:

1. The first pilot to shoot down an enemy plane in Israel’s War of Independence was Gideon Lichtman from Newark, New Jersey.

2. The first commander of the Israeli Navy was Paul Shulman of New York City, an Annapolis graduate.

3. Ben Dunkelman of Toronto, Canada, was a military advisor to the Harel Brigade and a member of the team that discovered the goat path that became the Burma Road, which saved Jerusalem.

4. The 72nd Battalion included the non-Jewish company commander Tom Derek Bowden, a.k.a. Captain Appel. A British paratroop officer in World War II, he was taken prisoner because of letters found in his pockets from Palestinian Jewish friends, and was sent to Bergen-Belsen concentration camp.

5. Jack Freedman of Great Britain covertly gave assistance to the Sherut Avir [Air Force] while still a member of the Royal Air Force. When he joined the Sherut Avir in February of 1948, he oversaw the restoration of twenty former RAF planes, as well as the construction of a Spitfire plane, all from scrap. Freedman also trained many of the young aircraft mechanics who later assumed important positions.

6. Most of the crew of the Exodus, the famous clandestine aliyah boat, were Americans. 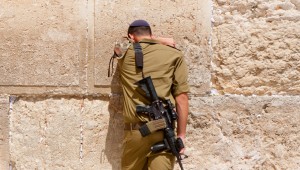 Resources: The Lone Soldier Center
Today, Machal volunteers can find support from a special organization known as the Lone Soldier Center (lonesoldiercenter.com), established in memory of Michael Levin, z”l, in 2009. Michael was a lone soldier who was killed in action during the Second Lebanon War in 2006. He was twenty-two years old.

The Lone Soldier Center provides services to young men and women in the IDF who are in Israel without families, either as new olim or Machal volunteers. The Lone Soldier Tel Aviv office recently dedicated the Stanley Medicks Machal Room, which has an exhibit of wall panels highlighting the heroic and inspiring history of Machal volunteers over the years. The center is located at Ben Yehuda 23 (the corner of Shalom Alechem 5) in Tel Aviv. To visit, call 03.560.1931

OU Reaches Out to Lone Soldiers
NCSY Alumni, in coordination with the Seymour J. Abrams Jerusalem World Center (the OU Israel Center), launched a new initiative to support NCSY alumni who are lone soldiers in the IDF. Through varied programs, such as “Latte and Learning” and Shabbatonim, this initiative will help lone soldiers adjust to army life while they are far from home and, at the same time, strengthen their connection to Yahadut and the NCSY alumni community. The project was kicked off at a January event held at a Yerushalayim restaurant and attended by nearly 100 current and former IDF and Sherut Leumi members.