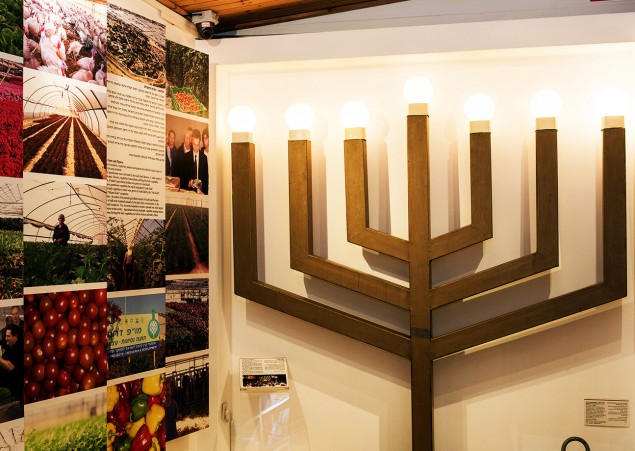 The menorah that once graced the synagogue of Netzarim, a town in Gush Katif that was destroyed in 2005.
Photos: Yehoshua Halevi

The Gush Katif Museum in Jerusalem is relatively small—just five rooms—but it tells a huge story. The events depicted in its exhibits take one back ten years to the trauma of the summer of 2005, when 10,000 Jews were expelled from their homes and their communities. Yet, despite the political overtones and ramifications of the eradication of Jewish communities in Gush Katif and the Shomron, I was amazed at how the museum, which is privately owned and run, manages to portray the story in a touching, personal and nonpoliticized way.

The museum is as informative as it is moving. I was fortunate to be guided by a young woman named Reut, who has worked at the Gush Katif Museum for the past five years. Despite the fact that she and her family were evicted from Neve Dekalim, she escorts visitors around the museum with warmth, offering her reflections on the events of 2005 without a trace of the bitterness that one might expect.

The museum tells a very human story. Passing from room to room, visitors are brought into the lives and frustrations, and the hopes and dreams, of individuals who were asked to pay a heavy price for the strategic policy of Israel in 2005.

Upon entering the museum, one sees a large panel illustrating the 4,000-year history of Jews in the area that we know today as Gush Katif. The panel, which spans the long wall of the entrance gallery from end to end, depicts our Biblical connection to Gaza as well as the modern bond we have with the region.

As has happened so frequently in the Land of Israel, Arab culture has preserved ancient names. Reut informed me that the Arab village of Je’rara (Gerar) is near where the Gush Katif town of Netzer Hazani stood. Gerar is Gush Katif!

Drawing from Parashat Toldot, when Yitzchak travels to Abimelech, King of Philistines in Gerar, due to a famine, the panel clearly shows our Biblical link to the Gaza area. “And Hashem appeared to him [Yitzchak] and said, ‘Do not descend to Egypt; dwell in the land that I will indicate to you [Gaza]. Sojourn in this land and I will be with you and will bless you; for unto you and unto thy seed will I give all these lands’ (26: 2-3) . . . . So Yitzchak settled in Gerar . . . and he sowed in that land, and found in the same year a hundred-fold; and Hashem blessed him. And the man waxed great, and grew more and more until he became very great” (12-13).

A large panel artistically depicts the 4,000-year history of Jews in Gush Katif.

To me, the two last verses represent a clear vision of the future; a prediction of the material success that Yitzchak’s descendants would experience in Gush Katif over three-and-a-half millennia later.

The panel also includes a reproduction of a portion of a mosaic floor in the Gaza area from a fourth- or fifth-century synagogue depicting King David playing his harp. To many, this is evidence of extensive Jewish life in the region during the Byzantine (Mishnaic/Talmudic) period. Much of the panel depicts images of more recent Jewish history in Gush Katif, with photographs of the flourishing towns and thriving industries that characterized Gush Katif from the 1970s until the summer of 2005.

A reproduction of a portion of a mosaic floor in the Gaza area from a fourth- or fifth-century synagogue depicting King David playing his harp.

Moving to the next room, one cannot help but be struck by a large and impressive menorah that once graced the synagogue of Netzarim. The next set of exhibits depict the tragedy of the destruction of beautiful synagogues, schools and batei midrash that once reverberated with the sounds of prayer and Torah study, all of which were turned over to the Arabs whole and intact, only to be recklessly demolished.

Passing from room to room, visitors are brought into the lives and frustrations, and the hopes and dreams, of individuals who were asked to pay a heavy price for the strategic policy of Israel in 2005.

But the loss was not only spiritual. One exhibit tells the story of the extraordinary agricultural infrastructure that once was responsible for exports totalling $2 million annually as well as the formidable obstacles and challenges confronted by the expellees to recreate their businesses in other locations. The display reminds us that there were 3,500 dunams (865 acres) of greenhouses that were abandoned and eventually destroyed by the Arabs. Fifteen percent of Israel’s agricultural produce was grown in Gush Katif. What is most amazing is that this entire agricultural enterprise had been created in Gush Katif on what only thirty years earlier had been sand dunes. Unfortunately, since 2005, only a small portion of the destroyed agricultural businesses has been reestablished in other parts of the country.

In the “orange room”—orange was the color of the struggle against the expulsion—orange-colored bumper stickers, posters, flyers and photos are on display, a testament to the intense struggle that surrounded the expulsion and characterized the summer of 2005. The “black room,” a room painted entirely in black, focuses on the “gerush,” the expulsion, telling the story through maps, photos and videos. Some of the videos include dramatic and heartbreaking scenes of the forced evacuation, including struggles between yeshivah students and soldiers. There are plenty of scenes of weeping evacuees and even of weeping soldiers. And yet, there is a message of hope along with the sense of despair. The designers of the museum wanted visitors to feel what it is like to be expelled from one’s home, to experience the ruptures in Israeli society that the events of that summer created. But they also wanted visitors to leave with a sense of a people struggling together to repair the breaks as an “am echad,” a people united in hope for the future. I asked Reut what she thought is the overriding message of the museum. She said, “We must strive to repair that which has been torn apart in our society, and find a way for our people to remain a strong people, able to cope with failures of the past as we face the challenges that still lie ahead.”

The museum, located at Rechov Shevet Zedek, no. 5, is a short walk from both the Tachana Merkazit (Jerusalem’s Central Bus Station) and the Machane Yehuda Shuk. There is a large municipal parking lot on Agrippas Street, only a few yards from the entrance to the museum. There are plans in the works to expand the museum.

The story of Gush Katif is one that must be remembered as we face the challenges of 2015. The museum effectively jars our memory as it touches our core as Jews.