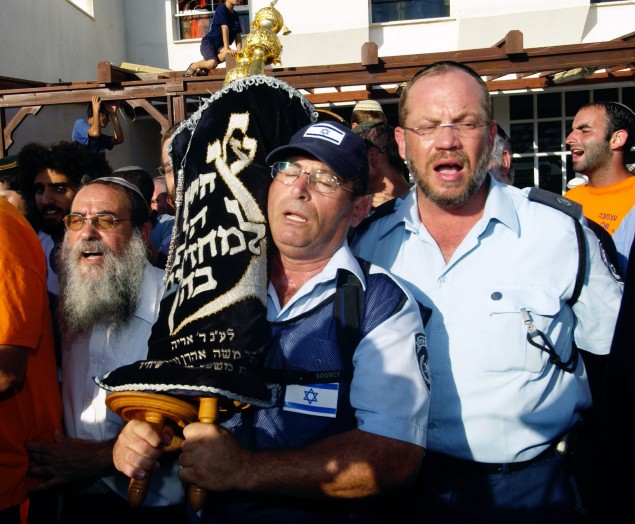 Policemen removing Torah scrolls from the synagogue in Atzmona shortly before the evacuation. Courtesy of the Israel Government Press Office/Mark Neyman

At the edge of the Mediterranean Sea, the nearly 10,000 residents of Gush Katif had succeeded in building a paradise on Earth.1 The farmers of the Gush—responsible for 15 percent of Israel’s agricultural exports—literally made the sand dunes bloom. Most of the residents of the twenty-one communities in Gush Katif and the northern Gaza Strip (several more were waiting to receive official recognition) were farmers, some of whom did innovative work growing bug-free vegetables and organic vegetables and strawberries. Glorious flowers and spices from the greenhouses of Gush Katif filled markets and shops in Israel and abroad. One of the largest geranium exporters in Israel lived in Gush Katif. Other residents of the area worked in Jewish and general education, security, social work, ecology, academia, tourism and the arts, among other professions.

For decades, Jewish residents of the Gush had excellent relations with the local Arabs; many Arabs worked in Gush Katif and Jewish residents went shopping in Gaza. In 1987 the first intifada broke out and brought an end to work on Jewish farms.

In 2000, acts of terror that had started in the nineties escalated, and the Jewish residents suffered immeasurably from bombings of school buses, rockets, mortars and terrorist shootings. Despite the incessant terror, the communities of Gush Katif stayed strong, reassured by the knowledge that they were a strategic necessity, helping to keep Eretz Yisrael safe and secure.

In December 2003, Prime Minister Ariel Sharon, who had been voted into office on a platform that maintained that “the status of Netzarim is like the status of Tel Aviv,” declared there would be a “disengagement.” In August 2005, more than 1,800 families were forcibly removed from their homes and the IDF razed and bulldozed the Jewish communities of Gush Katif. Before the expulsion, the IDF Rabbinate uprooted forty-eight graves from the cemetery in Gush Katif. Among the buried were victims of terror and soldiers who fell in the line of duty. The bodies were reinterred in cemeteries throughout Israel.

Post-disengagement, the Gazan Arabs looted and burned anything left behind. Synagogues were destroyed or turned into training grounds for terrorists.2 Agricultural facilities, which had been left to the Arabs for development (through a deal made with some foreign partners), were reduced to rubble by the hoards of looters who plundered the spoils.

Protests, Shadows and Questions
Prior to the disengagement, hundreds of thousands participated in nonviolent demonstrations. Katifers wore t-shirts that proclaimed “love will be victorious,” and they believed it. At one point, they created a human chain to demonstrate that Am Yisrael is standing with them; the human chain of close to 200,000 people stretched fifty-six miles from Gaza to the Kotel. The media, however, rallied behind Sharon. One left-wing journalist famously said that Sharon had to be protected “like an etrog.”

Distressingly, the disengagement that caused upheaval for so many was all for naught. In 2006, Hamas was voted into power in the Gaza Strip, and tens of thousands of mortars and rockets, more than ever before, have since been shot into Israel at civilian targets. At the time of the disengagement, Sharon insisted that Israel’s withdrawal from Gaza would “reduce terror and give Israeli citizens the maximum level of security.” Katif communities are now used as bases for Arab terror groups and as training grounds for the Hamas army. Only with the help of God have there not been more casualties. Israel had to go to war in Gaza twice since the disengagement, in 2008 and in 2014.

Going Forward
This is not a Pollyanna story with happy endings for all. What followed after the disengagement was bitter disillusionment with Israel’s government, financial hardship and in some cases, financial ruin. The government, contrary to its slick campaigns, did not have “a solution for every [Katif] resident” and placed onerous bureaucracy in their paths. (Some people were asked for decades’-old phone bills—at a time when they didn’t even have phones—to prove they had lived in Gush Katif.) Families were torn apart between those who thought it wise to cooperate with the government and those who refused to pack up their belongings. (In most cases, those who cooperated fared no better.) Not surprisingly, cases of untimely deaths, divorce, poverty, post-traumatic stress disorder and depression rose among former Gush Katif residents.

Yet, against all odds, many of the pioneers of Gush Katif, with remarkable courage and resilience, went forward with their lives. They rebuilt greenhouses, started new businesses, created Torah-learning communities, trained in new professions and shifted their hopes and dreams from the shores of the Mediterranean to the mountains of the Golan Heights and the Galil, to the rolling hills of Judea and Samaria, to the Tuscany-like middle lands of the Lachish area and to the sand dunes of the Negev. Many of their children joined the most elite units in the IDF.

Today, there are approximately twenty-three transplanted Gush Katif/Gazan communities (depending on whether one includes new neighborhoods within towns and cities). Some communities integrated into cities such as Ariel and Ashkelon. Some communities have changed their names (Kfar Darom became “Shavei Darom,” “Those who returned to Darom”); others have retained their original names (like Ganei Tal and Netzer Hazani).

The expulsion from Gush Katif echoes the fall of Gush Etzion in 1948, when the communities of Masu’ot Yitzhak, Revadim and Ein Tzurim—retaining their original names—rebuilt themselves elsewhere in Israel. Indeed, Kfar Etzion that exists today was rebuilt by the children of Gush Etzion who returned in 1967. The glaring difference is that Gush Etzion was destroyed by the Jordanian army and irregular Arab forces. Gush Katif was destroyed by the government of Israel.

A few weeks before the disengagement, I attended the last brit milah that took place in Gush Katif. The parents named the child “Amihai” (“my nation lives”). The grandfather of the baby said, “I invite you all to join us here for Amihai’s Shabbat Chatan [pre-wedding Shabbat celebration]!” I said to the guests at our table, “The children of Gush Etzion returned to their homes after the Six-Day War in 1967, nineteen years after they were driven out when Gush Etzion fell to the Jordanians in 1948. These children too will return one day.” At that moment, Hanan Porat entered the hall to wish the family mazal tov. Hanan was the leader of the Gush Etzion children who returned in 1967. It felt like an omen that indeed, one day, the children of Gush Katif will return to this cherished strip of land.

Listen to Anita Tucker, the well-known spokesperson on behalf of the Gush Katif evacuees, discuss the tenth anniversary of the Gaza disengagement at www.ou.org/life/community/savitsky_tucker/.

1. This section concentrates on Gush Katif and northern Gaza. There were also four settlements in northern Shomron that were destroyed at the same time. The author wishes to thank Anita Tucker of Netzer Hazani for her assistance in preparing this article.

1 1 vote
Article Rating
This article was featured in the Summer 2015 issue of Jewish Action.