Thursday night, March 6th, 2008, Rosh Chodesh Adar Bet 5768: Around eight pm, while my husband Baruch, a student at Yeshivat Mercaz HaRav, and I are enjoying a relaxing supper, a man from the East Jerusalem neighborhood of Jabel Mukaber, wearing a black stocking cap and carrying a cardboard TV box, climbs the five steps from the sidewalk to the courtyard of Mercaz HaRav. He strides forward and rests the box on a stone ledge. Spotting three teenage boys mulling around the dormitory entrance, he reaches into the box and draws out a Kalashnikov rifle.

In the middle of supper, our phone rings. It’s my mother-in-law. “What?” Baruch sounds confused. “No, we didn’t hear the news.” He hangs up the phone and switches on the radio. “There was a terror attack in the yeshivah,” he whispers.

A terrorist walked into the yeshivah’s library, where students were studying Gemara, and sprayed the room with bullets. He killed eight boys and wounded eleven others. Twenty minutes after the shooting began, an off-duty soldier leaped across the street, joining an armed student, who crept out of the main study hall; together they shot and killed the terrorist. It is unclear whether there is a second gunman elsewhere in the yeshivah. Students in the dormitory are being evacuated to homes of married students in the neighborhood.

As I listen to the news, I feel chills. The shock is accompanied by denial. It can’t be. My husband was just in yeshivah an hour ago! This type of thing happens in the news, to other people. This can’t be happening to me.

“You’re what?” I shout. There could be another gunman or a ticking bomb waiting for the police and paramedics who respond to the shooting.

“I need to be there. I need to be with my friends.” From his perspective, this is natural. He was just there. His friends who were there are traumatized. They are all supporting each other, and he feels like he needs to do something.

“No, Baruch, don’t leave me alone!” I am frightened and clingy, and the pregnancy hormones just intensify these feelings. I can’t bear to picture my husband walking into a room full of blood, tears, broken glass and bullet casings. I also don’t want to spend the night alone with my fear. I have no family in Israel and no friends in the neighborhood. Baruch is the one who just missed a brush with death, but I am the one in tears. He sits back down beside me. He won’t leave me crying. He comforts me, though I should be comforting him tonight.

A neighbor invites us to watch the news on TV. Leaning forward on the old mustard yellow couch, we are riveted to the screen. We are interrupted only by friends and family calling to check on us. “Thank God,” I repeat over and over. “Baruch was home.” My husband could have been there, but he wasn’t. Sirens wail and red lights flash into the dark night before the anchorman on the screen, punctuated by scenes of blood splattered on the tile floor of the library. As my husband points out friends and rabbis being interviewed or pacing the sidewalk, I silently thank God for keeping him alive. I thank Baruch aloud for staying home.

More than just a home, a yeshivah is a sanctuary. And we expect people learning Torah to receive an extra layer of Divine protection. Tonight is Rosh Chodesh Adar, a lucky month for the Jewish people, a month when we are saved from our enemies. This is not a time to mourn.

Later, while Baruch tosses and turns in bed, I close my eyes and think how despite tonight’s attack, I cannot picture myself living anywhere but Israel. When I moved here alone after high school, towards the end of the Second Intifada, I knew that I could be exposing myself and my future family to terrorism, but I still chose to live in the land the Jewish people have been praying to return to for thousands of years. With teenage courage, I came in spite of the danger. Tonight, with the determination of a mature adult, I choose to stay, to remain connected to my people and our land. 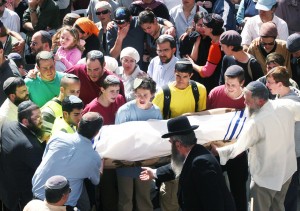 Mourners carry the body of one of the students killed in the terror shooting attack at the Mercaz HaRav Yeshiva in Jerusalem. Photo: Ariel Jerozolimski

By morning, I am calm enough to let Baruch go back to Mercaz HaRav for the funeral. I don’t know any of the dead personally, and relying on the custom of pregnant women not attending funerals, I listen to the funeral on the radio instead. I don’t want to see eight young men buried with their blood-soaked holy books. As it’s a Friday and Rosh Chodesh Adar, there are no lengthy eulogies. I punch my challah dough with all my strength, releasing pain, sorrow and anger, until my muscles feel weak and I sink into a chair, sobbing. I separate a small piece of dough to burn, hoping that this mitzvah will be a merit for the souls of Avraham David, Ro’i, Neria, Yonatan, Yochai, Segev, Yonadav and Doron.

The week following the funeral, I hardly recognize my normally cheerful husband. During the day, Baruch joins groups of friends comforting mourners. At night, he goes to sleep early. One evening, during supper, I try to break through to him.

“I knew all of them by face, but only three learned in Mercaz HaRav. The other five were in Yashlatz, the high school connected to the yeshivah.”

“Were you friends with them?” I probe, hesitantly.

“One.” Baruch pushes the food around his plate. “Doron Mehereta. He was twenty-six. He walked hundreds of kilometers through Ethiopia to come to Israel with his parents when he was just ten years old. Two of his brothers died on that journey. He was a good friend.”

“Some of my other friends were injured.” Baruch continues.

“They were shot?” I lean forward.

“They jumped out a second-story window?” I ask.

“One of the rabbis was too scared to jump,” says Baruch, “so they pushed him.”

“They pushed a rabbi out the window?”

“They had to,” Baruch answers. “They were trying to save his life.”

A month later, I meet Baruch’s chavruta who injured his back jumping out a window. He still wears a brace and can’t sit for more than a few minutes at a time.

Baruch is the one who just missed a brush with death, but I am the one in tears.

Two weeks after the shooting, I elbow my way through a sea of skirts, shoulders and kerchiefs in the ladies’ balcony at the yeshivah, nearly tripping on a clown and a waist-high Queen Esther. I’ve never been here on Purim, and I ask a woman I recognize if it’s always so crowded. She says she’s never seen the yeshivah this full. Someone bangs on a shtender in the men’s section below. We all rise, and the rabbi begins the berachot recited prior to reading the Megillah.

“Blessed are You . . . Who has commanded us to read the Megillah.”

“Blessed are You . . . Who performed miracles for our forefathers, in those days,” his voice rises, clear and strong, “at this time.”

“Amen!!” This response is louder than the first.

“Blessed are You . . .,” he begins in the same clear, strong voice, “Who has kept us alive—” His voice cracks. He pauses. “—And sustained us,” his voice trembles. He lets out one sob, regains his composure and shouts, “and brought us to this day.”

“Amen!!!” everyone shouts. With the women beside me, I whisper my response, choking on tears. We are alive. Why do I have the privilege of standing here now, when the eight murdered boys do not?

This year, Purim falls on Shabbat in Jerusalem, so the mitzvot are spread out from Friday to Sunday. Baruch and I spend Shabbat in Kiryat Moshe. Conversations revolve around the shooting. Now I am ready to learn more. “Where were you when the shooting happened?” I whisper to my husband’s friends’ wives. “Where was your husband? Were you scared?”

I keep getting similar answers.

“Thank God, my husband was home.”

“Thank God, the kids slept through it.”

“Can you imagine if the terrorist had gone into the main study hall instead of the much smaller library?”

“Thank God, none of the victims were married. They left no widows or orphans.”

At first, my stomach tightens at this last response. It seems like an awful thing to say. But I realize that no one is belittling the pain of the victims’ families. This is just the way they relate to the tragedy. These women would never say such a thing in public. Amongst ourselves, however, we understand that this is our biggest fear—to become widows. Thank God, there were no widows
or orphans.

We return to Kiryat Moshe on Sunday to distribute mishloach manot. In one rabbi’s home, Baruch takes up his traditional position as wine pourer, refilling plastic cups as they are passed his way. I sit in the kitchen, chatting with the rabbi’s wife. She picks up two wine bottles and hands them to someone teetering his way into the dining room, freeing up her hands just in time to receive four empty bottles in return. She smiles at me, shaking her head. “The bottles are coming back faster than usual. They need it more
this year.”

It has been nearly eight years, four children, three wars, and countless terror attacks since the shooting in Mercaz HaRav, and I don’t know how this story will end. I am constantly reminded of the daily threat of terrorism. When my daughter awakens from nightmares of being chased by Arabs, I remember. When I read about a baby being deliberately run over at a train stop, I squeeze my baby and remember. When I walk my son to the bus stop in front of Mercaz HaRav to wait for a bus to his school in Har Nof, a neighborhood where five people were butchered in shul, I remember. I hope my children won’t still experience these daily fears in twenty years. Perhaps, by the time they are parents, there will be peace.

Miriam Burstein is a teacher and freelance writer living in Jerusalem.