Rabbi Ya’akov Litman, Hy”d and his eighteen-year-old son Netanel, Hy”d, of Kiryat Arba, were murdered by terrorists on November 13, 2015, near Otniel (south Hevron Mountains), on their way to the Shabbat chatan of Ariel Biegel. He was due to marry Yaakov’s daughter, Sarah Techiya, four days later. I remember thinking, after the initial shock and horror, that they would probably have just a tiny and sad family wedding.

But the people of Kiryat Arba are made of different stuff.

During the shivah, Sarah told Yediot Aharonot, “This evening, instead of wearing a bridal dress, I will sit on the floor with a torn shirt. But very soon, we will marry in a large and happy wedding. We will go on and be happy as Father and Netanel always were. We will not be crushed.” And indeed, as Sarah and Ariel predicted, multitudes came to make them happy and their wedding was broadcast and made waves throughout the world.

The history of modern-day settlement in Kiryat Arba and in the heart of Hevron is of a deeply committed and dedicated community that refuses to be crushed, terrorist attacks and controversy notwithstanding, and which continues to flourish and grow.

Known as the “City of our Forefathers,” Hevron is one of the oldest cities in the world. Kiryat Arba, named perhaps for the giant “Arba” who had three sons, or for the four giants Joshua and Calev encountered while they toured Canaan, or for the four couples buried there (Avraham and Sara, Yitzchak and Rivka, Yaakov and Leah and according to tradition—Adam and Chava) or for all the above, has approximately eight thousand residents, comprised of native-born Israelis and olim from North America, South America, England, France, Peru, India, Ethiopia, Russia and the former Soviet Union and elsewhere.

On the eve of Pesach 1968, Rabbi Moshe and Miriam Levinger and Rabbi Eliezer and Ruth Waldman and their children, joined by a small group of families, rented the Park Hotel in Hevron for the Pesach Seder. They stayed, and in 1971, Kiryat Arba was built. It attained local council status in 1979.

The early years of the Jews in resettled Hevron-Kiryat Arba were not easy. The community was moved from the Park Hotel to a British-built Tegart fort known as the Government House (which housed Jordanian security forces before the Six-Day War), where there was a communal kitchen, a beit midrash for yeshivah students, a multi-aged pre-school, a school for the lower grades, and an apartment for single young women who helped out in the community. Most of the families were Orthodox, many of them students of Rabbi Zvi Yehuda Kook of Yeshivat Mercaz HaRav. Other residents had fascinating life stories, such as a Chabadnik artist Baruch Nachshon, who later became world famous; an Italian convert; and a young French-born yeshivah student named Shlomo Langenauer, today known as Rabbi Shlomo Aviner of Beit El.

Today, approximately 125 Jews live in “downtown Hevron,” in what is known as the Avraham Avinu neighborhood, in buildings that were originally owned by Jews and were repurchased and renovated by the residents. Yeshiva Shavei Hevron is also located there. This old-new neighborhood was created after 1979, when Rebbetzin Levinger and a group of women moved into Beit Hadassah, a building that had been a Jewish medical clinic that had served both Jews and Muslims before the 1929 Hevron Massacre.

People work either in “the Kirya,” as the main neighborhood of Kiryat Arba is called, or in Jerusalem. Local businesses include Bank Leumi, retail shops, medical centers, real estate offices, an optician, a dentist, attorneys, a bakery, a carpentry shop and more. 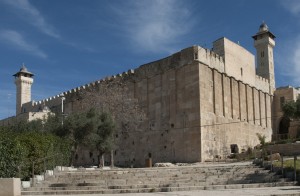 “Kiryat Arba is very much connected to Hevron and the Me’arat HaMachpela,” says Chana (Porath) Idels, who has been living in Hevron since 1968. “[It is because of the Me’arah] that Kiryat Arba was built.”

While Jews and Arabs tend to live in relatively close proximity in Hevron, “security is more or less like all of Yesha [Yehudah, Shomron and Gaza],” says Chana. “In this latest ‘wave’ [of terror], we lost four residents, Hy”d, not to mention soldiers who have been killed while on active duty over the years.” One of the most famous soldiers killed while on duty in Hevron was Colonel Dror Weinberg of Jerusalem, who was murdered by terrorists on a Friday night in 2002, while defending Jews returning home from prayer.

Chana made aliyah from Cleveland two months after the Six-Day War. Her wedding was one of the first in the renewed Hevron, and was held in the Government Building, where the feast was spread out between three army dining halls. She is a mother of nine (“bli ayin hara”) and grandmother of more than sixty (“I never give an exact number—but then who’s counting?”)

“This a great place to live,” says Chana. “There is a real mix here—a variety of religious and secular types and a high level of friendship and cooperation between the various groups and individuals. There are many converts to Judaism [one of whom was born to the Muslim J’aabri clan of Hevron] and a significant number of young couples, including second and third-generation residents; there are many, many births in the community.” It is due to this large, growing demographic that Kiryat Arba is currently experiencing a serious shortage of apartments.

“Many of those who went on to settle the Shomron and elsewhere began their journey in Hevron, Kiryat Arba,” says Chana. “We live the reality that this land is God-given, now and forever.”

The author wants to thank Chana Porath Idels for her invaluable assistance in preparing this article. The author was present in the Park Hotel and the Government House (where she met Moshe Dayan), and lived in Kiryat Arba. Today she lives in Efrat with her husband.

Toby Klein Greenwald is a journalist, educator and community theater director who lives in Efrat, Israel with her family.

1 1 vote
Article Rating
This article was featured in the Spring 2016 issue of Jewish Action.