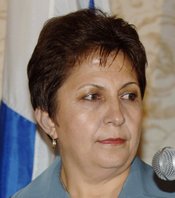 Most people hadn’t heard of Wafa Sultan until an interview on Al Jazeera television in February 2006 propelled her into the spotlight. Since then she has been named one of Time magazine’s 100: “The People Who Shape our World.” In the Al Jazeera interview, Dr. Sultan, a former Sunni Muslim who moved to Los Angeles with her husband and children in 1989, says, “the clash we are witnessing around the world is not a clash of religions, or a clash of civilizations…. It is a clash between a mentality that belongs to the Middle Ages and another mentality that belongs to the twenty-first century. It is a clash between civilization and backwardness, between the civilized and the primitive, between barbarity and rationality. It is a clash between freedom and oppression, between democracy and dictatorship.” According to The Middle East Media Research Institute, the clip of Dr. Sultan’s Al Jazeera interview has been viewed more than one million times.

The clip shows Dr. Sultan, a psychiatrist, being bombarded with questions from a Muslim cleric, but she remains strong in her stance. “The Jews have come from the tragedy [of the Holocaust], and forced the world to respect them, with their knowledge, not with their terror; with their work, not their crying and yelling,” she explains in the interview. “We have not seen a single Jew blow himself up in a German restaurant…. Only the Muslims defend their beliefs by burning down churches, killing people and destroying embassies. This path will not yield any results. The Muslims must ask themselves what they can do for humankind, before they demand that humankind respect them.”

Dr. Sultan, who is in her late forties, grew up in a large traditional Muslim family in Syria. And while she followed the Islamic faith into adulthood, her views began to change in 1979, when, as a medical student, she witnessed the murder of her professor by ultraconservative Muslim gunmen shouting “God is great!” According to an article in with The New York Times, at that point, Sultan began to question the teachings of Islam. “I had to look for another god,” she says. Dr. Sultan’s research into Islam’s holy texts led her to reject the religion; now she considers herself secular. In the Al Jazeera interview she is repeatedly berated for being “a heretic.” She still has family in Syria, but has not spoken to her mother in over two years. “She’s ashamed of me,” says Dr. Sultan.

In an interview with the Jerusalem Post some months ago, Dr. Sultan said that while she is pessimistic about the possibilities of reforming Islam, “transformation” is needed. She believes that women in particular have so much to gain by this. In her lectures, she recounts gruesome tales of “honor killings” in the name of Allah—killing victims of rape, for example, because they shame their families. Her goal is to liberate women living under Islamic oppression. Dr. Sultan reports that she has received a lot of support from the Jewish community.

She is currently writing a book tentatively titled The Escaped Prisoner: When God Is a Monster. Dr. Sultan told The New York Times that she has received several death threats, but she “has no fear. I believe in my message.”