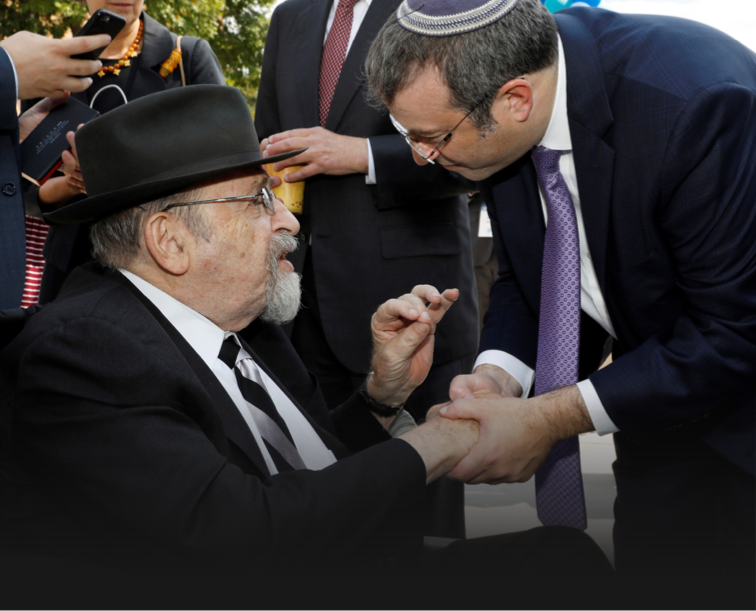 Jewish Action: When did you first meet Rabbi Dr. Norman Lamm?
Rabbi Dr. Ari Berman: Growing up in a Modern Orthodox family I always knew Rabbi Lamm. As I became more serious about my future as an Orthodox Jew, in high school, I began to read his articles and books. I heard him speak when I was in Yeshiva University. So even before I had any sort of personal connection with him, I already saw him as an essential leader of our community. Later in the semichah program and Kollel Elyon, I had a few opportunities to meet with him as he always made it a priority to meet with the next generation of Jewish leaders. Once I began my tenure at The Jewish Center, we began to have a more personal relationship. I was the rabbinic intern under Rabbi Jacob J. Schacter and at the time Rabbi Lamm, who had previously served as rabbi there, was a congregant.

My first interaction with Rabbi Lamm at The Jewish Center foreshadowed his role as a central mentor in my life. My first day as rabbinic intern was on a Sunday morning. I was only twenty-four and spent the morning unpacking our belongings into our new apartment. I was late for Shacharit and forgot my jacket and tie. Rabbi Lamm was present at the minyan and I went over to introduce myself, sharing that I would appreciate any opportunity to spend time with him and get his advice in my new role. Rabbi Lamm looked at me with a smile and said, “Sure, here is my first thought: You need to dress the part of rabbi in order for people to take you seriously as a rabbi.”

If you look at those who eulogized him, so many people were former interns and assistant rabbis at The Jewish Center. In a way, I began the tradition of young rabbis in shul approaching him for advice. I always marveled at how much time he gave me. Rabbi Lamm, even in his later years, was ever the teacher.

JA: What role did he play in your life?
RB: Through our Jewish Center connections, he became a mentor. He taught me how to be a better rabbi, how to shape my career, and how to develop as an intellectual, a thinker and most importantly as an eved Hashem.

He would give me all sorts of advice. He showed me where to acquire different skill sets. He emphasized the importance of learning responsa literature, teshuvot. He also encouraged me to broaden my reading list—considering not just the content, but also the style—including great orators and writers like Abraham Lincoln and Cardinal Neuman.

We would meet after each of my Shabbat morning derashot and he would review what I said. One time we couldn’t meet for a few weeks after I spoke. To be clear, this was about a ten-minute derashah that I had given weeks before. And he repeated the whole thing back to me and explained how it could be improved and developed. I could barely remember what I said.

So much of what I learned was from just being in his presence. Seeing how he interacted with YU lay leaders. Seeing how he counseled families. Who would have known how much these experiences would have prepared me for my own future?

JA: How have the challenges of YU changed since Rabbi Lamm was president?
RB: The more things change, the more things stay the same.

There are two areas that immediately come to mind: the business of YU and the mission of YU.

In the business of YU, there have always been down periods and up periods. When Rabbi Lamm entered, it was a financially difficult time and he was credited with saving YU from bankruptcy. Baruch Hashem, I did not find myself in such dire circumstances, but I too began my tenure during a challenging financial period for YU. The goal in each of these cases was to stabilize YU through a broad base of deep financial support and a sustainable business model. And while there are still challenges ahead especially in this coronavirus era, we have similarly found success over these past couple of years in growing our institution.

When it comes to the mission of YU it is on the one hand exactly the same, and on the other hand very different. In the underlying purpose of YU, there has been no change. YU has always distinguished itself in the world of yeshivot and in the world of universities as educating the next generation of Jewish leaders with the skill sets and values to live as avdei Hashem, impacting the Jewish people and broader society around them. We have always delivered on our promise of a stellar education in both Torah and Madda, and no institution in the world compares to us on this score. But our purpose—educating students who are rooted in our values to meet the challenges and opportunities of the moment—requires us to also shift to speak to the moment. Both on the Jewish and academic side of our daily schedule, we have shaped the education to address the different sociological, intellectual and professional needs and opportunities of the day.

JA: How did Rabbi Lamm prepare YU for the challenges that his successor would face?
RB: Rabbi Lamm fleshed out the educational platform of YU. He worked very hard to establish what YU offers the world. He wrote about this eloquently in his book Torah Umadda. He developed our educational ethos and created a conceptual and pedagogical framework that still propels us forward today.

Interestingly, in Rabbi Lamm’s day, Torah Umadda as an educational philosophy was more controversial. Today, this is not really the case. For a large percentage of the American Orthodox Jewish world, attending college is almost a given. This enables us to open up our enormous Jewish, intellectual and professional resources so that a much larger percentage of our community can benefit from them.

JA: Why is the Orthodox community not producing enough rabbinic leaders that have Rabbi Lamm’s combination of academic and administrative skills?
RB: YU is producing rabbis today that are more prepared to play an impactful role than ever before. The combination of exemplary roshei yeshivah, vast resources at their disposal and rigorous professional training creates an educational experience that is extraordinary. We are producing stellar rabbis who are talmidei chachamim and who also exemplify kindness and compassion. The rabbis, educators and top administrators of shuls, schools and organizations throughout our community are all filled with our graduates. And as the demographics continue to shift in the US, our community is only going to become more important to holding together the Diaspora Jewish community and assuring the connections between the Diaspora and Israel.

But there are some areas where one can note differences between the rabbis of today and yesterday. For example, the rabbi who is widely read with deep training in the broader academic disciplines is perhaps not as much in vogue as in the past. In the past, becoming a “Rabbi Dr.” was more common, as per the model of the Western European rabbi. Great rabbis of the last generation come to mind including Rabbis Jung, Lookstein, Goldstein and, of course, the Rav. Interestingly in Israel, in the Religious Zionist community, the Rabbi Dr. model is on the rise. But even there it is more in the Jewish studies areas rather than in the broader humanities disciplines.

Another area that is different, that Rabbi Lamm would certainly want me to mention, is the amount of energy, skill and focus placed on communicating effectively. Rhetoric to Aristotle was a discipline worthy of serious attention. The amount of time people invest in learning how to communicate effectively has diminished. Rabbi Lamm led a generation of rabbis who mastered this area. His gift of language came with work. He wouldn’t speak if he wasn’t prepared. He started working on his next sermon immediately after Shabbat ended. Keep in mind that at the time he was rotating Shabbat derashot with Rabbi Jung every other week, so he was really spending two weeks per derashah. Today, he would want me to encourage our young musmachim to invest that type of effort as well.

JA: In your hesped you called Rabbi Lamm a “rabbinic artist.” What did he teach you about making the rabbinate a combination of art and science, innate ability and learned skill?
RB: It is not just art as compared to science. It is art as in beauty and aesthetics. There is an aesthetic quality to how one lives life and how a rabbi presents himself, Torah and our values.

What do you feel in the presence of the rabbi? What is the experience like? This is where the magic of rabbinic artistry is created.

JA: What lessons that you learned from Rabbi Lamm have you tried to pass on to semichah students at YU?
RB: To be a leader and person of impact. To never underestimate one’s level of influence. From impacting one’s family to one’s community to our broader society, both personally and professionally—we stand for something holy and special as bearers of our Jewish tradition and the possibilities of positively influencing others knows no bounds.

JA: Which lesson—or example—that he taught you most influenced you in the pulpit and in the YU presidency?
RB: There are many, I will point to one. His personal example of being both pious and personable, walking with dignity and humor. Rabbi Lamm was a very serious person, but he also had a light touch that allowed him to form deep connections with people.

JA: They say that a generation gets the leaders that it needs or deserves. What was it about the times in which Rabbi Lamm served as a leader that demanded his unique skill set?
RB: Rabbi Lamm was of his time but was also beyond his time. He addressed the immediate challenges of Jewish life and thoughts bringing in our set of values—which don’t change—to contemporary issues. The issues change, the values don’t. The values are at the core. That’s what he did so well and that is YU.  Values are the moral compass that continue to guide us through new situations and issues. All of the YU presidents—Richard Joel, Rabbi Lamm, Rabbi Dr. Samuel Belkin, and Rabbi Dr. Bernard Revel have had to navigate different challenges—and they did so by drawing upon values, values that go way back to Moshe Rabbeinu. Yeshiva University is not a 125-year-old story, it is a 3,000-year-old story. Rabbi Lamm was an outstanding representative of our 3,000-year-old tradition—he was of his time and beyond his time. And that is why he remains so deeply relevant to us today. The issues he addressed were of his time, the values he stood for were beyond his time.

Darshan for the Ages by David Shatz