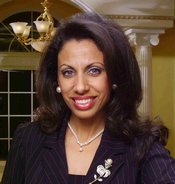 Growing up a Christian in Southern Lebanon, Brigitte Gabriel, like all of her peers, was taught that Jews were evil and Israel was the devil. These days, however, she is a strong advocate for the only democracy in the Middle East. Her outlook began to change in 1975, when she was ten years old, and the Palestinians and Lebanese Muslims declared jihad on the Christians in Lebanon and started massacring them. Gabriel lived in a bomb shelter for the next seven years. By the time she was twenty most of her friends had been killed by radical Muslims. She praises Israel for coming to her aid.

“My mother was wounded by a Muslim shell and was taken to an Israeli hospital for treatment,” she said in an address to students at Duke University in 2004. “When we entered the emergency room, I was shocked by what I saw. There were hundreds of people–wounded Muslims, Palestinians, Christian Lebanese and Israeli soldiers lying on the floor. The doctors … treated my mother before they treated the Israeli soldier lying next to her. They didn’t see religion … they saw people in need, and they helped…. For the first time in my life, I experienced a human quality that I know my culture would not have shown to their enemy. I experienced the values of the Israelis, who were able to love their enemy in their most trying moments.”

Those three weeks in the hospital changed Gabriel’s life. It was at that point that she realized her beliefs about Israel and the Jews based on lies.

Gabriel’s experiences as a victim of Islamic terrorism inspired her to write Because They Hate: A Survivor of Islamic Terror Warns America (New York, 2006). In an article that appeared in Frontpage Interview, Gabriel says that she wrote the book “in the hope that Americans and the west will recognize the eminent threat [of radical Islam’s war for world domination].” In her book, Gabriel discusses the spread of Islamic terrorism throughout the world, and she warns America to take action.

A journalist who began her career as an anchor for World News, an Arabic news broadcast, Gabriel currently lives in the Washington, DC area. A terrorism expert, she is the founder of the nonprofit organization American Congress for Truth—one of whose goals is to “speak out in defense of America, Israel and western civilization.”