What is the legacy of Rav Aharon Lichtenstein? Only too soon, the answer, I fear, will be: It depends on whom you ask.

Already the hints of fault lines are beginning to emerge. On one level, this is only natural. Few, if any, can grasp the depth of a towering Torah personality in his entirety; and, in any event, no two disciples, no matter how close, will discern the master in exactly the same way.

However, in the case of Rav Lichtenstein, the perception of him in very different ways would be misleading, for if there is one thing about his life and teachings that is clear, it is their consistency, his various developments notwithstanding (some of them, such as his view on shemittah, he himself noted). 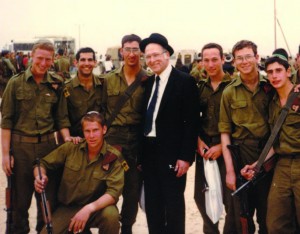 Rav Lichtenstein with some of his students. Courtesy of Yeshivat Har Etzion

Professor Adam Shear has traced the “reception history” of Yehudah Halevi’s philosophic masterpiece, the Kuzari, over the past 800 years. Aside from its superior research and style, Shear’s volume is highly instructive, showing how the very same text can be taken in radically different ways, depending on the time, place and culture. I do not deem it extravagant to mention Rav Lichtenstein in the same breath as such a time-honored giant as Yehuda Halevi–a servant of God, a philosopher of faith more than reason, a lover of language, a passionate student of Torah, a devotee of the Land of Israel and an explorer of disciplines outside the Torah. All this, and more, was Rav Lichtenstein, and perhaps his legacy, too, will follow the highly varied reception history of the Kuzari. I hope not.

One of the emerging fault lines is the “liberal” vs. the “conservative” Rav Lichtenstein. He was “liberal,” for example, because he favored sustaining non-Orthodox Jews’ religious commitment, however attenuated, as better than nothing. He was “conservative,” for example, because a number of his halachic rulings and approaches hewed precisely to the tradition. It is not difficult to imagine this fault line widening as partisans on both sides plumb the writings and teachings of Rav Lichtenstein to support their respective positions.

Rav Lichtenstein simply recognized the lugubrious reality that the majority of American Jewry is distant from Orthodoxy, and expressed the view that no Orthodox Jew would want them lost to the Jewish people altogether.

Both sides would be wrong. Space permits me to cite only one example, and only in outline form at that, among many. Rav Lichtenstein’s rebbe, Rav Joseph B. Soloveitchik, famously responded to an inquirer that, if he could not hear the shofar on Rosh Hashanah in a halachically valid Orthodox synagogue, he should stay home rather than go to the local Conservative synagogue and hear the shofar there. According to some, Rav Lichtenstein fundamentally disagreed with this, showing his “liberal” side. The proof cited is these words of Rav Lichtenstein:

Nor do I share the glee some feel over the prospective demise of the competition…Their [the Conservative and Reform movements’] disappearance might strengthen us in some respects but would unquestionably weaken us in others…The people currently served by these movements–many of them, both presently and potentially, [are] well beyond our reach or ken…Can anyone responsibly state that it is better for a marginal Jew in Dallas or Dubuque to lose his religious identity altogether than drive to his temple [on Shabbos]? (“The State of Orthodoxy: A Symposium,” Tradition, vol. 2, no. 1 [spring, 1982]). 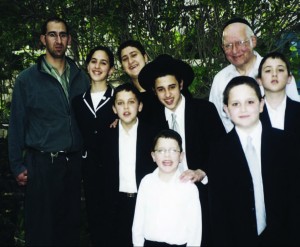 Rav Lichtenstein outside his home in Yerushalayim with some of his children and grandchildren. Courtesy of Yechiel Lichtenstein

This statement clearly addresses Jews “both presently and potentially well beyond our reach or ken.” A person asking a halachic query of a leading halachic authority is not within the purview of Rav Lichtenstein’s dispensation. His comment concerns people radically distant from Orthodoxy, on whom it would never dawn to turn to an Orthodox rabbi with a halachic query such as was posed to Rav Soloveitchik.

Rav Lichtenstein’s comment is not evidence of a “liberal” side; it is, in fact, unremarkable, indicative of neither a disagreement with Rav Soloveitchik in this particular case nor of a general liberal bent. It is merely the common sense by which virtually all Orthodox Jewish leaders, of whatever stripe, operate when they are a clear minority in a Jewish community. Rav Lichtenstein simply recognized the lugubrious reality that the majority of American Jewry is distant from Orthodoxy, and expressed the view that no Orthodox Jew would want them lost to the Jewish people altogether. I find it difficult to imagine that the preponderance of other gedolim, far to Rav Lichtenstein’s right on other matters, such as Zionism, would disagree.

If anything, the brilliance of Rav Lichtenstein’s openness to Western culture and the larger realities of the Jewish people was how steadfastly and congenially he kept all this within the boundaries of tradition. That is neither liberal nor conservative. That is beyond both. That is rooted in the Torah and the mesorah, as Rav Lichtenstein received it faithfully and adapted it faithfully.