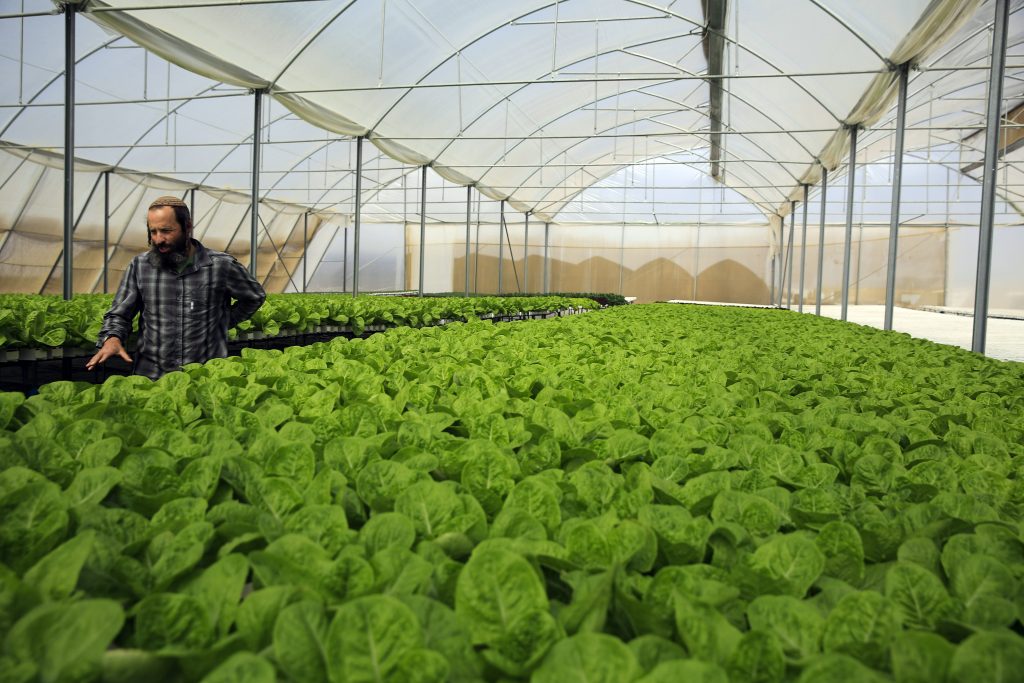 A religious farmer from Bnei Netzarim, a moshav, standing inside his greenhouse, where he grows lettuce and kale. Photo: AP Photo/Tsafrir Abayov

Jewish Action spoke with Rabbi Ezra Friedman, director of OU Israel’s Gustave and Carol Jacobs Center for Kashrut Education and rabbinic field representative for Israel, about different aspects of the mitzvah of shemitah, including new agricultural technologies that are advancing its observance.

Jewish Action: Is shemitah nowadays a Biblical or a rabbinic mitzvah? 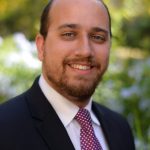 Rabbi Ezra Friedman: That’s a good question with important implications since we tend to be more lenient with rabbinic prohibitions. There are, in fact, heterim (leniencies) that may no longer be valid once the mitzvah becomes Biblically mandated. Nowadays, however, the mitzvah of shemitah is considered rabbinic because we haven’t fulfilled the requirement of “biat kulchem,” that is, when all or most of the Jewish people live in the Land of Israel. The concept of biat kulchem is actually derived from the mitzvah of hafrashat challah, separating challah, which is only d’Oraita in Israel when the majority of Jews live in the Land of Israel (Ketubot 25a). Since the time of the Second Temple, unfortunately there has not been a majority of Jews living in the Land of Israel.

JA: Is it feasible that in the near future the majority of the Jewish people will live in Eretz Yisrael, making the mitzvah of shemitah Biblical?

RF: There are opinions that state that in order for shemitah to be Biblically mandated, it does not suffice to have the majority of Jews living in the Land of Israel, but that every Jew has to know to which shevet he belongs and he must dwell in the shevet’s particular nachalah, portion of the Land. So “biat kulchem,” according to this view, means that the majority of Jews must be settled in the Land with each shevet in its own nachalah.

JA: How should one go about purchasing fruits or vegetables during the shemitah year?

RF: Consumers can do one of the following:

1. Rely on yevul nachri. Most halachic authorities consider produce from fields in Israel owned by non-Jews to be exempt from the laws of shemitah, and therefore the produce does not have kedushat shevi’it. (Fruits and vegetables that have reached a certain stage of growth during shemitah have a special holiness called kedushat shevi’it.) Alternatively, produce from Turkey, Greece or other nearby countries could be purchased without any shemitah concerns.

2. Purchase produce from an otzar beit din, a distribution system run by the rabbinic courts. The beit din hires farmers as agents to harvest their own fruits and vegetables and then distributes the produce to the public. Farmers are paid a flat fee for their time but not for the actual produce. Produce from an otzar beit din has the status of kedushat shevi’it. This approach is unique in that it provides people with the opportunity to benefit from the holiness of shemitahproduce. According to some rabbinic opinions, there is a positive mitzvah to consume such produce (see Megillat Esther on Ramban, Shechichat Asin 3).

3. Purchase produce that is both grown detached from the ground (i.e., in sealed flower pots) and with a roof covering (such as a greenhouse). Such produce is called matza menutak. According to many authorities, vegetables grown in this manner are exempt from shemitahrestrictions.

4. Purchase produce grown on land sold to non-Jews, known as the heter mechirah. Some authorities maintain that this approach is halachically problematic. The OU does not rely upon this heter.

JA: Can you elaborate on the use of greenhouses during shemitah?

RF: There is a dispute among halachic authorities about whether produce grown in a greenhouse is subject to the laws of shemitah. The Gemara suggests that one could plant during shemitah in a house as opposed to a field, “bayit v’lo sadeh,” because such produce is going to be inferior quality due to the fact that a closed environment is not a natural habitat for plants. The Chazon Ish held that produce planted in an enclosed building, in sealed plants or sealed pots, is exempt from the laws of shemitah.

Rav Nissim Karelitz maintained, however, that despite the fact that greenhouse produce is in a closed structure, it is not exempt from the laws of shemitah. He opined that when the Gemara stated “bayit v’lo sadeh,” it was referring to growing produce in an ordinary house, not a greenhouse—which is an environment that is specially made for plants to flourish.

There is some extraordinary agricultural technology being developed in Israel that is really impacting the observance of shemitah.

In addition, Rav Shmuel Wosner expressed concern that if greenhouse produce is exempt from the laws of shemitah, every farmer in Israel will build a greenhouse. This, he believed, is problematic as the mitzvah of shemitah will, over time, be forgotten.

Most posekim do not agree with Rav Karelitz, and posit that if a plant is not connected to the earth in any way (it is grown in a planter that is sealed on the bottom, or it is grown above ground), the laws of shemitah do not apply. Rav Ovadia Yosef and Rav Tzvi Pesach Frank took this position as well. They state that since plants that are grown in a greenhouse are “lo k’derech,” not the way we plant normally, it is acceptable to plant and grow such crops during shemitah.

For a greenhouse to be exempt from shemitah, the floor should be lined with a thick plastic sheeting to ensure that the produce does not derive any nourishment from the ground; there also must be an intact roof.

Greenhouses are becoming more popular as the technology gets more advanced. Israel is actually quite a leader in this arena. Of course, not every vegetable can be successfully grown in a greenhouse. 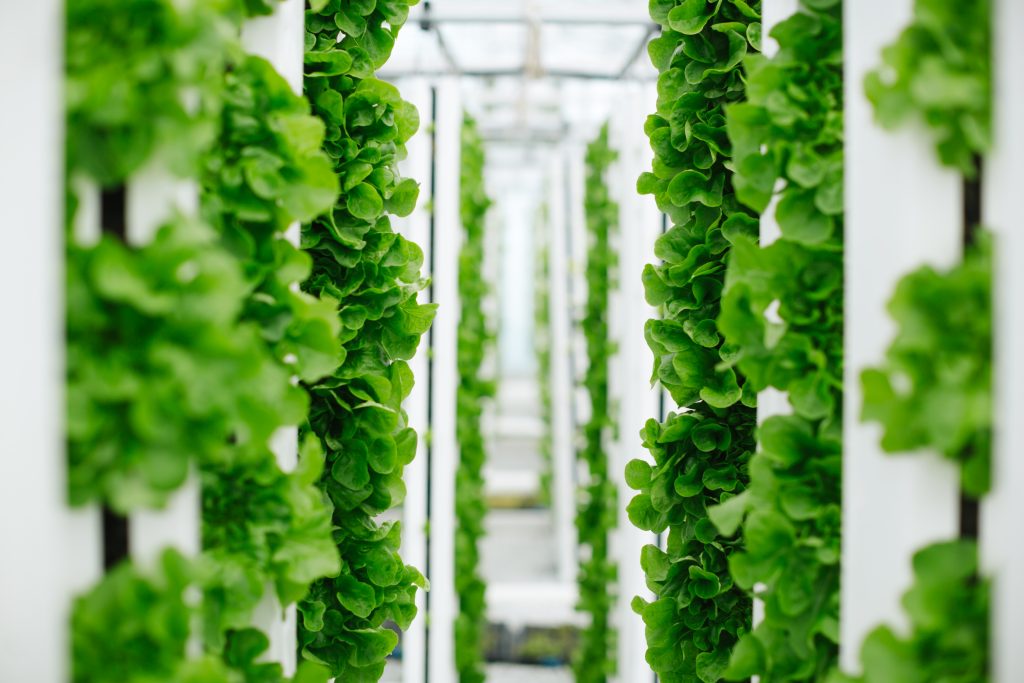 Another new technology involves growing produce vertically. According to certain halachic authorities, since vertical hydroponics, which is sometimes grown outdoors, differs greatly from traditional farming, the laws of shemitah do not apply to produce grown in such a manner.

JA: How is technology impacting the way we observe shemitah? Are there modern agricultural techniques that assist in the observance of this mitzvah?

RF: There are quite a few stories involving owners of wineries who decided to observe shemitah and take a break during the seventh year and saw that the quality of their grapes and wine was exceptionally terrific, both in the year before shemitah and the year after. But there is also some extraordinary agricultural technology being developed in Israel that is really impacting the observance of shemitah.

One new development is high-tech storage facilities. I recently visited a company that is developing technology to store cabbage and other vegetables for months at a time. The company built a hangar where nitrogen is used to increase the vegetables’ shelf life (oxygen causes food to spoil faster). The result is that the cabbage stored there can remain fresh for months. This could be tremendously helpful during shemitah, enabling vegetables from the previous year to be stored. Imagine that one day we will be able to store cabbage, tomatoes, peppers and other vegetables for months at a time, similar to the way we store wheat!

Another new technology involves growing produce vertically. According to certain halachic authorities, since vertical hydroponics, which is sometimes grown outdoors, differs greatly from traditional farming, the laws of shemitah do not apply to produce grown in such a manner. I personally feel that the country could benefit immensely were the Israeli government to invest in high-tech agricultural technologies, as this could result in a steady supply of fresh locally grown produce during shemitah, leading to greater observance of this precious mitzvah.

We at the OU Israel Center’s Gustave and Carol Jacobs Center for Kashrut Education, the kashrut education arm of the OU, are working with the nonprofit Institute for Torah and the Land of Israel (Machon HaTorah VeHa’aretz). The Institute, which approached the OU to learn about our kashrut standards and procedures in Israel, focuses on halachah and mitzvot hateluyot ba’aretz, such as terumah, ma’aser, shemitah, et cetera. It provides training sessions for rabbis, maintains a few greenhouses and oversees a large otzar beit din. OU rabbis are currently working in partnership with the Institute to learn new farming technologies with the aim of certifying more agricultural produce.

JA: There seem to be quite a few loopholes and ways to circumvent the mitzvah of shemitah, but aren’t we then defeating the purpose of the mitzvah? What are the lessons of shemitah?

RF: Chazal are clear about what shemitah comes to teach.

Firstly, just as there is Shabbat, a day of rest and spiritual elevation for the world, so too the land must benefit from a spiritual Shabbat, a year of rest. On Shabbat we focus on our Creator and His world. Similarly, every seven years we spend time appreciating Hashem’s creation and acknowledging the fact that He is the Creator.

Another main theme of shemitah relates to the statement of Chazal: “Zar’u sheish, veshametu sheva, lada’at ki ha’aretz sheli—Plant six and take a break on the seventh to know that the land belongs to Me.” We work the land for six years; we build, we mow, we fertilize, we weed, we water, and invariably we forget that we are not the genuine owners of the land and begin to think the land is ours. But when we have to keep the land idle for an entire year and not be busy with it at all, we cannot help but realize that it’s not our land, it’s Hashem’s land. During shemitah, the notion of ownership is null and void, and we watch our neighbors, our friends and total strangers walk into our field and take our produce. The message is clear: You think you’re the boss? You’re not.

JA: How does this mitzvah apply to those of us who live in America—does shemitah really affect us here in the States?

RF: When purchasing Israeli products and fresh produce from Israel, kosher consumers in the US must check for a reliable kosher certification. Oftentimes, Israeli produce or fruit or vegetable sources in Israeli products found in US supermarkets during shemitah are grown on land sold to non-Jews through the heter mechirah or by farmers who do not observe the laws of shemitah. Because during the shemitah year, many in Israel do not rely on the heter mechirah, farmers relying on the heter increase their export quantities. American consumers must therefore be careful to ensure that all produce from Israel as well as products from Israel have a reliable kosher certification.

The OU will only certify fresh produce in Israel that is either grown prior to shemitah, grown outside of the halachic boundaries of Israel, or grown on land owned by non-Jews. As stated above, the OU does not rely upon the heter mechirah. It is also important to note that the concern about produce grown during shemitah applies in the year following the shemitah year, shanah sheminit, as well.

3.3 3 votes
Article Rating
This article was featured in the Winter 2021 issue of Jewish Action.