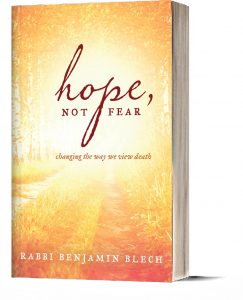 I never really thought much about death until my own father’s sudden death seven years ago. Until then it had been an abstract, sad concept that I didn’t ever wish to discuss in detail. Though my father had been seriously ill and recovered, I had never before entertained the idea of him actually dying.

The issue is, we don’t talk about death much or what happens to those we love after their bodies die. We believe in the concept of souls, and we feel the presence of those who are beloved, but in our universe, as in our belief system, everything dies, except Hashem, Who is eternal. While Judaism and Torah focus, in large part, on life and the living and the work we must do in this world, it makes sense to explore the topic of death, at least somewhat, to allay our own fears of the inevitable and to comfort those facing the waning months and years of their lives.

Rabbi Benjamin Blech, a professor of Talmud at Yeshiva University and beloved pulpit rabbi in Oceanside, New York for close to four decades, is a warm, congenial writer of more than a dozen books, including The Complete Idiot’s Guide to Understanding Judaism. He takes on the topic of death in his most recent book, Hope, Not Fear: Changing the Way We View Death. The book is framed in the context of his receiving a terminal medical diagnosis of cardiac amyloidosis; Rabbi Blech’s goal in addressing the topic was not only personal; it was urgent.

As his six-months-to-live diagnosis extended to six years and counting, Rabbi Blech, may he live and be well, used his time to construct an honest, comforting, and sometimes unorthodox,  description of the Jewish view of death. Like his other books, it is written for the layperson; it is not overtly academic or scholarly. Its accessibility to people of any background, including non-Jews, is one of its strongest attributes.

Rabbi Blech spends roughly the first third of his book expounding on every cliché, relaying every midrash and rabbinic story I have ever heard about death, and a few I hadn’t, invoking names as varied as Woody Allen, Osama bin Laden, Rabbi Eliezer, Indian philosopher Rabindranath Tagore, Ernest Hemingway and Steve Jobs. He spends the second third of the book discussing the fate of the body and soul, sharing a vast, and in some cases eye-opening, array of medical and paramedical information regarding near-death experiences (NDEs) and the thoughts of those who have “been to the brink” and lived to tell about it. The final third of the book, likely the most powerful—and consequently the most useful—provides Rabbi Blech’s five major lessons of how to live when facing death.

The Torah’s Silence
Rabbi Blech dedicates a few pages to the silence of the Bible on what happens after death, then repeating in the name of the late Professor Herbert Chanan Brichto, what many have said before—that the Written Torah was “meant to teach us how to improve our earthly status, how to live life to the fullest, how to conduct ourselves in a way that would be pleasing to the Creator.” The afterlife was not mentioned “precisely because it was a given,” he wrote.

What the Bible does tell us is how God created life, how He created man out of dust and breathed into his nostrils the breath of life (Genesis 2:7). This concept of the breath of life, what it means and what it comprises, are discussed in considerably more detail in other books that invoke more Kabbalistic ideas, including those referring to the universe one lives in today versus the various universes one can inhabit throughout their lives on earth and beyond. Although Rabbi Blech references some of this, it’s clear his interest lies decidedly elsewhere—specifically, in the reports from those who have traveled away from their bodies and were somehow pulled back to earth and the accounts of doctors and nursing staff who have witnessed NDEs.

NDEs and Science
Rabbi Blech presents death as a continuation of that bright-light-at-the-end-of-the-tunnel concept, reported across cultures, religions and continents, by children and adults. It’s clear in the way Rabbi Blech presents the evidence as a vibrant and growing academic discipline that he finds this idea palatable and comforting.

Whether we have six months, ten years or forty years left on this earth, we are constantly presented with options for how to spend our time.

He explains how surgeons and nurses are instructed in various hospital settings to not speak off-the-cuff even if a patient is clinically brain dead, because multiple patients have come back and told them that they heard every word that was said.

Rabbi Blech expresses the idea that all NDEs share in common the experience of an aborted journey (i.e., that whatever was about to happen was halted and the person was sent back into his or her body). “Much as they were tempted to go forward to that brilliant light at the end of the tunnel, they hear the decree to go back because their mission in life was not yet accomplished” (emphasis is Rabbi Blech’s).

Conversely, Rabbi Blech uses this idea to comfort those who have dealt with the premature death of others, particularly young people, relaying both rabbinic and medical metaphors about people “going home because their work was finished.” Reminding us to do mitzvot in this world only, he also refers to a well-known story told by Rabbi Yisrael Salanter of a wealthy man who saved his money for after his death, when he planned to write a really big check. After he passed on, the Heavenly court replied, “We are truly sorry, but here we do not accept checks—only receipts.”

The Five Lessons
Since we know death is inevitable, the material point, Rabbi Blech concludes, is that we need to use the time we have left well. Whether we have six months, ten years or forty years left on this earth, we are constantly presented with options for how to spend our time. Those with serious diagnoses likely feel more pressure to choose wisely. To Rabbi Blech, his five major lessons of life are the key to facing death with confidence: the power of faith, purpose, optimism, miracles and prayer.

In this chapter and in his final summation, Rabbi Blech is at his most convincing. He does his best to show that living gratefully and optimistically, in the presence of a loving God who makes miracles for us every day, is the best kind of life. He stresses that a life filled with missions realized and prayers offered to our beneficent Creator is a life that leaves little time for doubt about the future. Beware the pessimist, he warns, the one who looks at a bagel and sees only the hole, not the bread. “He is a person who thinks that the chief purpose of sunshine is to cast shadows,” Rabbi Blech writes. Such people, he says, tend to live shorter and less healthy lives, according to a Mayo Clinic study which noted that pessimists have a 19 percent increase in the risk of death.

One of the most powerful portions of this chapter is Rabbi Blech’s focus on the power of purpose: “What I found myself thinking of, when I believed I would shortly die, was what I could do to make myself worthy in God’s eyes of longer life. Not because I am a rabbi but because I sincerely believe that everyone has to recognize that they are put here on earth for a purpose. It’s imperative to identify the reason for our presence in the world—what is it that we contribute to society at large and composes our legacy for the future? Then we have to pursue that purpose in a way that would make our absence noticeable and, for as long as possible, our disappearances impossible.”

While this shows how very tethered Rabbi Blech is to his life and his life’s work here on earth, it is also a truly instructive message for every person. Contemplation of death may be something we should read about, think about and work to be better prepared for, but it’s not the goal of life. The goal of life, Rabbi Blech concludes, is to accomplish what God put us here to do. A life well lived is not punished with death, and therefore not something to fear; rather, death is achieved when our missions are complete.