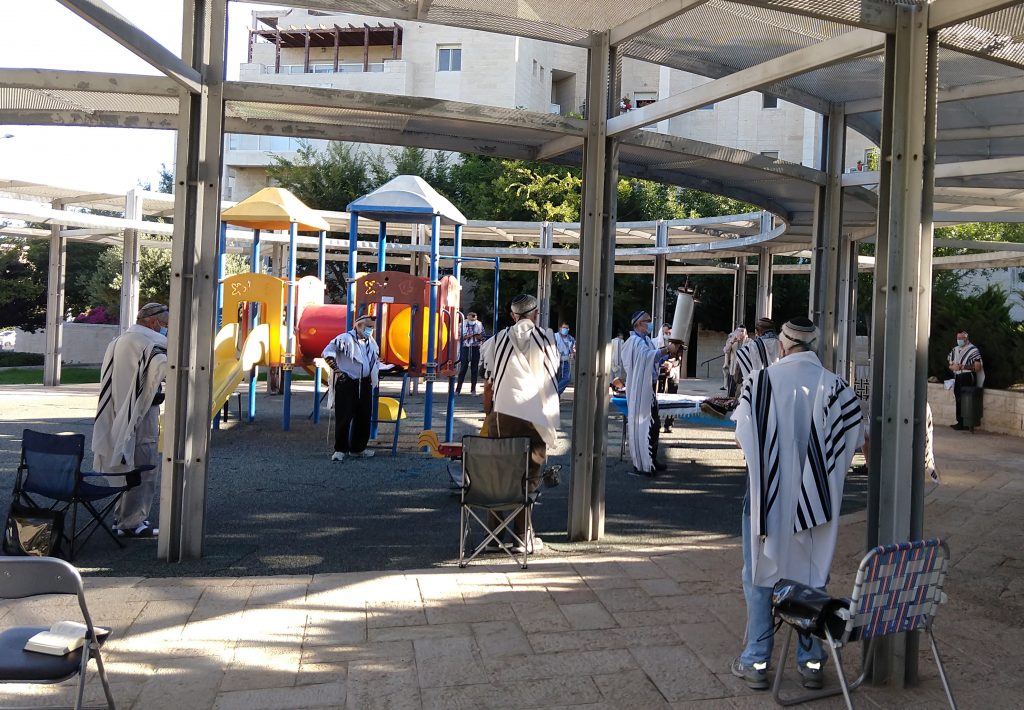 The writer’s socially distanced morning minyan in a playground near his home in Jerusalem.

Have you ever fantasized about your ideal shul? What kind of shul would it be? What would it look like? What minhagim would it follow? What would make it the perfect shul for you?

I am one of those people who cannot abide talking during davening. Shuls seem to have so many ongoing distractions: doors opening and closing, people wandering through the aisles, candymen handing out lollipops to the children and, of course, that one persistent reprobate who says every word so loudly that you can’t keep to your own pace. All that makes it hard enough for someone like me to achieve at least some fleeting moments of concentration, without having to try to close my ears to the needless conversations of some of my neighbors.

Although with the passing years I think—I hope—I have learned to be more tolerant and less judgmental, the talking still has a domino effect in my mind. Even if I can ignore what is being said, somehow I can’t ignore the fact that it has been said. Inevitably my thoughts turn to why was it necessary for the offender to talk at all, and doesn’t he realize how much his chattering disrupts the kavanah of those around him? Even if the spoken remark lasts only a second or two, the annoyance it causes tends to reverberate in my mind for much longer.

So sometimes I find myself conjuring up my ideal shul in my head. The inspiration for my ideal shul came from a Shabbat morning davening I once experienced, many decades ago, in the Brooklyn, New York shtiebel of the Kopycznitzer Rebbe, Rabbi Moshe Mordechai Heschel (1927-1975). As I remember it, it wasn’t a particularly large or ornate shtiebel, nor was the crowd very numerous. But what struck me was the square cubicle that stood near the front of the shul to the right of the aron kodesh. Its wood-paneled walls rose about six feet high, leaving the top open, and there was a door on one side. This was where the rebbe davened, out of sight of his kehillah. The door remained closed except during the Amidah, when he would open it, presumably so there should be no doubt that he was part of the minyan at that point. Rabbi Dr. Shnayer Leiman, professor of Jewish history and literature in the Department of Judaic Studies at Touro College, tells me that this is a well-established practice among certain Chassidic groups, and that not a few rebbes have davened in this way.

There was something about being part of a minyan, yet davening in solitude as the rebbe did, that appealed to me. What, I dreamed, if we could build a shul which was filled with maybe fifty or a hundred such cubicles, one for each member. Once inside our own makom kavu’a cubicle, each of us could daven quite alone, each in his own dalet amot. There would be no distractions, because all you could look at would be the four plain walls around you. Best of all, there would be no talking, because you couldn’t see anyone else to chat with.

There was no one close by whose talking could disturb me, no aisles for anyone to stroll along, in fact no one near enough to distract me at all.

As my friends pointed out when I described my plan, there were many, many problems with it, but I tossed them off with the unencumbered zeal of a dreamer. Some halachic challenges were thrown at me, but by definition a fantasy doesn’t have to conform with reality, halachic or otherwise. Then there were the practical objections, each of which I rebuffed with unswerving confidence. How would anyone know when the aron kodesh was open or when the Sefer Torah was in motion and they would need to stand? Obviously, the aron kodesh and the bimah would need to be built on high platforms, so that they could be seen above the walls of the cubicles. But how would the gabbai know whom he could call for aliyot and other kibbudim? He, too, would need a platform so that he could look down into the cubicles and see who was there. Where would the women sit? Each would have a cubicle of her own, in a section behind the men. (No one would ever question the validity of the mechitzah in my shul.) What about children? Sorry, not allowed. What would be the shul’s name? Kehillat Am Levadad Yishkon, of course.1

I carried this vision with me for many years, retreating into it whenever my neighbors in shul caused me some annoyance or other. But one of the ways the social distancing necessitated by the coronavirus pandemic affected me was that it made me realize that not only was my ideal shul just a dream, it was in no way ideal.

Suddenly, I found myself actually living out my fantasy, either alone in a room with my computer in a Zoom davening, or alone on my balcony in a “mirpeset” minyan with the chazzan high up on another floor. There was no one close by whose talking could disturb me, no aisles for anyone to stroll along, in fact no one near enough to distract me at all.

Even when outdoor minyanim became permissible in courtyards and gardens, the strict limit on the numbers of people who could gather in any one group and the enforced social distancing discouraged all except the most determined kibbitzer from bothering me during davening.

There is no doubt that davening alone in this way allowed, at least on some occasions and on some level, for greater concentration and introspection. But I began to actually miss the interaction with others. Not the talking, of course, but the fraternity of joining in the responses together with those seated right next to me, the sharing of a slightly raised eyebrow if the chazzan went off key or mispronounced a word, the communal smile of recognition if he introduced an old and favorite melody.

I came to realize that there is enormous value in having the same familiar and valued friends around you, whose fellowship you trust to help carry your tefillot toward the heavens. That you can enhance your own kavanah by watching how others focus their minds, and that maybe you, too, might unconsciously be helping them. That Hillel did not say “Al tifrosh min hatzibbur”2 lightly, because the tzibbur has enormous value. And not least, as famed author Rabbi Berel Wein elegantly puts it in his commentary on Hillel’s timeless adage, “The community helps mitigate one’s tendency toward self-righteousness, selfishness, and narrow vision.”3

So Kehillat Am Levadad Yishkon is no more, a casualty of the coronavirus. But what will I replace it with, what kind of shul should I build instead?

David Olivestone, a member of Jewish Action’s editorial committee, belongs to what he describes as “really a very quiet shul” in Jerusalem. For more of his thoughts on talking in shul, see his previous article in Jewish Action, “What Exactly Is It that God Hears? (summer 2014).

Perspectives on Tefillah
The Power of Tefillah By Chaim Aryeh Z. Ginzberg