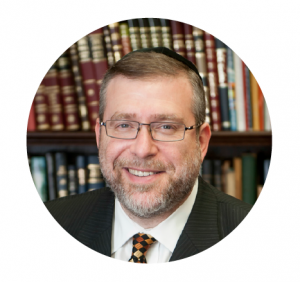 Rabbi N. Daniel Korobkin, MA, MS, is morah d’atra of Beth Avraham Yoseph of Toronto Congregation (“the BAYT”). He is the author of an annotated translation of The Kuzari: In Defense of the Despised Faith (New York, 2013).

John Locke, the seventeenth-century social philosopher, first wrote about the need for a separation of church and state. He argued that the state should separate itself from the church, not the other way around.1 The sole role of government, he felt, is to protect its citizens’ rights from being violated by others and not to impose morality. But there’s every reason for the church to remain attached to the state. The church provides the state with a vital flow of citizens who are rooted in the very morality and virtue that the state is not equipped to provide.

Which leads to the question of the day: should a rabbi be discussing politics in shul? Absolutely and resoundingly, yes. A Judaism that limits itself to halachic issues like Shabbat or the kashrut status of a fleishig spoon that fell into a milchig pot dangerously minimizes the Torah’s significance. As members of the larger society, and as a nation that is expected by our Creator to be a positive influence upon that society, it is our duty to stay abreast of and be part of the social and political fabric of our time. As religious Jews, just as we view our own lives and activities through a prism of Torah, so should we view the world around us with that very same perspective. 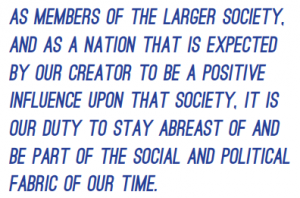 Some rabbis may be fearful of discussing politics lest they face fallout or rejection. But their fears are unfounded. Many congregants are looking for religious guidance in the political sphere, and the proper responses to current events are almost always found in the Torah. As the Mishnah states, “Hafoch bah, v’hafoch bah, d’kulah vah! Turn the Torah over and over, for everything is contained within it.”2 If we listen to the political pundits on Fox News and CNN, whose opinions are informed by their own biases and preconceived notions, surely we’ll want to listen to what our rabbi, whose opinion is enlightened by the Torah, has to say.

During election cycles, political discussions become more delicate and dicey. But here as well, the rabbi should not shy away from discussing the important political issues. He should provide his congregants with a weighted list of priorities and guidelines that will enable them to decide more wisely which candidate will best be able to deliver on those issues. This list might include such priorities as a strong State of Israel, reducing crime and civil unrest, creating a strong economy with ample jobs and productivity, dealing compassionately with the immigrant crisis and the perseverant courage to combat terrorism and other threats to democracy.

But the rabbi should fall short of endorsing political candidates. Endorsing candidates from the pulpit is the “third rail” of rabbinics. Besides the legal considerations of endorsements by a member of a non-profit organization (consult with your shul’s lawyer), there are some very practical reasons why a rabbi should not be making political endorsements.

For one thing, it is rare for one candidate to emerge clearly and unequivocally superior for both society and the Jewish people while the other candidates emerge as being entirely wrong. It may be unwise for a religious leader to put all his eggs in one basket. Past candidates who presented themselves as being strong, say, on supporting Israel have so often proven to be fickle and disappointing. Our sages warned us about not investing too much in our politicians because they realized that regardless of campaign promises, politicians act for themselves first and for everyone else second.3 Even Rabbi Akiva was mistaken in choosing Bar Kochba as the Messiah.4

During the French invasion of Russia in 1812, the great Chassidic leaders were at odds as to which side to support. Rabbi Levi Yitzchak of Berditchev, Rabbi Yisrael (“the Maggid”) of Koznitz and other great rabbis supported Napoleon, feeling that he would free the Jews from Czarist anti-Semitism and oppression. But Rabbi Schneur Zalman of Liadi, the first Lubavitcher Rebbe, supported Czar Alexander I, arguing that while Napoleon might free the Jews from their physical shackles, he’d also “enlighten” them and free them from their religious strictures as well. Today, generations later, can anyone say with certainty which ruler was better for the Jews? 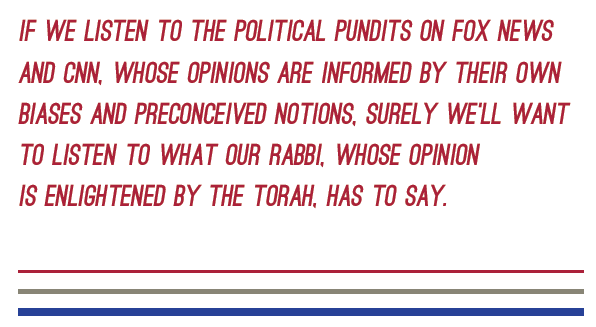 But even more compelling than the lack of a crystal ball, a rabbi would be well advised to avoid endorsing candidates because in the end he will invariably estrange himself from a number of his constituents. He needs to be everyone’s rabbi. At a life-cycle event such as a wedding or God forbid, a funeral, each and every family that is part of the shul must feel comfortable and close with their rav. But if last week the very right-leaning rabbi left a very Democratic family with resentful feelings because of his endorsement, this would create an undue strain on that feeling of closeness, and the rabbi’s ability to be a source of comfort and guidance could be compromised as a result. Politics should never get in the way of the rabbi’s safe space and approachability.

Finally, and perhaps most importantly, the rabbi must be careful not to overstep his privilege. The rabbi is a spiritual guide and mentor, not a religious dictator. The greatest mentors are those who foster independent thinking and decision-making. A good rabbi respects his congregants’ independent ability to think critically and come up with their own conclusions after weighing all the factors, be they religious or secular.

Of course, if a congregant approaches the rabbi privately and asks for his opinion, the rabbi may choose, at his discretion, to reveal which candidate appears to be best at the moment. But that’s quite different from a wholesale endorsement from the pulpit.

In our weekly Shabbat blessing for the United States (or Canada), we pray that Hashem imbue our leaders with proper wisdom and counsel. Amidst all the uncertainty of the current US election cycle, perhaps even more important than discussing politics, the rabbi would do well to lead his congregation in kavanah-filled prayers for the future safety and well-being of this great country and the Jewish people. 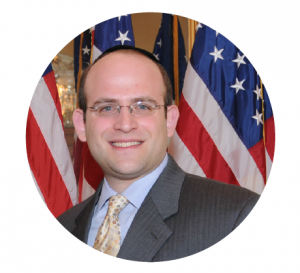 Rabbi Akiva Males began serving as rabbi of the Young Israel of Memphis in the summer of 2016. Prior to that, he served as a pulpit rabbi in Harrisburg, Pennsylvania.

In this heated election cycle, it is hard to find anyone lacking deeply held political opinions. That is precisely why I believe it is in the best interests of pulpit rabbis to keep their political views to themselves. It’s simply a bad idea for a synagogue rabbi to become clearly identified as politically blue or red.

Becoming an outspoken supporter or opponent of any one political candidate or party can end up jeopardizing a synagogue’s non-profit—otherwise known as its 501(c)(3)—status. According to the IRS web site:

. . . Under the Internal Revenue Code, all section 501(c)(3) organizations are absolutely prohibited from directly or indirectly participating in, or intervening in, any political campaign on behalf of (or in opposition to) any candidate for elective public office. Contributions to political campaign funds or public statements of position (verbal or written) made on behalf of the organization in favor of or in opposition to any candidate for public office clearly violate the prohibition against political campaign activity. Violating this prohibition may result in denial or revocation of tax-exempt status and the imposition of certain excise taxes . . . .1

Moreover, becoming an outspoken supporter or opponent of any one political candidate or party limits a rabbi’s ability to reach the greatest number of Jews possible.

Every pulpit rabbi hopes to create a shul atmosphere wherein as many Jews as possible will feel welcome and comfortable. Surely, this is based on Hillel’s teaching in Pirkei Avot (1:12): “Strive to be counted among the disciples of Aaron—love peace and pursue peace, love all people and draw them nearer to the Torah.”

We want all of our Jewish brothers and sisters—no matter which lever they pull in the privacy of the voting booth—to feel they have a home in our synagogues. This isn’t simply because congregations hope to increase their membership rosters. As Torah-observant Jews, we truly believe that each and every Jew’s life will be enriched by our Torah and mitzvot, which will in turn benefit the entire Jewish people. Let us never forget that sharing the beauty of our Torah with each member of Am Yisrael is our ultimate goal.

Knowing people take their politics so seriously, why would we want to risk limiting our ability to share the vibrancy of our Torah with as many Jews as possible? In today’s politically charged atmosphere, if a synagogue’s rabbi is outspoken with his political opinions, he will inevitably alienate some wonderful Jews who differ in their politics from his sphere of influence. I have seen passionate shul-goers on both ends of the political spectrum walk away from congregations where they had spent years of their lives after feeling that their candidates or political parties were disrespected. 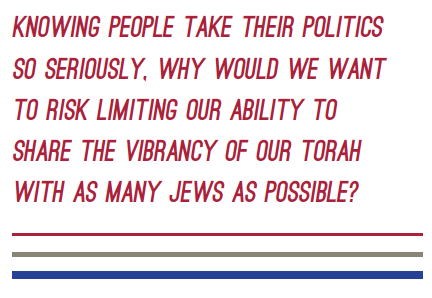 Furthermore, taking sides politically limits a rabbi’s effectiveness outside of shul. Congregational rabbis have important roles to play in matters affecting the community, both Jewish (locally, nationally and in Israel) and non-Jewish. Some of those whom we need to work with on those issues surely harbor different political opinions. Pragmatism dictates that wherever possible, we not allow politics to get in the way of achieving our goals.

This idea is readily apparent to anyone familiar with the important work of AIPAC (the American Israel Public Affairs Committee). In explaining their great efforts to remain bipartisan in March of 2016, AIPAC’s Executive Director Howard Kohr remarked, “Now, there are those who question our bipartisan approach to political advocacy, but unless any one party controls the White House, the Senate and the House of Representatives—and controls them forever—bipartisanship is the only way to create stable, sustainable policy from one election to the next.”2

In today’s heated political environment, if we wear our politics on our sleeves, we may end up turning those who could have been important allies into unnecessary adversaries. Why would anyone choose to undermine their own efforts?

The Jewish community has plenty of people and institutions well-suited to express political opinions. Synagogue rabbis, however, should remain politically pareve.