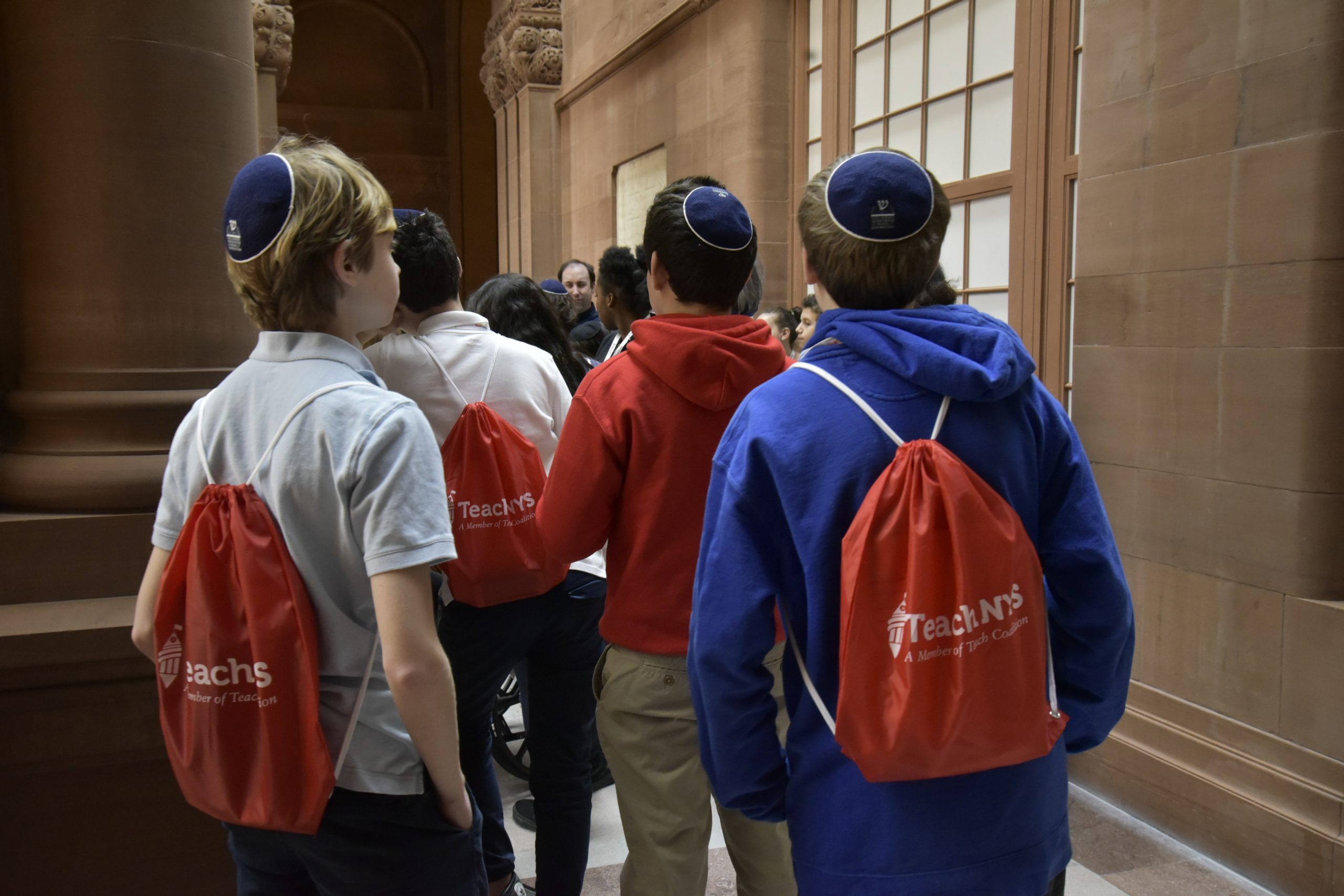 Students walking the halls of New York State Capitol building in Albany on the 2019 Teach NYS Mission to Albany. Since 2017, Teach NYS, along with thousands of parents and students, has worked closely with bipartisan policymakers in Albany each year to advocate for more funding of the program to ensure that all students have access to highly qualified STEM teachers. Photo: Tom Semeraro

For Heichal HaTorah, a boys high school based in Teaneck, New Jersey, the New Jersey STEM program is a “win-win” situation.

“It’s beneficial for our yeshivah and for our parents,” says Teri Normand, COO of Heichal HaTorah.

The groundbreaking program funds STEM (science, technology, engineering and math) teachers in New Jersey private schools, enabling Jewish day schools and yeshivot to hire skilled and experienced teachers without impacting their bottom line. “It’s been an excellent source of new qualified teachers and a great way to use our funds in other areas,” says Normand. Through STEM NJ, the NJ Department of Education pays public school teachers to teach in nonpublic schools after the public school day ends. This past year, Heichal HaTorah hired four public school teachers to teach subjects such as computer science, algebra and calculus. The yeshivah hopes to have a total of seven teachers in the program next year. Heichal HaTorah is “thrilled to be part of the program,” as it has saved the yeshivah thousands of dollars in teacher salaries. “It’s important for our parents to know that we are looking for ways to defray costs,” Normand says.

This school year (2021-22), STEM NJ has twenty teachers teaching in thirteen schools, eleven of which are Jewish day schools, according to Adam Katz, associate director of government programs for OU’s Teach Coalition. Founded in 2013, Teach Coalition is a multi-state grassroots movement devoted to advocating for nonpublic school funding and resources. Teach NJ, Teach Coalition’s New Jersey branch, championed and advocated for the funding of STEM NJ in Trenton, successfully helping to usher in a funding source for the entire nonpublic school community.

Participation in the program grew over 300 percent in its second year (2021-22 school year) and is expected to more than double in the upcoming school year. Through Teach NJ, twenty-three schools, including nineteen Jewish schools, recently applied for forty-three teachers to teach in their classrooms for the 2022-23 school year.

In Far Rockaway, New York, Torah Academy for Girls (TAG) is one of dozens of Jewish day schools and yeshivot benefiting from a similar state-funded program. STEM New York is a first-in-the-nation program that reimburses nonpublic schools for the salaries of qualified STEM teachers of grades 3 to 12. “This is the fifth year we are in the program,” says Dr. Shmuel Reisbaum, executive director of TAG.

This past year, TAG recruited new STEM teachers for vacant positions and used the STEM funding it received to increase the salary of these open positions so high-caliber teachers could be recruited for these roles. “We hired a number of new general studies principals this year, and we told them all the same thing: ‘be sure to hire STEM teachers with the relevant graduate degrees or NYS teaching certification that will qualify them to be reimbursable.’ We hope this program will continue to grow and include other subject areas such as ELA and history,” says Dr. Reisbaum.

“STEM NY is a very sensible program,” says Rabbi Ephraim Blumenkrantz, executive director of Bnos Bais Yaakov in Far Rockaway. “STEM is the future—and it brings our students to the next level.” As a result of STEM NY, Rabbi Blumenkrantz has been encouraging his STEM teachers to obtain the necessary degrees in order to qualify for the program.

For many schools, the STEM programs are playing a critical role in addressing the teacher shortage—specifically with regard to math and science teachers, where the challenge is most pressing. Ronit Tarshish, currently a regional field director for Teach Coalition, is well aware of the difficulty many Jewish day schools have in finding and retaining teachers. A former general studies teacher at Bais Yaakov of Boro Park and general studies director of the Cheder Chabad in Philadelphia, Tarshish is a member of numerous WhatsApp groups for principals and school administrators, where she sees the endless posts concerning the teacher shortage. “STEM programs in New York and New Jersey help address this crisis and make a big difference for schools,” says Tarshish, who is also a certified school psychologist.

“The only way to get quality math and science teachers in the door is to offer significantly more money,” says Adrianne Mittan, executive director at the Hebrew Academy of Long Beach (HALB) on Long Island. “As a result of the STEM reimbursement, we feel confident that we can offer a competitive salary and benefit package to a new science/math teacher without increasing tuition or taking away much-needed funding from families who require financial assistance. If we were to rely on our budget alone, we would not have the ability to pay the salaries necessary to attract the top talent that is required.”

David Chalom, executive director of the Barkai Yeshivah in Brooklyn, agrees. “The funding we got [from STEM NY] was literally manna from heaven.”

In the second year of STEM NY reimbursements, which totaled $15 million, over $4 million went to Jewish schools. Some fifty-four Teach NYS member schools got funding in year two, with an average of nearly $60,000 each. “In this most recent, third round of funding alone, Jewish schools received over $10.5 million in reimbursements, which was for the 2019-20 school year,” says Katz.

Since 2017, Teach NY,  along with thousands of parents and students, has worked closely with bipartisan policymakers in Albany each year to advocate for more funding of the program to ensure that all students have access to highly qualified STEM teachers. So far, a total of $50 million has been reimbursed to nonpublic schools, with another $70 million committed over the next two years. Over this five-year period, a total of $120 million has been set aside for nonpublic schools throughout the state.

“The STEM program has ensured that we can continue to attract top educators without passing along the additional expense to our parents,” says Mittan.

The program also gives day schools the opportunity “to offer more electives and expand what we offer,” says Normand.

“To have the state partner with us this way is tremendous. Our goal is to have all of our STEM teachers through this program. We hope that eventually it will cover the salaries of all of our general studies teachers.”

1 1 vote
Article Rating
This article was featured in the Summer 2022 issue of Jewish Action.