How the only shomer Shabbat family in West Lafayette, Indiana, managed to raise religiously devout and committed children. 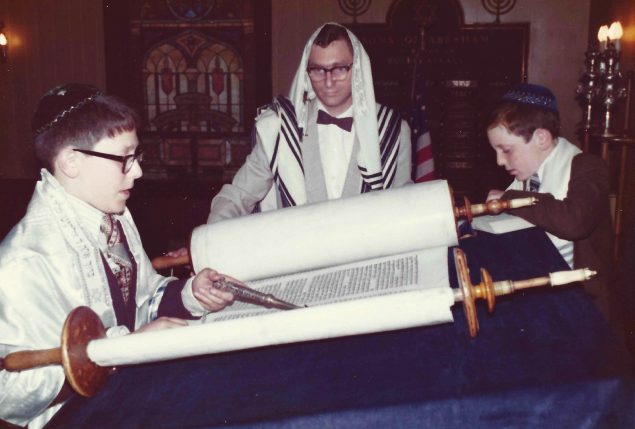 Thirteen-year-old Rashi practices reading from the Torah in preparation for his Bar Mitzvah, October 1974. From left: Rashi, his father, Edward Simon and his brother Hillel, age nine. Courtesy of Rabbi Rashi Simon

In 1988, Jewish Action published an article focusing on the four Simon children who were raised in a mid-western community where they were the only Orthodox kids for miles. Nearly thirty years later, we revisit with the Simons to discover the secret to raising kids Jewishly.

One day this winter Ronit Comrov will make dozens of latkes, and sufganiyot, “just raspberry,” for her friends in Milwaukee. In London, Rabbi Hillel Simon will host a Chanukah party for friends and Rabbi Rashi Simon, also in London, will sponsor one at the outreach organization he founded. In Bnei Brak, Shira Pollack will arrange her work schedule to get home at the earliest possible moment to light the menorah with her family.

Sounds like typical frum life in a big city.

But the four Simon siblings are products of small-town America. 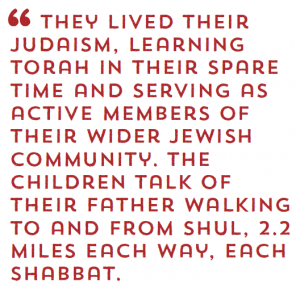 The family was the subject of an article entitled “Growing up Jewish in Indiana,” which appeared in Jewish Action’s winter 1988 issue. The series of first-person reflections described how Edward Simon, a professor of biology at Purdue University, his wife Cyrelle and their children maintained an Orthodox life in rural West Lafayette. The city’s Jewish population at the time: about 800 to 1,000. Its Orthodox population: the Simons, and the occasional rabbi.

The Simon children attended a public elementary school, where they brought kosher lunches every day and took off for the yamim tovim.

Was it hard to maintain a decent level of frumkeit in what was essentially a spiritual vacuum?

“It was hard—very hard,” said Mrs. Simon, who spoke with Jewish Action a few weeks before she passed away some months ago. Jewish education: an hour each week in Hebrew school. No strictly Orthodox synagogue—the family belonged to the city’s “traditional” congregation, which offered separate-seating and mixed-seating alternatives in the sanctuary. No eruv. Mrs. Simon stayed home on Shabbat. The closest mikvah, in Indianapolis, was an hour’s drive each way. Obviously, no kosher restaurants.

Today, more than a quarter-century later, all the Simons have left Indiana; Mrs. Simon, a”h, had moved to Jerusalem after her husband died a decade ago. But the four children have remained devoted, dedicated Orthodox Jews. The sons, both rabbis; the daughters, both married to rabbis; all four are involved in chinuch (Jewish education) and kiruv (outreach to less-observant Jews).

How did the Simon parents do it?

The Simon children say they frequently hear that question.

Their parents gave them distinctive Jewish names, a constant reminder of their identity.

They lived their Judaism, learning Torah in their spare time and serving as active members of their wider Jewish community. The children talk of their father walking to and from shul, 2.2 miles each way, each Shabbat. “Rain or shine,” says Rabbi Hillel. Or, in the case of northern Indiana, snow or frigid weather.

They drove to Chicago to pick up kosher meat— “a quarter of a cow,” Mrs. Simon said—and had some kosher supplies shipped from Indianapolis.

The 1988 Jewish Action article focusing on the four Simon children who were raised in a mid-western community where they were the only Orthodox kids for miles.

They made their home a center of Yiddishkeit. Large sedarim. Sukkah parties in the backyard. A community Lag b’Omer celebration. Lots of guests on Shabbat.

Then they sent their children away—to camp each summer, to day schools by the time each child reached high school.

“We all became more observant while progressing in Jewish education,” Rabbi Hillel says. “We probably all imagined going somewhere else [after growing up and getting married],” he says, “to be part of a frum atmosphere.”

He and his siblings talk about the advantages of growing up as lone Orthodox Jews. There’s more responsibility, there’s a constant obligation to explain one’s lifestyle to outsiders and there’s no opportunity, as in a large Jewish community, to “coast” and let someone else do the work. “I loved when people asked questions [about Jewish traditions and practice],” says Ronit.

Living in the tolerant atmosphere of a college town was an advantage—people from various ethnic and religious backgrounds lived and studied and taught there. Someone wearing a kippah, as Professor Simon did during most of his academic career, did not draw much attention.

The siblings’ love of Judaism, and desire to experience the type of intensely Jewish community they did not have as children, spurred their interest in working with less-observant Jews. “I feel I can relate to them at their level,” Shira says.

Chanukah this year will offer them another chance to share.

As in the past, Ronit’s husband, Rabbi Comrov, will travel one day during Chanukah this year to Oconomowoc, a small city forty-five minutes from Milwaukee, to lead a Chanukah celebration for a twenty-family congregation that lacks its own spiritual leader. He goes there every several weeks to give isolated Jews some chizuk and a shot of Yiddishkeit. “I encourage him,” Ronit says.

She accompanies her husband sometimes. “I feel very at home there,” she says. “Because that’s how I grew up.” 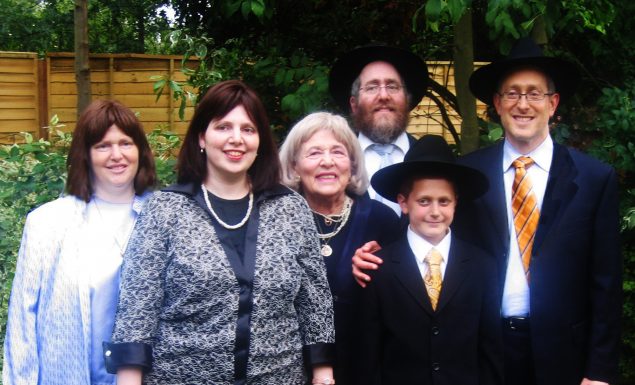 Steve Lipman is a staff writer at the Jewish Week in New York and a frequent contributor to Jewish Action.