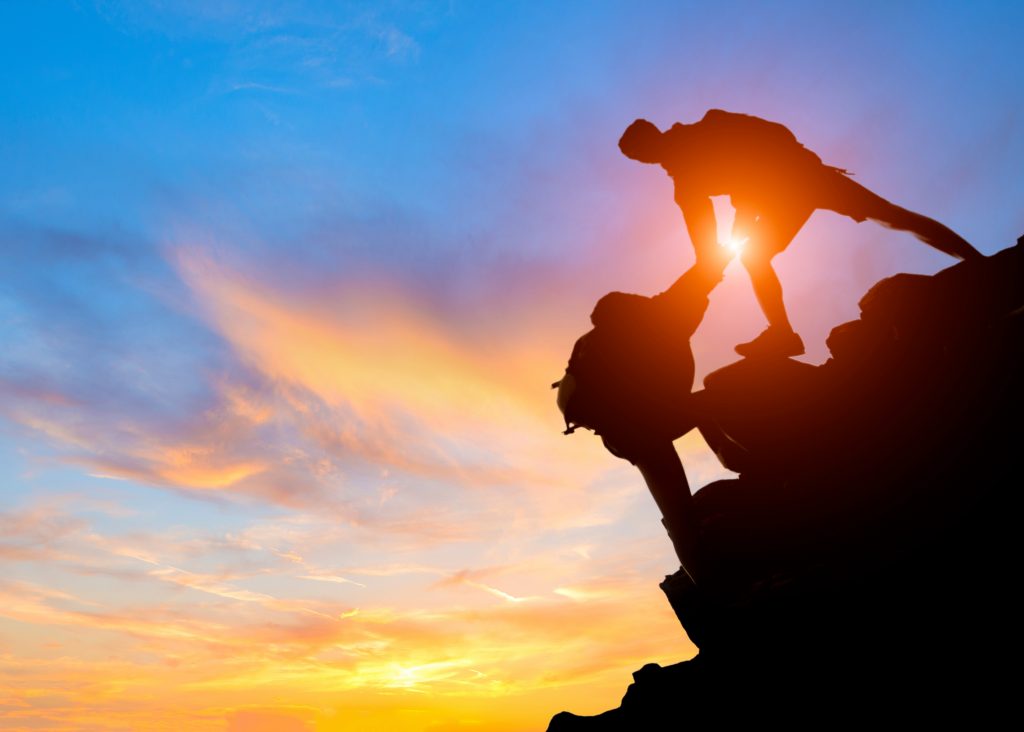 We are pleased to introduce a new column called “Everyday Kindness” where we highlight small and not-so-small acts of kindness that happen each and every single day.

Rav Avraham Yitzchak HaKohen Kook once said that just as the Temple was destroyed due to sinat chinam, baseless hatred, so too the Temple will be rebuilt through ahavat chinam, unconditional love. As we prepare to enter the Nine Days, we hope the stories of selfless acts of kindness below inspire more chesed and ahavat chinam in our community.

Mr. Namdar and his wife Maya were mourning the loss of their daughter, Liel, age fifteen, who had died in a traffic accident, victim of a drunk driver.

“There was a sign on the door: ‘Immediate family only,’’’ Mr. Kaplan says. “We decided to go in anyway, and if they throw us out, so be it.”

A family friend standing at the Namdars’ front door greeted the Kaplans, who explained their reason for coming, then brought the couple over to Mr. Namdar.

Joel Kaplan, who serves as executive director of Yeshiva Darchei Torah in Far Rockaway, and chazan emeritus of Congregation Beth Sholom in nearby Lawrence, introduced himself and his wife. “We lost our child in an accident also,” he told Liel’s father.

The Kaplans’ daughter, Elisheva, age eighteen, had died in a car crash in 2018 that also took the life of her fiancé (of barely a week, set to be married in a few months) Yisroel Levin, of Brooklyn. They too were victims of a drunk driver.

The Kaplans didn’t know the Namdars.

“After we spoke for a few minutes, Mr. Namdar asked us to speak with his wife, who was in another part of the room,” Mr. Kaplan says. “We didn’t speak much; I think our presence was a chizuk.”

The Kaplans shared with the Namdars stories of how they had coped with the unthinkable, how they had not surrendered to their grief or given up hope. “They gave us chizuk,” Mr. Namdar says. “We were very consoled.” Everyone who came to the Namdars’ shivah home offered welcome words of comfort, he says, but only people who had sat on a low bench for a week mourning for a child, like the Kaplans, really understood what the Namdars were experiencing and feeling.

“We know what they’re going through,” Mr. Kaplan says.

Mr. Kaplan’s shivah call at the home of a family whose child had died has become a sad, but accustomed practice for him. Accompanied sometimes by his wife, sometimes by Rabbi Shaya Levin, Yisroel Levin’s father, he has in the four years since Elisheva’s death visited more than a half-dozen families who have experienced a similar, unexpected tragedy. People, like the Namdars, whom he had never met.

A longtime resident of Queens’ Far Rockaway neighborhood, Mr. Kaplan shows up at the homes of strangers, representing no one but himself, no Jewish organization, but fulfilling one of the most difficult and most private forms of chesed, emulating G-d, who comforted Abraham after the death of Sarah.

Each time he learns about a child’s death through the news or the Far Rockaway grapevine. Each time he gets directions and drives unannounced to the shivah home.

Each time he relives his own raw emotions, crying with the new aveilim. He has gone to the homes of Chasidic and Litvish Jews, Modern Orthodox and Sephardim.

Each time, he says, the pain is the same.

Each time he is welcomed with hugs.

Mr. Kaplan, a native of Brooklyn, has no training in counseling or mental health—beyond a lifetime of making shivah calls to people whom he knows.

The Kaplans are not the only bereaved parents who make such shivah calls. “They do it well,” says veteran trauma expert Zahava Farbman, a resident of Woodmere, Long Island, who served as associate director of crisis intervention, trauma and bereavement for Chai Lifeline’s Project Chai. “I know the Kaplans. They have come a long way in their grief process.”

In the four years since Elisheva’s death he has visited more than a half-dozen families who have experienced a similar, unexpected tragedy.

The Kaplans, who have established the Simchas Elisheva Fund (rayze.it/simchaselisheva/) in Elisheva’s memory to ease brides’ financial burden, are a large family. “We have twelve children—one of them is in Shamayim,” Mr. Kaplan says. Yisroel Levin’s family has established its own organization, 10K Batay Yisroel (10KBatayYisroel.org), whose goal is to make 10,000 shidduchim.

What does Mr. Kaplan say to parents who, like him, have lost a child? It depends on the circumstances—the cause of a child’s death, the mood at the shivah house. He has no set script; words aren’t always needed, he says.

After witnessing the consoling effect of the Kaplans’ shivah call, might Mr. Namdar consider doing the same thing, if he finds out about other families who have lost a child under similar circumstances? Would he go to a stranger’s home?

“I had never thought about that,” he says. “G-d forbid that there would be a need for such an outreach,” he says, adding, “We learned by [the Kaplans’] example. They helped us. Maybe we can help someone else.”

The driving time from Przemyśl, a city with a rich Jewish past in the southeast corner of Poland, to Warsaw, 250 miles north, is four and a half hours. Dr. Beata Schulman, who had coordinated a weekend Shabbaton program in Przemyśl, was in a hurry one Tuesday morning in 2006 to drive back to Warsaw to return a friend’s car she had borrowed. But a notice she spotted on the side of a building when she stopped at a red light changed her plans.

Ernestyna Felner had died the day before.

Beata hardly knew Ernestyna. Finishing up preparations for the Shabbaton, which some 100 Jews from the region attended, she, and two other leaders of Polish Jewry, had visited Ernestyna on Friday afternoon in the nursing home where the senior citizen spent her final years.

Ernestyna was a Polish Jew; her Jewish name was Roza.

“She was in her nineties,” Beata says. “A widow. No children. A Holocaust survivor. She was clearly dying.” Beata had gone to the bedside of Ernestyna, who was in no condition to attend the Shabbaton, to make the nonagenarian feel part of the nearby Jewish activities. “We spent five minutes with her,” wishing her a gut Shabbos and a Happy New Year—5767 was a month old, Beata says.

Like many young Polish Jews, Beata had discovered her family’s Jewish background a decade earlier, at age twelve, only after Communism fell in 1989, anti-Semitism waned, and open expression of one’s Judaism was not punished. A graduate of Krakow’s prestigious Jagellonian University, Beata engaged in an intensive study of Judaism since finding out that her maternal grandmother was Jewish.

Ernestyna, who had not lived as an observant Jew, had expressed no preferences for her funeral, besides the dress in which she wished to be buried. In largely Catholic Poland, someone with no family members to take charge would be buried, by default, according to the Catholic rite.

Beata called Rabbi Michael Schudrich, the country’s Long Island-born chief rabbi, who had returned to his base in Warsaw following the Shabbaton.

“Can you stay there a couple days longer?” Rabbi Schudrich asked Beata. The rabbi wanted her to take charge of funeral arrangements.

The notice stated that Ernestyna would be buried in two days in a Catholic cemetery, in a Catholic ceremony. “It’s not right,” Beata told herself; a Jew deserved a Jewish burial.

“I had other things to do” back in Warsaw, says Beata, who after finishing college worked—and volunteered—at a series of jobs for the Jewish community. Instead, “I turned around and got my [hotel] room back.”

Her conscience, and her evolving Jewish identity, dictated that she agree to the rabbi’s request; she was starting to carry out the mitzvot she had studied. She remained in Przemyśl, coordinating the details for Ernestyna’s burial. Over the next three days, Beatea played a key role in ensuring that Ernestyna had a kosher burial. She arranged for the release of the woman’s body into the care of the Jewish community; she lined up a plot and a grave digger in the city’s Jewish cemetery; she called the people who would provide a gravestone; and worked with Rabbi Schudrich, who came back to Przemyśl with a casket and some women who would perform the taharah—the washing of Ernestyna’s body.

“It’s different to know about a thing [a mitzvah] academically, and to observe it,” says Beata, who had begun working to renovate Jewish cemeteries throughout Poland during high school, and educated herself about Judaism’s death and funeral rituals.

In Przemyśl she was prepared.

On short notice, in an area with a small—and not particularly Orthodox—Jewish community, Beata was not able to arrange for people to serve as shomrim, to stay near the body until burial and recite Psalms. And she was not able to arrange for a graveside minyan; she called her contacts in the region of Przemyśl, and in nearby Ukraine. “We were short two people” of the required ten.

Beata’s work fulfilled the definition of chesed shel emet (true kindness), since there was no expectation of the person for whom she was toiling, or the person’s relatives being able to thank her or repay her in any way.

She calls that week – the Shabbaton, her work of behalf of Ernestyna, and the subsequent Shabbat in Warsaw with an Orthodox family—the start of her maturity as a Torah-observant Jew. “I was just becoming religious,” she says.

That week in Przemyśl changed Beata’s spiritual path; keeping a full Shabbat at the Shabbaton, and handling the funeral details sealed her commitment to becoming a full-fledged ba’alat teshuvah. Today, Beata is a resident of Long Island and director of development at Yeshiva Har Torah in Little Neck, Long Island.

“Beata was amazing,” Rabbi Schudrich says. “If Beata didn’t do what she did, the woman would have been buried in a non-Jewish cemetery as a non-Jew. The problem is when a Jew dies alone [in Poland] and no one thinks to contact the Jewish community.”

Three days later than scheduled that week in 2006, Beata drove back to Warsaw—where, at Rabbi Schudrich’s urging, she served as a volunteer with the Chevra Kadisha committee, ensuring other Jews a proper kevurah. And, before she moved to the United States, she conducted tours of Jewish Poland for visitors from abroad, many of them Chasidim.

A few years after Ernestyna’s death, Beata led a group of Bobover Chasidim to Przemyśl. As is the custom of Chareidim, they went to the gravesites of many prominent rebbes—in the eighteenth century, Przemyśl’s Jewish community was one of Poland’s largest. When Beata told the Chasidim about Ernestyna, they went to her grave too, and recited the appropriate prayers for her soul.

“She finally had her minyan,” Beata says.

We are seeking true stories about acts of kindness to uplift and inspire. Send your brief (4-500 word) submission to ja@ou.org with the subject line: everyday kindness.