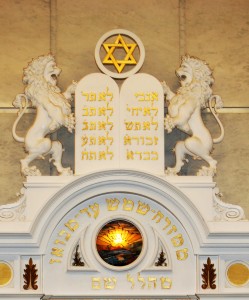 Rabbi Moshe Feinstein1 was once approached by someone who felt that the proper blessing to recite before eating chocolate should be “Borei peri ha’adamah” instead of the customary “Shehakol.” Rabbi Feinstein replied that for hundreds of years, the universal Jewish practice has been to recite the blessing of “Shehakol” prior to eating chocolate.2 Rather than assume that world Jewry has–for centuries–been reciting the incorrect blessing, it makes more sense to work on understanding why “Shehakol” is, in fact, the correct blessing to recite
on chocolate.3

I thought of this incident on a recent Sunday, as I carefully returned a tall wooden ladder to our shul’s janitorial room, and then brushed years’ worth of dust off of my shirt and tie. Although Kesher Israel Congregation (KI) in Harrisburg, Pennsylvania, is just a twenty-minute drive from the world-famous Hershey Company’s headquarters, the episode involving Rav Moshe and chocolate was on my mind for an entirely different reason.

While conversing a week earlier with a Pennsylvania official–who is a knowledgeable and devout Muslim–I learned that some of his coreligionists will not pray in a room containing a particular type of American flagpole. Surprised, I asked him why. He explained that many US flagpoles are topped with an American eagle–which some Muslims consider a graven image. As such, they feel it is religiously inappropriate for them to pray in a room with such a flagpole.

The conversation reminded me of Shemot 9:29. After suffering through the plague of barad (hail), Pharaoh pleads with Moshe to pray to God for the plague to cease. Moshe tells Pharaoh that he will indeed ask God to stop the hail–but will do so only after he leaves the city. Quoting the midrash, Rashi explains that since the city contained so many idols, it would have been inappropriate for Moshe to pray there.

The conversation with the devout Muslim got me thinking. The second of the Ten Commandments4 clearly forbids making graven images. In addition, idolatry is one of the three cardinal sins for which a Jew must forfeit his or her life rather than transgress. Thus, it is understandable why this sin has been taken extremely seriously by halachic authorities throughout the ages.

As such, why had I never heard about halachic objections to the eagles found atop many US flagpoles?5 Furthermore, one of the most common forms of synagogue art is that of two mighty lions–one on each side of a representation of the Luchot HaBrit, Tablets of the Covenant. Elaborately carved imagery of lions is found atop the aron kodesh (ark) in countless synagogues around the world.6 In light of the clear Biblical prohibition against creating graven images, how are we to understand this widespread Jewish practice? Such a popular custom could never have taken off–and endured–if it was clearly wrong.

The issue of ornamental lions adorning arks resonated strongly with me for another reason as well. KI has a beautiful hand-crafted ark which goes back to the days of its first rabbi–the famed Rabbi Eliezer Silver.7 When KI relocated to its current location in 1949, the congregation’s original ark was carefully transferred to the newly built sanctuary. KI had always been blessed with scholarly and outstanding rabbinic leadership.8 As such, I felt it was inconceivable that the synagogue’s beautiful ark could be in conflict with halachah. I was confident that if I did some research, I would surely discover how the lions adorning KI’s ark (and the arks of countless storied Jewish sanctuaries all over the world) were compatible with Jewish law and tradition.

Elaborately carved imagery of lions is found atop the aron kodesh in countless Ashkenazic synagogues around the world. In light of the clear Biblical prohibition against creating graven images, how are we to understand this widespread Jewish practice?

As I began my research, I quickly realized that the literature on whether images or sculptures of animals fall under the halachic definition of graven images is quite vast.9 In surveying the many varying opinions on the matter, Rabbi Yitzhak HaLevi Herzog (1888-1959) observed that generally speaking, the rabbinic authorities of the Sephardic world forbade the practice of decorating synagogues with animal imagery, while Ashkenazic authorities allowed it.10 This would explain why images of lions as synagogue art seem to be a uniquely Ashkenazic phenomenon.11 However, on what halachic basis had the great rabbinic leaders of Ashkenzic Jewry allowed this custom to flourish?

I found peace of mind in two responsa. Rabbi Moshe Feinstein directly discusses the American eagle commonly found atop US flagpoles12 and rules that this patriotic figurine presents no halachic problems. Firstly, he states, halachah is concerned with sculptures of animals that are one of the twelve signs of the zodiac. The eagle is not associated with the zodiac. Secondly, he says, the consensus is that fashioning or owning the likeness of animals poses no halachic concerns in a time or place where people do not worship animals. As this is clearly the case today, Rabbi Feinstein concludes that the sculpted eagle atop US flagpoles–as well as the lions commonly found in Ashkenazic synagogue art13–pose no halachic problems.

In addition, an important responsa by Rabbi Chaim Sofer14 addresses the Ashkenazic custom of decorating synagogue arks with sculpted lions. Rabbi Sofer prefaces his halachic opinion with a powerful statement:

. . . God forbid to say that this [practice of adorning synagogue arks with decorative lions] is included in the injunction of “You shall not make a carved image.”15 To suspect, God forbid, that earlier generations–who are likened to angels–may have transgressed the prohibition against idolatry, is to speak malicious falsehoods against the holy ones of our land . . .

Rabbi Sofer goes on to explain that the lions used to adorn synagogue arks are not free-standing sculptures, and hence are not halachically problematic. While the images appear to be life-like sculpted lions, they are not, in fact, three-dimensional free-standing sculptures. The backs of the lions (facing the wall) are smooth since they are flush against, or simply facing, the synagogue’s wall. A sculpture that is not carved on all sides is not considered a sculpture as far as halachah is concerned.16

Having seen these two responsa, I now understood why the eagles found atop many US flagpoles as well as the lions adorning arks in countless Ashkenazic synagogues had never posed halachic concerns. Nonetheless, that Shabbat, as I sat in shul alongside KI’s ark, I kept glancing upward, and my curiosity was piqued. The ornamental lions above KI’s ark are not flush against the synagogue’s wall. It would be possible for me to feel the backs of those lions to determine if they were sculpted on both sides or only partial sculptures. I was curious to see if KI’s lions would satisfy Rabbi Sofer’s criteria.

The next morning, after everyone had left the shul, I helped myself to our custodian’s tall wooden ladder. After gingerly placing it alongside the ark, I was soon standing about ten feet off the ground. I felt the backs of the ornamental lions–they were absolutely smooth (and very dusty). The lions, I can now testify, are sculpted on one side only.

Returning the heavy ladder, I smiled and thought of the incident regarding Rav Moshe and the proper blessing for chocolate. Rabbi Feinstein had taught his questioner an important lesson about not assuming generations of scholars and pious Jews had erred. My hands-on lesson with the lions reinforced this message for me. Before assuming that observant Jewish communities–and their learned leaders–have made mistakes, let’s do our utmost to try and understand how their practices posed no halachic problems in the first place.17

2. See Minchat Shlomo 1:91.2 where Rabbi Shlomo Zalman Auerbach (1910ñ1995) sought to make sense of the prevailing custom of reciting the blessing of “Shehakol” on chocolate. Rabbi Auerbach ends up making the case that depending on the proportion of cocoa to the other ingredients, the proper blessing on chocolate may very well be “Borei peri ha’etz.” Nonetheless, Jews around the world are accustomed to reciting the blessing of “Shehakol” before eating chocolate.

3. See note 1. Despite the halachic concept of “minhag ta’ut” (an incorrect custom), Rav Moshe obviously felt that when faced with a long-standing universal practice endorsed by the greatest of Torah scholars it makes more sense to try and understand the soundness of that practice, rather than assume that it was simply a mistake.

5. In one of his responsa, Rabbi Feinstein discusses whether or not it is appropriate for a synagogue to place national flags in its sanctuary (Iggerot Moshe, OC 1:46). However, in that responsum, he never raises any concerns over the American eagle commonly found atop US flagpoles.

6. In the course of writing this article, I came across several theories as to why the lion became so popular in synagogue art. 1. The Tribe of Judah was traditionally symbolized by a lion (based on Bereishit 49:9). As the Davidic dynasty stems from Judah, the lion was always associated with Jewish royalty and prestige–a fitting symbol with which to adorn the ark. 2. The lion symbolizes the trait of strength (Pirkei Avot 5:20)–a trait essential for living in accordance with the Torah. 3. Isaiah (29:1) referred to Jerusalem–the destination of our prayers–as Ariel, Hebrew for lion (note the lion on the flag of the modern-day city of Jerusalem). 4. A synagogue ark containing the Torah reminds us of the Biblical ark, which contained the Tablets of the Covenant. Perched upon the Biblical ark were two sculpted keruvim (cherubs), which Jews were halachically prohibited from replicating elsewhere (see the midrash quoted in the final Rashi to Shemot 20:20). As such, mighty lions were seen as worthy substitutes to be perched upon synagogue arks.

9. See the many commentaries and responsa revolving around Shulchan Aruch, Yoreh Deah 141:6.

10. Heichal Yitzchak, OC 11. Rabbi Herzog (as well as Rabbi Ovadia Yosef in Yechaveh Da’at, YD 3:62) also suggests a fascinating cultural theory which may have played a role in the different halachic viewpoints. For centuries, Sephardic Jewry had lived within Islamic society, where the prohibition of graven images was taken extremely seriously. Muslims, in fact, took this prohibition beyond what halachah demands. Nonetheless, Muslims were aware that their understanding of monotheism and the prohibition of graven images–especially in a house of worship–were rooted in Judaism. As such, in addition to forbidding the use of animal imagery as synagogue art on purely halachic grounds, perhaps the great Sephardic rabbis forbade that practice in fear of the terrible desecration of God’s name which would result from Muslims seeing animal imagery in a Jewish house of worship. However, no such concern existed in Ashkenazic lands where Christian society did not at all frown upon religious imagery. Therefore, when ruling on the propriety of decorating a synagogue with animal imagery, Ashkenazic rabbinic authorities were able to consider the halachah alone, which they concluded allowed for this practice. They did not need to worry about meta-halachic issues which may have concerned their Sephardic colleagues.

11. See Yechaveh Da’at, YD 3:62 for a survey of Sephardic opposition to this practice.

13. Rabbi Feinstein’s second point is important, since the lion does play a role in the zodiac.

17. I thank Rabbi Yitzchok Shapiro of Milwaukee, Wisconsin, the editorial staff of Jewish Action and my father, Mr. U. H. Males, for their important comments to an earlier version of this article.

Rabbi Akiva Males serves as rabbi of Harrisburg’s Kesher Israel Congregation, an OU-member synagogue. He and his wife, Layala, moved from Kew Garden Hills, New York, to Pennsylvania in 2007.

0 0 vote
Article Rating
This article was featured in the Fall 2015 issue of Jewish Action.