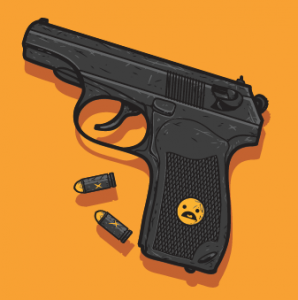 If you drive around different parts of the US long enough, you are likely to encounter two bumper stickers asserting two contradictory ideas. One states, “The only thing that stops a bad guy with a gun is a good guy with a gun.” The other states, “More guns, more death.” Those who support stricter gun control measures believe that gun control reduces violent crime by taking guns away from criminals. Those who are opposed to stricter gun control measures believe that gun control increases crime by disarming the “good guys” who deter criminals from committing violent crimes. Each side of the debate has statistics to support its side of the argument. There are studies that “prove” that areas with looser gun restrictions have less crime.1 There are also studies that “prove” that areas with greater availability of guns have a higher rate of violent crimes.2

As intellectually honest people, we strive to gather the facts before making decisions about controversial topics. Yet the conflicting studies in the area of gun control should not deter us. One possible resolution to this conflict is that there is no one-size-fits-all approach to the way people behave with guns. Sometimes guns will be used to commit violent crimes and sometimes they will be used to protect people. How then, does one come to a decision? In Talmudic times, the rabbis struggled with similar issues. Perhaps we can glean some lessons about gun control from the Talmud and its commentaries.

WEAPONS IN THE TALMUD
The Gemara (Avodah Zarah 15b-16a) has a lengthy discussion about laws relating to selling weapons and their accessories. The discussion involves a number of points. 1) The Gemara quotes a beraita that one may not sell weapons or their accessories (holsters, et cetera) to a non-Jew or a kuti. (A kuti, for these purposes, represents anyone who we suspect may sell the weapons to non-Jews.) One may not sharpen non-Jews’ weapons nor sell them handcuffs or similar tools. The Gemara explains that the reason for the prohibition is because non-Jews are prone to use these weapons or tools for murder, an observation that was true at the time. 2) The Gemara further states that just as it is prohibited to sell weapons to a non-Jew, it is also prohibited to sell them to a Jewish bandit. The Gemara adds that this certainly applies to a bandit who might murder, but it also applies to a mashmuta (Jewish bandit who has no history of violence). 3) The Gemara then quotes a dispute about whether one may sell shields to non-Jews. The dispute centers around one question: will the shields be used as weapons to attack others or for self-defense? 4) The Gemara further states that one may not sell iron to non-Jews because they might use it to make weapons. The Gemara notes that while one can convert any tool into a weapon, this rule relates to a type of iron primarily used for weaponry. 5) The Gemara goes on to justify selling iron to the Persians because they protected the Jews at the time. The Gemara seems to be permitting the sale of a specific type of iron. Yet many Rishonim extend the prohibition to ban the selling of all types of weaponry to non-Jews.

What is the nature of the prohibition against selling weapons? Is it based on public policy considerations (i.e., the safety of the public) or is it based on pre-established halachic principles? This seems to be the subject of a dispute among the Rishonim. Rabbi Yosef ibn Chabib, Nimukei Yosef (Avodah Zarah 16a), writes that the prohibition is based on a concern that it will lead to murder. Ritva (Avodah Zarah 16a) writes explicitly that it is based on the concept of lifnei iver, the prohibition against enabling someone else to commit a transgression. By providing weapons to someone who might use them for crime, one is enabling the purchaser to violate a transgression. Rambam codifies these laws in Hilchot Avodat Kochavim as well as in Hilchot Rotzei’ach. In Hilchot Avodat Kochavim, Rambam emphasizes that we don’t provide people with tools that can harm society, while he downplays lifnei iver. In Hilchot Rotzei’ach, Rambam connects these laws with the concept of lifnei iver. Thus, for Rambam both the societal concerns and the issur of lifnei iver play a role in the prohibition against selling weapons.

GUNS FOR PROTECTION
The most significant practical difference between these approaches emerges in explaining why the Gemara permits selling weapons to the Persians. According to Nimukei Yosef (op. cit.), selling weapons to those who protect us will certainly (vaday) provide an added measure of security, while the concern that they might use the weapons for murder is only speculative (safek). Rabbeinu Nissim (Avodah Zarah 5a) follows a similar approach and writes that one must analyze whether selling the weapons will prove to be more protective or more harmful. In Talmudic times, selling weapons to the Persians provided greater security overall.

Applying Nimukei Yosef’s analysis to modern times would require knowledge of whether less restrictive gun control laws are inherently protective or not. As we noted earlier, there is no clear consensus on whether this is true or not. Do gun control laws contribute to public safety (pikuach nefesh d’rabim) or detract from it? Ritva (op. cit.) writes that the Gemara permits selling weapons to the Persians because there is no lifnei iver in this situation. Perhaps what he means is that lifnei iver only applies when one knows that the weapon is going to be used for harm. If one sells to people who are trying to protect themselves or who serve to protect, one can assume that the weapon will be used for good, similar to the permissibility of selling ordinary tools to someone. We are not concerned that they may be converted into a weapon. Advocates for looser gun control restrictions might use this comment to support their argument and claim that lifnei iver doesn’t apply because normally guns are sold for protective or neutral purposes.

Opponents might counter that argument and claim that this is only true if we properly evaluate the purchase and perform a proper background check on the purchaser. Rambam, both in Hilchot Avodat Kochavim and in Hilchot Rotzeiach, seems to limit the permissibility of selling weapons to (Persian) military and law enforcement personnel. Rambam seems to not permit selling weapons to civilians even if their stated goal is to protect themselves or to provide protection to society. (Sidebar: Should I Carry A Gun?)

BACKGROUND CHECKS IN HALACHAH
Some advocates for stricter gun control laws are asking for enhanced criminal background checks as well as psychological evaluations of those purchasing weapons. Interestingly, support for this can be found in a Talmudic discussion. As noted earlier, the Talmud prohibits selling a weapon to a mashmuta—a Jewish bandit who has no history of violence but may use the weapon to escape capture. Rashi (Avodah Zarah 15b, s.v. L’Olam) notes that even if one is certain that the bandit won’t use the weapon to kill someone, he may use it to threaten someone and commit a crime (steal, et cetera). Thus, selling weapons to a bandit could make one guilty as an accessory to a crime. Rabbeinu Nissim (Avodah Zarah 5a), however, has a different explanation. He suggests that even if the bandit does not have a violent past, he will eventually be in a situation where he will use the weapon to avoid being captured. According to Rabbeinu Nissim, we are not only prohibited from selling weapons to people who are actually prone to commit murder, we may not sell weapons to those who have a greater than average propensity to use the weapon in a destructive manner. As such, perhaps one should not sell a weapon to someone who has a criminal past or a psychological proclivity towards violence.4

The entire Talmudic discussion takes place against the backdrop of a barbaric society. In Talmudic times, Jews lived in a society where Jewish blood was routinely spilled in vain and there was good reason to suspect that any non-Jew might commit an act of violence against a Jew. There are a number of other laws in the Talmud that are based the same premise. Rabbi Yair Bachrach (Chavot Yair no. 66) and Rabbi Avraham Danzig (Chayei Adam 12:42) write that nowadays, we live in civilized societies and we don’t have to suspect that any non-Jew will attempt to murder us.5

Does this mean that in today’s times, we can ignore the entire Talmudic discussion? If we apply Rabbeinu Nissim’s argument here, we can suggest that even though we need not be suspicious of the average citizen, we have the right to suspect that there are people in the general population who should not own guns and as such, we can take protective measures to ensure that guns don’t come into their hands. 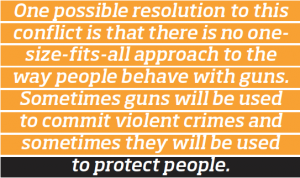 At the same time, Jewish law does value the importance of providing weapons to those who serve to protect us and by extension, those who are interested in protecting themselves, whether it was the Persians of Talmudic times or the security officers of today’s times, despite the possibility that those very weapons may be used to harm us. Jewish law recognizes that weapons control is complex and that a key determinant in whether to provide weapons to someone is whether doing so is more protective than it is dangerous. In Jewish law, knowledge is our friend and the more we know about the effects of gun control laws on public safety and about the specific individuals who are interested in purchasing guns, the better equipped we are to address this complexity.

3. The Gemara (Avodah Zarah 6b) states that the Biblical prohibition of lifnei iver is only violated if one provides the prohibited item and the recipient has no other reasonable means of attaining the item. If he has other means of attaining the item, there is no Biblical violation of lifnei iver. Rabbi Moshe Sternbuch (Da’at U’Machshavah 9:8) notes that this rule may not apply in the case of selling weapons. Even if the rabbis based the prohibition against selling weapons on lifnei iver, the parameters of the rule may not follow the same exact parameters as lifnei iver.

4. Even according to Rabbeinu Nissim’s interpretation, the prohibition only applies to selling to a known bandit. Requiring a criminal background check would mean checking every individual to make sure that a gun isn’t sold to the few people who are criminals. Nevertheless, when the likelihood of violating a prohibition is small but significant (miut hamatzui), Jewish law generally requires one to investigate the matter if the facts can be determined with relative ease (see Tosafot, Avodah Zarah 40b, s.v. Kol based on the Gemara, Yevamot 121a, Shulchan Aruch, Yoreh De’ah 1:1 and Beiur HaGra ad loc.). When the matter can potentially lead to a life-threatening situation, the threshold for statistically significant risk is even lower. Given that performing criminal background checks can be done with relative ease, one should screen all customers to ensure that they aren’t established criminals.

5. The comments of Rabbi Bachrach and Rabbi Danzig were not said with regard to the prohibition against selling weapons to non-Jews.

6. It is also noteworthy that the debate about gun control in the US focuses on possession rather than sale. If an individual purchases a gun illegally or produces it on his own, he is still in violation of the law. While the Talmudic discussion addresses the provider and not the purchaser, the values that can be extrapolated from the discussion provide guidance as to who should own a gun.

Rabbi Joshua Flug is the director of Torah research for Yeshiva University’s Center for the Jewish Future. He also serves as director of divorce proceedings for the Beth Din of Florida. Rabbi Flug previously served as the rosh kollel of the Boca Raton Community Kollel.

5 3 votes
Article Rating
This article was featured in the Summer 2016 issue of Jewish Action.