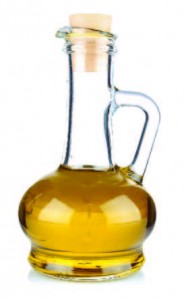 Nobody really knows what the Maccabees ate during that first Chanukah, but one thing is certain—it wasn’t potato latkes. Though the custom of eating oily foods to evoke the miracle of the oil dates back millennia—in a ninth-century letter, Maimon, the Rambam’s father, exhorted his community to take this practice seriously—it would take several more centuries for the latke to emerge as the oily food of choice. The fabled Chanukah fritter celebrated in story and song (the classic Yiddish Chanukah Song “Chanukah, oh Chanukah, a yontif, a sheina” describes the joys of eating latkes) is a relative latecomer to the Jewish table, dating only to the nineteenth century.

Potatoes were unknown in Europe until 1537, when Spanish forces of conquistador Gonzalo Jimenez de Quesada landed in what is now Colombia to search for gold. Instead, they found potatoes. Although the Incans prized potatoes as a delicacy, the first potatoes to be planted in Europe were watery and bitter, and most people didn’t want to eat them.

It was Antoine-Augustin Parmentier, a French scientist who was interred in a Bavarian prison camp, who eventually popularized the potato throughout Europe. Upon his release, Parmentier became a one-man public relations agency for the vegetable that kept him alive for the duration of his imprisonment. Because of his efforts, potatoes eventually caught on in France and later in Eastern Europe, which brings us back to latkes.

In the late eighteenth century, Eastern Europe was plagued by repeated crop failures. To stave off massive starvation, the Russian Empress Catherine the Great ordered farmers to plant potatoes instead of grain because potatoes grow more quickly and can survive a variety of weather conditions.

Czar Nicholas I enforced the decree with greater vigor and by 1850, the potato was entrenched in Eastern Europe.

The Jews, who were, for the most part, poor and hungry, were enthralled by the new vegetable. In the shtetl, potato was on the menu two or three times a day—a diet commemorated in the Yiddish children’s ditty “Sunday, potatoes; Monday, potatoes; Tuesday, potatoes . . .  Shabbos, potato kugel.”

For the Jews of Eastern Europe, the potato was, quite literally, a godsend. Nurtured by the potato, which is not only rich in starch but contains every other essential vitamin and mineral except calcium, vitamin A and vitamin D, the Jewish population exploded in Eastern Europe.

In 1825 there were 1.6 million Jews in the area that is now Russia and Poland. By the end of the nineteenth century, there were over five million. Naturally, Jews became masters of potato cookery, developing a variety of potato-based dishes including the much beloved Chanukah fritter, or the latke, whose name in Yiddish means “little oily.”

According to food historian Gil Marks, the first latkes, called kartoffelpfannkuchen, were fashioned from coarse potatoes fried in schmaltz (chicken fat). Eventually the name was changed to kartoffel latke and finally to just plain latke. The popular latke recipe we are all familiar with today—grated potatoes bound together with onions, eggs and matzo meal—emerged.

By the end of the nineteenth century, immigrants brought the recipe to the United States. One of the earliest American Jewish cookbooks, Aunt Babette’s Cookbook: Foreign and Domestic Recipes for the Household, published in Cincinnati in 1889, includes a latke recipe, as does the 1903 Settlement Cook Book. By the 1930s, food scientists were figuring out ways to streamline latke preparation, and Aunt Jemima, the pancake mix brand, even marketed a latke mix. In our own times, foodies have played with the original recipe to create gourmet variations using ingredients like broccoli, basil, feta cheese and sun-dried tomatoes. Though some of these newfangled latkes are quite delicious, nothing beats old-fashioned potato latkes sizzling in the frying pan as the candles burn on Chanukah night. 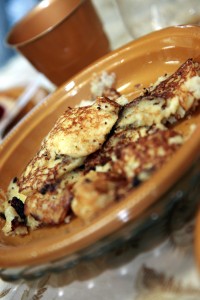 Heat oil in heavy-bottomed skillet. Make sure entire skillet is covered with oil ¼ inch or more deep. Drop in a tiny bit of batter. If it browns, you’re ready to fry. Spoon in latkes. Don’t crowd.

Fry three minutes on each side. Remove, place on paper towel to drain excess oil and serve immediately.

You can reheat in the oven on low and serve later, but nothing tastes as good as fresh latkes.

Carol Green Ungar is a full-time mother and freelance writer living in Israel. Her work has appeared in the Jewish Week in New York, Tablet, the Jerusalem Post and other publications.

Listen to an interview with Carol Ungar at http://www.ou.org/life/food/whats-deal-latkes/.

4 1 vote
Article Rating
This article was featured in the Winter 2013 issue of Jewish Action.