There is an Israeli folk tale about how the sufganiya, the ubiquitous Chanukah doughnut, got its name. After Adam and Eve were expelled from the Garden of Eden, they were despondent. God Himself cheered them up by feeding them sufganiyot.

This rather whimsical exegesis is based on a parsing of sufganiya as sof-gan-yud-hey (the end of the Garden of the Lord, aka the Garden of Eden), the last two letters spelling out the Divine name. While no known commentator supports this interpretation, the story indicates the high esteem in which the hole-less Chanukah doughnut is held.

In the US, latkes still reign supreme, but in the Jewish State sufganiyot are the quintessential Chanukah food. Though there are no accurate statistics, a recent survey conducted by Teleseker revealed that 80 percent of Israelis consume at least one doughnut during the eight-day holiday1. That’s more than the number who fast on Yom Kippur2.

How did this situation come to be? In some ways, the sufganiya is emblematic of modern Israel. It’s an amalgam of West European and Middle Eastern influences leavened by mesorah, the classical Jewish tradition.

Of course the rationale behind eating sufganiyot on Chanukah is the same as for latkes: oily foods recall the miracle of the oil, the lone, ritually pure flask the Maccabees discovered when they entered the defiled Temple. That oil, which should have burned out after one day, kept the menorah lit for eight, enough time for a new supply to be pressed.

Like much of modern Hebrew, the word sufganiya is a Zionist neologism, but the word’s roots go far back. Sfog, the root word of sufganiya, means “sponge” in ancient as well as in contemporary Hebrew. Though in the doughnut’s context, the sponging up refers not to cleaning but to the process by which the oil is soaked into the dough.

Though latter-day foodies scorn the technique, deep frying was a common practice in premodern times when most home cooks made do without ovens.

In Glaze of Sufagniyot
The earliest reference to fried pastry eaten on Chanukah is found in the writings of Rabbi Maimon ben Yosef, the father of the Rambam who lived during the twelfth century. Apparently even in his day there were those who scorned the traditional Chanukah treat. “One must not make light of the custom of eating sofganim [fried fritters] on Chanukah. It is a custom of the Kadmonim [the ancient ones],” he wrote.

The fritters he referred to were most likely a sweet, syrup-coated pancake known in Arabic as svingous, in Ladino as bimuelos and in Persia, Iraq and other Middle Eastern countries as zalabia. In a way, this dish can be seen as a precursor to the contemporary sufganiya.

But the plump, jelly-filled doughnut that we know today is a Western innovation. Food historian Gil Marks dates the first modern sufganiya to 1485, when a recipe for gefullte krapfen appeared in Kuckenmeisterei (Mastery in the kitchen), possibly the first published cookbook, printed on Johannes Gutenberg’s original printing press.

That doughnut was made from two rounds of lard-fried dough glued together with jam and was a popular Xmas treat. Jews substituted goose fat and served their version on Chanukah. Eventually the doughnut traveled eastward to Poland where it was renamed ponchiks or ponchkes. Though we commonly associate latkes with Polish Jewry, Marks says that in some Polish towns ponchiks were the preferred Chanukah treat.

Nobody knows who brought the sufganiya to Israel. In his book Eat and Be Satisfied: A Social History of Jewish Food, historian John Cooper surmises that the doughnut recipe came with the wave of German Jews who arrived in Israel after fleeing Hitler’s Germany.

“The Germans built the konditori culture here,” says Buki Ne’eman, the CEO of the venerable Ne’eman Bakery chain. “Before them, there was nothing.” Ne’eman says that his grandfather, Rabbi Yaacov Ne’eman, who himself was of Persian roots, learned how to make sufganiyot when he worked at a German-Jewish-owned bakery in Jerusalem’s Meah She’arim.

Marks suggests that the sufganiya may predate the Fifth Aliyah (1929-1939). During the late 1920s, the Histadrut Labor Federation purposely championed the doughnut in place of the latke in order to create jobs for its members. While anyone with a grater and frying pan could easily make latkes at home, sufganiyot required manpower to prepare, transport and sell the doughnuts.

In earlier years, sufganiya baking was very labor intensive. Ne’eman says that the early sufganiyot were kneaded, rolled and cut by hand and then fried in small batches on a kerosene heater known as a primus.

The More Doughnuts, the Batter
Today’s sufganiyot are assembly-line products, and there’s even a machine to squirt the fillings inside. Sufganiyot have become big business. It is rumored that last Chanukah, Angel’s, Israel’s largest bakery chain, produced 25,000 sufganiyot a day during the holiday, though a company spokesperson declined to confirm this number. With prices ranging from a dollar for the simplest jam-filled doughnuts up to almost four dollars for gourmet sufganiyot, the profits add up.

Sufganiya season has also gotten longer. Whereas a decade ago you couldn’t find a sufganiya until a week before Chanukah, they are now available as soon as the Sukkah boards are put away. And while sufganiyot used to come in one flavor only—strawberry jam—bakeries now offer a dozen or more choices including cappuccino, Bavarian cream, cheesecake flavored, Bamba flavored and even a “chaser” line of alcohol-infused doughnuts with vodka shots inside the filling. As Israelis have become more health conscious, sufganiyot have gotten smaller. A decade ago the average sufganiya weighed in at 3.5 ounces. Today, however, many bakeries offer “minis” at half that size, some offering tiny bite-sized doughnuts as well.

Nevertheless, most consumers still favor the standard-sized doughnuts in the classic flavors— strawberry and caramel (ribat chalav)—which were introduced by Argentinian Jewish immigrants during the 1980s.

These days you no longer need to book a plane ticket to Israel to sample a fresh sufganiya. Many kosher bakeries in heavily Jewish areas throughout the States make sufganiyot, and the Internet is filled with do-it-yourself sufganiya recipes.

Whichever doughnut you choose, remember that the sufganiya is a lot like life itself: it’s cyclical, sometimes up and sometimes down; its real sweetness is hidden deep inside, and it needs to be savored in the moment. Enjoy your sufganiya while it’s fresh. Happy Chanukah and b’tayavon.

Carol Ungar is a  freelance writer living in Israel. Her work has appeared in the New York Jewish Week, Tablet, the Jerusalem Post and other publications. 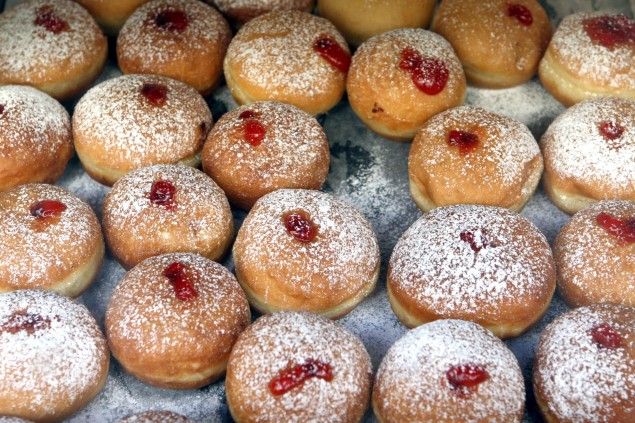 1. Stir together the warm water, yeast, and the pinch of sugar in a large bowl. Allow the mixture to stand for a couple of minutes to allow the yeast to swell. Stir in the remaining sugar, the milk [or water], vanilla, eggs, oil or shortening, salt and as much of the flour as needed to create a soft dough. Knead the dough by hand or use the dough hook on a standing mixer, adding more flour as needed to form a firm dough that is smooth and elastic.

2. Place the dough in a greased bowl and cover the bowl tightly with plastic wrap. Let the dough rise for about 1 hour. (If not using right away, you can refrigerate the dough at this point.)

3. Gently deflate the dough. (If the dough is coming out of the fridge, allow it to warm up at room temperature for about 40 minutes before punching and proceeding.)

4. Pinch off golf ball-size pieces of dough and form them into small balls. Cover the sufganiyot with a clean tea towel and let them sit at room temperature for 20 to 30 minutes.

5. When you’re ready to fry, heat about 4 inches of oil in a deep fryer or a heavy Dutch oven to about 385°F (196°C). Line a baking sheet with a couple layers of paper towels.

6. Gently press the sufganiyot to flatten them ever so slightly. To test the temperature of the oil, it’s a good idea to start out frying a single doughnut. When the doughnut appears golden brown on both sides, take it out and cut it open to see if the inside is cooked through. You want to attain and maintain an oil temperature that’s hot enough so it bubbles but not so hot that the doughnut browns before the center is cooked. It may take a few tries to find the right temperature and timing. When you’re satisfied that the oil is at a good temperature, carefully add the sufganiyot, 3 or 4 at a time, to the hot oil and fry until the undersides are deep brown. Turn over once and finish frying the other side. The total frying time will be somewhere between 1 1/2 and 3 minutes. Lift the sufganiyot out with a slotted spoon and drain them well on paper towels.

7. If desired, place some granulated or confectioners’ sugar in a paper bag, add a couple sufganiyot, and gently shake to coat. Use the tip of a spoon to make a small indentation in the top of each sufganiya and spoon in a little jam or jelly.

This is a Marcy Goldman recipe. Marcy Goldman is a master baker/cookbook author (A Treasury of Jewish Holiday Baking: The 10th Anniversary Edition, Whitecap Books) and the host of the popular web site www.betterbaking.com.