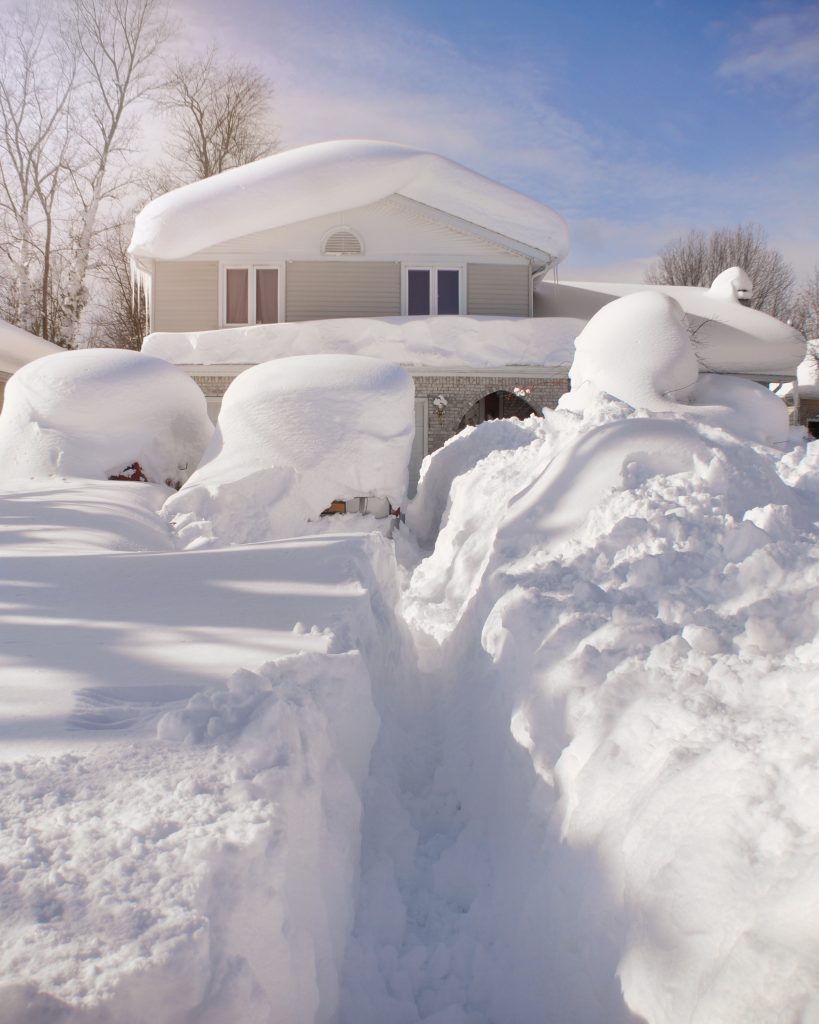 Living in New York City in 2006, I knew that the last major Jewish holiday I would spend with my mother in my Buffalo hometown was going to be bittersweet. Dad had died the previous year, a few days after Thanksgiving; Mom was planning to move soon to Houston to live near my married sister. I wanted to make my extended time in our family home over Sukkot and Shemini Atzeret/Simchat Torah memorable.

I didn’t realize how memorable Nature would make the chagim.

October 2006 was the year of Buffalo’s “October Surprise.”

The weather bureau had forecast a mild snowfall—mild by Buffalo standards—of a few inches on October 12, a Thursday. (Snow in October is no surprise to a Buffalo native.) Instead, twenty inches fell. Fellow Buffalonians, familiar with the city’s famed Lake Effect accumulations, weren’t expecting the deluge, weren’t prepared for the heavy, wet snow that collapsed power lines and cast Western New York into darkness.

Driving home Thursday night from a Chol Hamoed Sukkot meal with a young rabbinic family (their backyard sukkah had collapsed; we ate our seudah indoors), we carefully turned down our side street: no streetlights, no lights in the front windows of any home. “This does not look good,” I observed presciently. Our driveway was already covered with more than a foot of the white stuff; inside, we learned, the basement had started to flood. We got out our flashlights.

And there was no heat.

Friday was erev Shemini Atzeret. Usually, I would kasher Mom’s electric oven, set the living room table and help Mom prepare for the holiday. Without electricity, there would be no kashering of the oven, and no kosher chicken or potato kugel baked in it. The only illumination at the table would be from Mom’s pair of highly polished, antique candlesticks.

I didn’t realize how memorable Nature would make the chagim.

“We’re going to make yom tov. We are going to enjoy it,” declared Mom, who had grown up in Buffalo, in an Orthodox family of immigrants from Poland (now Belarus) and had coped with decades of debilitating storms.

How do you heat a meal without a working oven or stove?

Mom had a boxful of Shabbat candles. I got out a sharp knife and cut a bunch of them into two-inch lengths, carving around the wicks. I placed them in the bottom of a shallow, kosher broiling pan, lit them, and affixed the grill over them. On went the chicken pieces and kugel and other stuff we wanted heated. After twenty-five minutes everything was piping hot, thoroughly baked.

How do you keep the grape juice cold without a working refrigerator?

You leave it outside. The bottles of Kedem were properly chilled, thanks to Buffalo’s winter.

In our bedrooms, we slept bundled up under layers of blankets, I in my jogging outfit, Mom in her treasured flannel pajamas.

I davened at home.

After the weekend, we longed for warmer lodgings. We walked carefully on the snow-clogged, icy sidewalks and streets to an elementary school a few blocks away; the Red Cross had set up an emergency shelter in the gym. At night, we slept on cots; during the day, we commiserated with our fellow-displaced neighbors. Mom, who had served in the Navy during WWII, was a trooper; she didn’t complain.

For a break, we walked to the large Top’s supermarket around the corner. It had a generator. It had heat.

Mom had an idea. “Today’s Simchas Tairah,” she told me, pronouncing the holiday’s name as her émigré parents must have. “You have to celebrate it.”

How do you celebrate Simchat Torah in a supermarket, where you are probably the only Jews?

“Go get an apple, put it on a stick, and march down the aisles,” she suggested. She remembered marking that yom tov as a kid in shul in the traditional way, the stick attached to a paper flag that bore some Jewish images.

Eventually, the power came back to our home, Mom moved back in, and I—knowing she was safe—went back to New York City. Where future yom tov meals were made, as usual, in functioning stoves and no one thought of dancing in the aisles of supermarkets.

By the next year, Mom was, as I had foreseen, making Pesach with her daughter in Texas, and I was leading a Seder in Romania.

In subsequent years I spent the Sukkot period with friends in Greater New York. The celebrations were lebedik, conducted properly according to Jewish tradition. But none were as memorable as the surprise on the shore of Lake Erie. Mom’s warm attitude had brought the simchah to Simchat Torah.