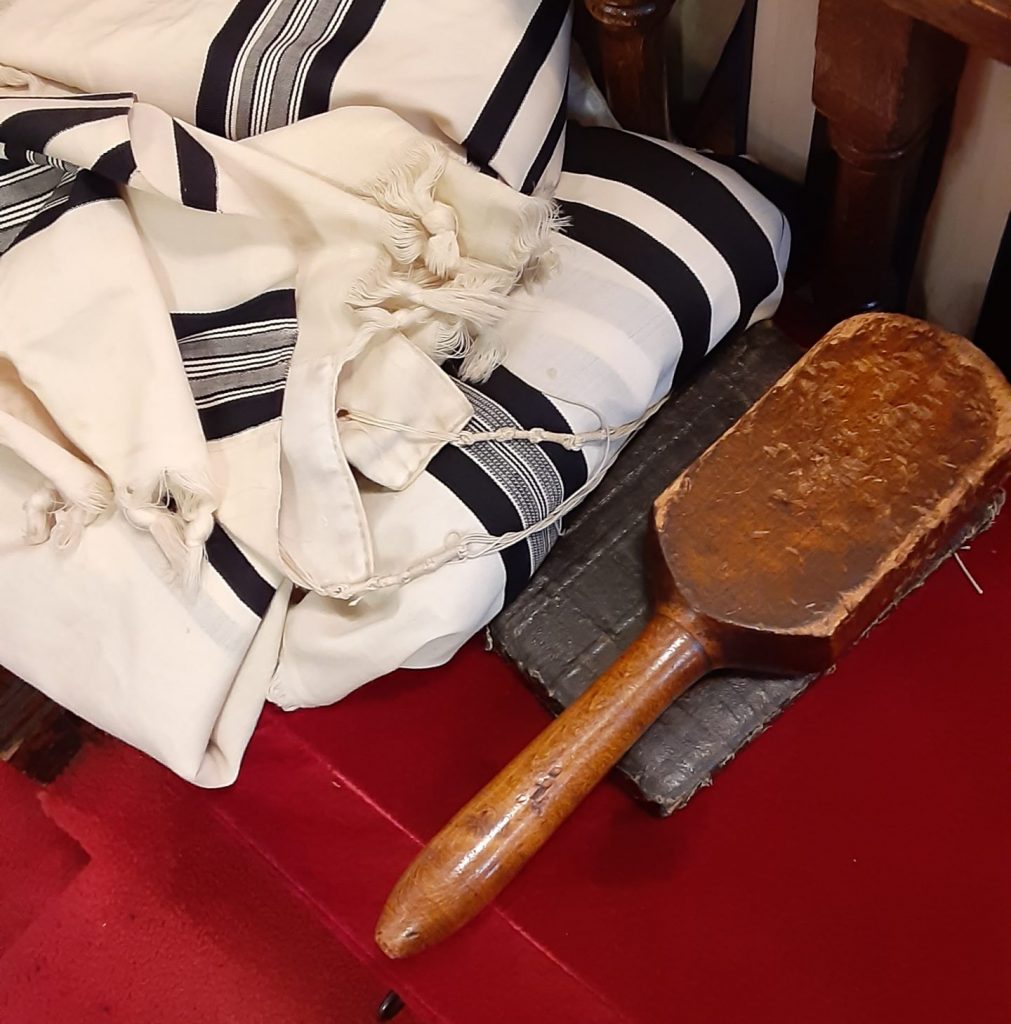 The historic Bialystoker Synagogue on New York’s Lower East Side has a special gabbai’s “klapper,” still in use today. Photo courtesy of Rabbi Zvi Romm

The gabbai’s hand hovers over the bimah. Like a golfer practicing his swing, he raises and lowers it a few times. As the chazan finishes Kaddish, the gabbai lifts his hand on high, and slams it down with a resounding THUD!

For those steeped in the spoken and unspoken language of the shul, an entire siman (chapter) of the Shulchan Aruch could be contained in that klap (Yiddish for clap or bang), as it is universally known.

The purpose of the gabbai’s klap is to alert and remind all those present to say the special additions in the Amidah that are designated to be said on rosh chodesh and various yom tov and other special days.

Like many things in Jewish tradition, the list of situations when a klap is called for is somewhat fluid. Certainly some, like the klap for Ya’aleh Veyavo on rosh chodesh, are a given. And rosh chodesh is also the occasion for another essential klap during the morning davening. Since it’s a semi-yom tov, tefillin are removed before saying Musaf. When the gabbai judges that most people have finished packing them away, he gives a resounding klap so that everyone should begin the Musaf Amidah together.

You’ll also always hear a klap right before Musaf on Shemini Atzeret, the first time “mashiv haru’ach” will be said that year. In this case, not only does the gabbai klap, he must also shout out the words “mashiv haru’ach umorid hageshem” as he does so (Shulchan Aruch, OC 114:2). On the other hand, there’s no parallel klap (at least in the Ashkenazic tradition) before Musaf on the first day of Pesach when we stop saying “mashiv haru’ach,” because it’s a little difficult to convey “say nothing!” in a klap.

In all probability, the klap developed because talking is forbidden during most of davening, and certainly between the reading of Shema and the start of the Amidah. However, it is permissible when it is necessary, for example, to clarify something in the order of the service itself. So, as in the case of “mashiv haru’ach,” in some shuls the gabbai always calls out what the klap is meant to refer to. Certainly, if you didn’t develop an ear for the meaning of each klap as you grew up, these coded messages can be hard to decipher without the announcement.

Some gabba’im fail to grasp the rules of the game and klap at every possible opportunity, even when it is superfluous. For them, rule number one seems to be: when in doubt, klap! For example, on chol hamo’ed mornings, the chazan concludes the Kaddish before Musaf in the yom tov mode, clearly signaling to everyone that the special Musaf Amidah should be said, thus rendering a klap unnecessary. Yet some gabba’im insist on klapping at this point.

The gabbai’s klap is a tool, nurtured by tradition and minhag, that when used judiciously can help ensure that everything goes right.

There is also the question of whether the gabbai should klap once or twice. Many gabba’im automatically klap twice every time in the apparent belief that they need the extra emphasis to get everyone’s attention. But the classic tradition is that the gabbai klaps just once when there is only one change to be made, such as for the addition of Al Hanissim on Chanukah and Purim, and twice when there are two, for example when one of the days of Chanukah is rosh chodesh and we also need to add Ya’aleh Veyavo. (At Minchah on the fast day of Tishah B’Av there could be three, to include Nachem Aneinu, and the change from “shalom rav” to “sim shalom.”)

It becomes really annoying when individual congregants take it upon themselves to klap. Sometimes it unfortunately even becomes a game, with several men competing for attention. Other offenders think that, despite having heard the klap, they must remind everyone around them of the need to say the special insertions during the Amidah itself, and so they verbalize the initial words (e.g., “Ya’aleh Veyavo!”) in a very loud voice. Since it’s unlikely that most others are at exactly the same point in the Amidah as they are, all they succeed in doing is detracting from everyone else’s concentration.

Our davening is full of nuances and subtleties, which means that there are many opportunities for things to go wrong. The gabbai’s klap is a tool, nurtured by tradition and minhag, that when used judiciously can help ensure that everything goes right.

David Olivestone, a member of the Jewish ActionEditorial Committee, lives in Jerusalem. Among his previous contributions to the magazine are articles on what goes on inside the minds of the ba’al teki’ah, the chazan, and the kohen.

While many gabbai’m create their own systems for storing members’ names, recording who got what honor when, and for documenting and safeguarding the shul’s nusach and minhagim, here is a selection of some resources that are available in print and online.

2. Sefer HaGabbai by Rabbi David Avraham Spector. Published in 2005, the sefer contains chapters on all the major tasks of the gabbai. An English translation appeared in 2012.

1. “The Gabbai’s Torah” is a free online course developed by the OU’s Pepa and Rabbi Joseph Karasick Department of Synagogue Initiatives to address many of the important issues facing today’s gabbai. Recognizing that the last year and a half has been extremely taxing on gabba’im and rabbanim as they organize tefillah while taking health and safety priorities into account, the OU launched this digital course that covers topics including “Qualifications of a Shaliach Tzibbur”; “Kaddish Matters”; “Who gets the Aliyah?” and more. Additionally, with the ongoing Covid challenges facing shuls as they prepared for the Yamim Noraim, the OU added a special shiur by Rabbi Mordechai Willig, a rosh yeshivah at Yeshiva University, on “What Will Change and What Will Remain: Assessing Tefilla in Shul after Covid.” The course can be accessed at ou.org/ou-gabbai-seminar.

2. The venerable Ezras Torah Luach is the halachic calendar used in most North American synagogues.

3. Calling the Shatz: A Forum for Gabba’im (Facebook group).

5 3 votes
Article Rating
This article was featured in the Winter 2021 issue of Jewish Action.