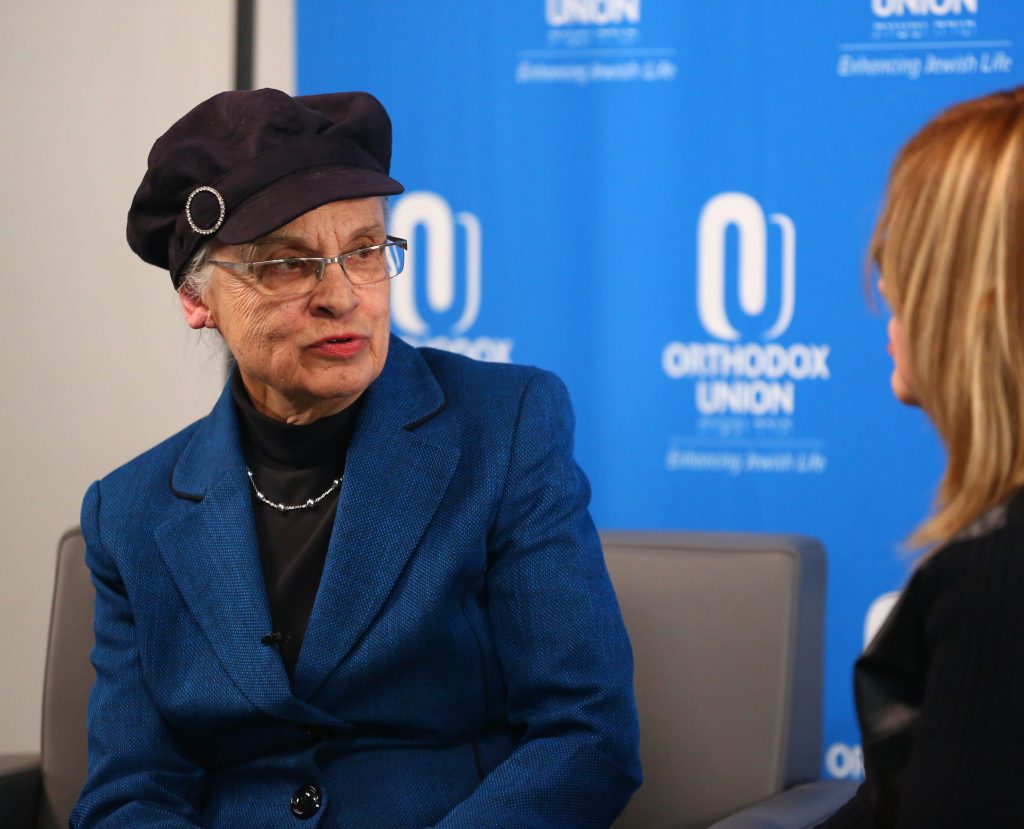 Founded in 1923, the OU Women’s Branch recently closed its doors after some ninety-five years. When American Orthodoxy was in its infancy, well before the day school movement, the idealistic, energetic women of the Women’s Branch persevered to build and strengthen religious life amidst significant challenges. Below, Rebbetzin Dr. Adina Shmidman, director of the OU’s Women’s Initiative, reminisces with Nancy Klein, former administrator and past president of the Women’s Branch, about some of its remarkable achievements.

Rebbetzin Dr. Adina Shmidman: How did you first get involved with the OU Women’s Branch?
Nancy Klein: I grew up with it. My grandmother, Rebbetzin Julie Hirsch Klein—wife of Rabbi Dr. Philip Klein, the rabbi of Congregation Ohab Zedek in New York at the time—was a granddaughter of Rabbi Samson Raphael Hirsch. Not surprisingly, she had a very good Jewish education; she also knew how to get things done. In 1923, she helped found the OU Women’s Branch, where she served as the first acting president. My mother Elizabeth, who was just graduating from college, was involved as well and later served twice as president of the Women’s Branch. When I was a little girl, they didn’t have an office—we would sit at our dining room table to address and stuff envelopes.

AS: Your grandmother seems to have been a woman on a mission. What motivated her to start the Women’s Branch?
NK: There were a number of Orthodox sisterhoods of shuls, mostly in New York City but in other cities too; the women felt that alone they had no influence, but if they banded together, they could accomplish something. Essentially, the Women’s Branch was created to serve as the national organization of Orthodox sisterhoods all over the United States and Canada, to give them the programming and administrative know-how to help their shuls function more effectively. By the 1940s we probably had 500 sisterhoods all over North America.

Sisterhoods at the time served to provide “the extras” that the shul budget didn’t cover—everything from equipping the shul kitchen to buying curtains and seat cushions. Most sisterhoods met once a month. The Women’s Branch provided programming for holidays and produced pamphlets offering guidance on various mitzvot, in addition to fundraising suggestions, and any kind of help the sisterhoods needed.

Before the establishment of our kosher certification program in the 1920s, kashrut in America was chaotic and riddled with abuse.

Over the years there were many different projects that the sisterhoods were involved in. Deeply concerned about women’s education, in 1928 the women established and maintained the Hebrew Teachers’ Training School for Girls in New York City, a school providing higher Jewish education for women. They also initiated a campaign to build a new dormitory for Yeshiva College, raising $250,000, an extraordinary sum in the 1920s. (Eventually, the Yeshiva University Women’s Organization took over those duties.) The Women’s Branch hosted a convention every other year where women from all over the country got a chance to meet other religious women, exchange ideas and learn from each other.

The Women’s Branch was involved in everything. During WWII, for example, we were there for the Jewish soldiers. When hundreds of Jewish boys were being inducted into the service on erev Pesach, we had three days to prepare Sedarim for some 900 men. And we did it!

AS: That’s amazing. What do you consider to be some of the Women’s Branch’s most significant accomplishments?
NK: One of the Women’s Branch’s first and most impressive accomplishments was pressuring the Orthodox Union to expand its kashrut certification efforts. Women were responsible for the expansion of the OU’s certification progam, which today, as we know, certifies over one million products. But before its establishment in the 1920s, kashrut in America was chaotic and riddled with abuse. You had to ask your rabbi which products were okay; there were no standards. In 1924, the OU created the first non-profit, communally sponsored kosher certification. In the early years, the Women’s Branch paid for the initial investigations and analyses of the factories and products. The OU approached the Loose-Wiles Biscuit Co. early in 1924 to suggest baking kosher crackers and cookies. Loose-Wiles Sunshine Kosher Crackers was the first product to receive kosher certification from the OU.

In 1925, a report from the Women’s Branch stated the following:

“This is the first time in the history of our country that kosher crackers are available for use in Orthodox Jewish homes and we feel that by this accomplishment, we have helped to fill a long-felt want among scrupulous and observant housewives.”

The report went on to explain that the Kashruth Committee is “at present engaged in similar negotiations with other companies which manufacture food products.” Soon Heinz became OU certified and thousands of products followed. 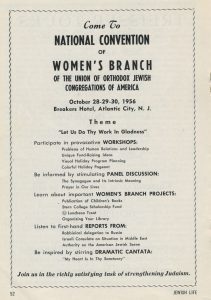 A 1956 advertisement for the National Convention of the OU Women’s Branch in the OU publication Jewish Life (predecessor of Jewish Action).

AS: Aside from kashrut, what were other major areas of concern?
NK: For many years, the prime concern of each sisterhood—and therefore, by extension, of the Women’s Branch—was supporting talmud Torahs. This was before there were day schools. The only way children received a Jewish education was via the shuls’ talmud Torahs. I was taught at home—I guess I knew too much to attend a talmud Torah. Despite this, my Jewish education was not that strong; I wish it would have been better. Of course, by the time my children came along, there were many more options, and they attended Yeshiva University.

AS: Can you share any particular memories about your mother in her role as a Jewish leader?
NK: My mother was very impressive . . . in the ‘40s and ‘50s, she began speaking publicly for the Women’s Branch. She went all over the United States and Canada. I remember as a little girl asking her, “What do you talk about?” And she said, “Judaism!” She devoted many hours to the Women’s Branch and to her own sisterhood. Whenever anybody asked her to speak, she went. She even took a train from New York City all the way to Vancouver—which was not simple back then!

When I was about eight years old, my mother took me to a meeting of the Tomchei Torah Society, which used to raise money for education. I delivered a short speech for the group about how important it is to contribute to the cause. On the subway ride home I said to my mother, “Oh, I should’ve said this,” and “I should’ve said that.” My mother turned to me and replied, “Now you’re a public speaker!”

AS: As Jewish education flourished in this country—resulting in more Jewishly educated children, women and communities, talmud Torahs died out and there became less of a need for the sisterhoods. What else changed in the Orthodox Jewish world so that there was less of a need for a national organization representing sisterhoods?
NK: The Women’s Branch was probably at its peak in the ‘40s and ‘50s, but as women’s roles began to change, sisterhoods did too. There used to be a huge disparity between men and women in their level of Jewish education. Nowadays, men and women both have access to Jewish education. In addition—and this is why sisterhoods no longer exist or exist with a totally different model—women sit on the boards of many shuls and play an active role in the running of the shul itself. Finally, many women today are working outside the home and don’t have time for sisterhood meetings. If they have any time at all, they devote it to their shul itself or to their children’s schools. It’s a different world. About ten to fifteen years ago, I realized that we were losing sisterhoods right and left—while we had over 500 at one point, we were down to maybe fifty. I saw the handwriting on the wall.

One of the Women’s Branch’s most impressive accomplishments was pressuring the OU to expand its kashrut certification efforts. Women were responsible for the expansion of the OU’s certification program, which today certifies over 1,000,000 products.

AS: I think it’s important to recognize that it’s not just women today who have been empowered with the ability and the voice to contribute. Jewish women through the ages have contributed greatly, and the Women’s Branch is a great illustration of this. I know in my new role at the OU, I have big shoes to fill.
NK: It’s extraordinary that these women, starting in the ‘20s and throughout the decades, without a strong Jewish education, without day schools, without TV or Internet, without all the tools that Orthodox women possess today, were able to accomplish so much. Despite the fact that they were often self-taught, they were intelligent, highly motivated and managed to do an incredible amount of work with what they had.