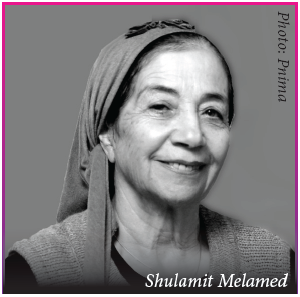 One of the most successful and innovative women in Israel, Rabbanit Shulamit Melamed is the current founding head of the popular Religious Zionist news network Arutz Sheva (israelnationalnews.com). Arutz Sheva was founded in 1988 after Rabbanit Melamed experienced a terrorist attack and was shocked by the radio report, which made it seem as if the Jewish passengers on the bus had been the aggressors rather than the victims. Rabbanit Melamed lives in Beit El. She runs the organization’s news site and oversees the newspaper Basheva. She has seven children.

Translated from Hebrew by Rochel Sylvetsky

For the first fifteen years of my married life, while raising young children, even though I worked outside of the home, I tried to be home the rest of the time. It was important to me that I was there for my children whenever they needed me and that it was a parent who set the tone of family life. Although this was the period when Jewish communities were first being built in Judea and Samaria, I did not attend demonstrations or the ceremonies when yishuvim were founded. I even tried to avoid going to parties and other events, except for family obligations.

At the same time, I devoted myself to my teaching job in Jerusalem. For years I was somewhat frustrated because I felt that I could not handle both my home and even that level of outside employment as well as I wanted to; at one point, I took a year’s leave from work to be at home with my children, even though financially it was difficult. As my children grew however, and I was able to be away from home more, I began to view my work in education as a mission.

When we moved to Beit El, I accepted an offer to be a teaching advisor in a school and teach a class of children with special needs. Both of those positions were less demanding than being a home room teacher, a job which entailed a good deal of responsibility and much after-school time.

Looking at my grown family, I am happy that I chose to find fulfillment at home and in a less demanding job when they were young. My guiding principle to women who ask my advice: do not accept a position if you are not sure that you can give your utmost. Time passes, children grow up, and in the future, the day will come when you will be able to contribute more outside the home. Never forget what your main responsibility is and what’s secondary to it.

Once my children were older, I established the Ra’aya Academy (Ulpana) for Girls, a religious high school in Beit El. The school has expanded greatly and has an excellent reputation scholastically and religiously. Currently, I work there in an advisory capacity.

In 1988, shortly after Ra’aya was founded, when my youngest child was already in school most of the day, I helped establish and became the director of Arutz Sheva news network, a position I continue to occupy today. The Arutz Sheva media venture aimed to present programs “in the spirit of Jewish tradition and Jewish settlement throughout the land of Israel.” [The radio station began operating from a floating studio aboard a vessel anchored off the Tel Aviv coast, just outside Israeli territorial waters.] It was an initiative that involved learning about the media world, a world that was entirely foreign to me and included a myriad of responsibilities like acquiring funding, contending with technical issues, finding suitable broadcasters, deciding on and approving content and troubleshooting. The work was fraught with difficulties, demanding endless time and energy. Had I been aware of what I was getting into, I might never have done it! Still, the public’s positive response to the radio station and the feeling that we were filling a void and doing something special for Israel and the Jewish people was gratifying and gave us the strength to deal with all the challenges we had to face.

Women who choose a career outside the home when their children are young must be careful to ensure that their work does not have a negative effect on their family’s health. The continued existence of the entire world rests on a woman’s shoulders and the continuity of the Jewish world depends on how she raises her children.

I have spoken to sad and lonely older women whose investment in successful career choices made them wait until it was too late to have a family. I have heard them tell me they wish they could be one of the mothers and grandmothers who are kept busy celebrating semachot, the fruits of choosing family over fame.

The late Professor Nehama Leibowitz was, unfortunately, childless, and once said that she would have given up her entire career as the most famous woman Torah scholar of all time to feed a soft-boiled egg to her own child. That, in a nutshell, is the Jewish woman’s scale of values.