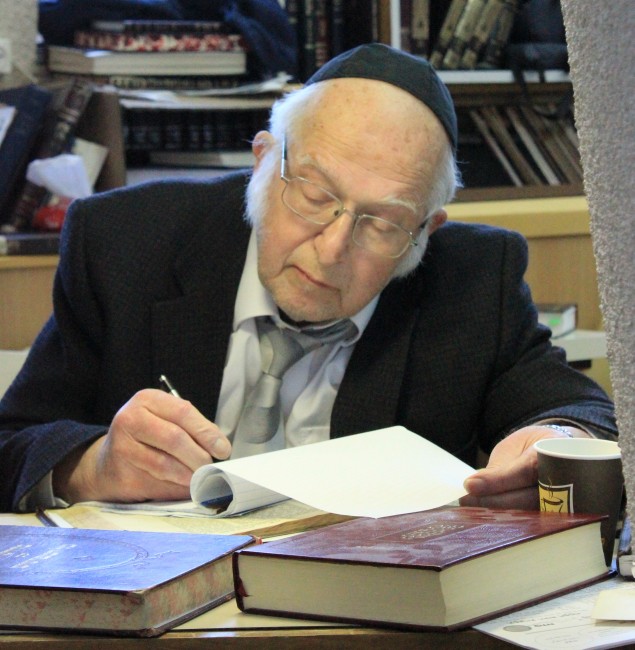 Rabbi Aharon Lichtenstein was born in Paris in 1933 but fled Nazi-occupied France for the United States with his family in 1940. He was recognized as an outstanding student while studying at Yeshiva Rabbi Chaim Berlin under Rabbi Yitzchok Hutner. Subsequently, he attended Yeshiva University, where he studied under Rabbi Yosef Dov Soloveitchik. He earned semichah from the Rav, and went on to complete a doctorate in English literature at Harvard University. In 1960, he married the Rav’s daughter, Dr. Tovah Lichtenstein.
After serving as rosh kollel at YU’s Rabbi Isaac Elchanan Theological Seminary for a few years, Rabbi Lichtenstein was approached by Rabbi Yehuda Amital to serve as co-rosh yeshivah of Yeshivat Har Etzion in Alon Shevut, Israel. Rabbi Lichtenstein accepted the offer, and he and his family made aliyah in 1971. He served as rosh yeshivah at Yeshivat Har Etzion for four decades and taught thousands of students, among them many rabbis and educators. A leading figure in the Religious Zionist world, Rabbi Lichtenstein also served as rosh kollel of Yeshiva University’s Gruss Institute in Jerusalem. Rabbi Lichtenstein was awarded the Israel Prize for Torah Literature in 2014. He passed away on April 20, 2015, at the age of eighty-one. Rabbi Lichtenstein left behind his wife and six children, including head of Yeshivat Har Etzion Rabbi Mosheh Lichtenstein, and many grandchildren and great-grandchildren.

The articles in this section are poignant recollections and stories of Rav Aharon contributed by Rav Aharon’s closest friends and talmidim. Follow the links below to read these special memorial articles:

Rav Aharon: An Appreciation for Complexity

A Gentle Giant of Torah

On Complexity and Clarity

What is the Legacy of Rav Aharon Lichtenstein?

Strength and Splendor: A Tribute of Rav Aharon Lichtenstein

Over the years, Jewish Action has had the honor of publishing numerous articles by Rav Aharon. This was due, in no small part, to the relationship Rav Aharon had with his former classmate Rabbi Matis Greenblatt, the founder of Jewish Action and literary editor emeritus. The following are articles by Rav Lichtenstein that have appeared in the magazine:

Hands Across the Ocean: A Review of Rabbi Aharon Feldman’s The Eye of the Storm Spring 2010

The Orthodox Union Centennial Symposium: Our Next 100 Years: The Future of American Orthodoxy Fall 1998

The Source of Faith is Faith Itself Fall 1992

Response to Jewish Action Symposium 5747: The Strength of Orthodoxy and the State of Klal Yisrael Fall/Winter 1986