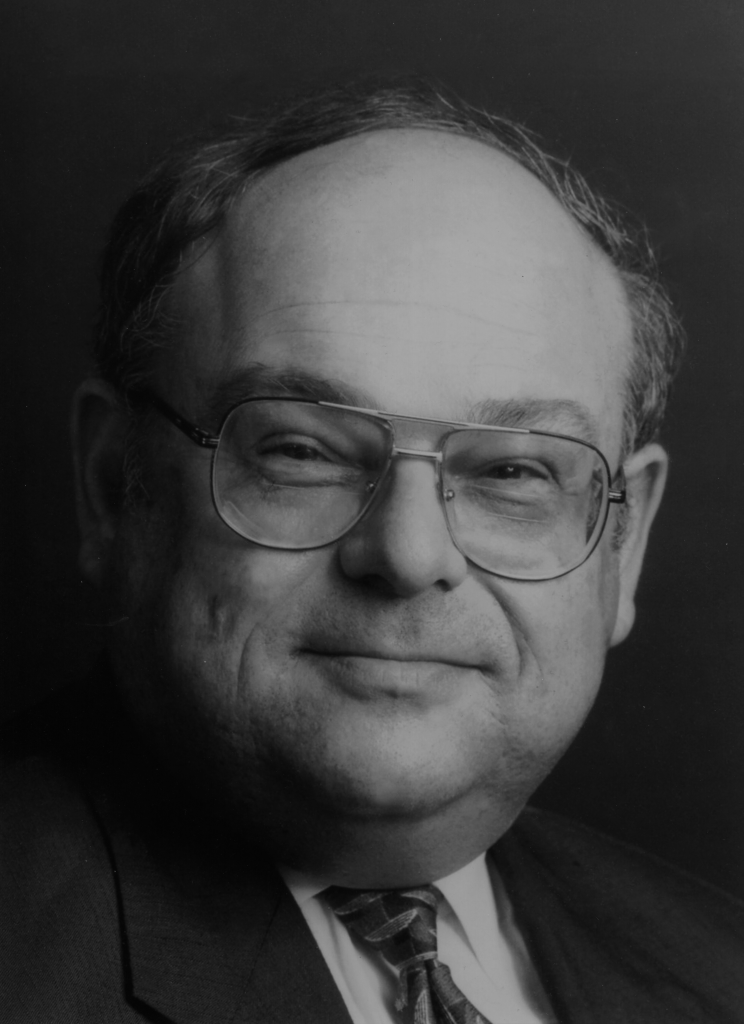 Most people recall Dr. Mandell “Mendy” Ganchrow, z”l, who passed away in February of 2022, as the ultimate “doer.” As president of the OU from 1994 to 2000 and a long-standing officer of the OU, Dr. Ganchrow boasted an extensive list of achievements.

Under his energetic leadership, the OU saw dramatic growth, especially in its Israel-related educational and political activity. He established the OU’s Institute for Public Affairs (IPA), the political advocacy arm of the OU (today the OU Advocacy Center), which subsequently opened an office in Washington. He helped launch NCSY in Israel as well as the Seymour J. Abrams Jerusalem World Center.

Mendy was “a ball of fire and a phenomenal fundraiser whose sole agenda was the Jewish people,” says Dr. David Luchins, an OU officer since 1974.

“He was a smart problem solver with the warmest of smiles, who possessed a uniquely effective, motivational leadership style,” adds Steve Savitsky, who grew up with Mendy in Crown Heights and succeeded him as OU president. “He had the kind of vitality that always moved the organization forward.”

A medical doctor who served as a MASH surgeon during the Vietnam War, Dr. Ganchrow never compromised his religious principles and strove to keep Shabbat and eat only kosher during wartime. “My father took it upon himself to fill in as the Jewish chaplain, leading Shabbat and High Holiday davening with his fellow soldiers,” recalled his daughter, Malkie Ratzker, in an article in the New Jersey Jewish Link.

A prodigious writer, Dr. Ganchrow described his experiences in his autobiography, Journey Through the Minefields; he wrote several books on Jewish topics as well, including three anthologies of divrei Torah for different occasions: Coming of Age (New York, 2012) for a bar/bat mitzvah; Entering the Covenant (New York, 2001) for a brit/pidyon haben; and Sason VeSimcha (New York, 1996) for sheva berachot.

Fearing he would die at the same young age as his father, Dr. Ganchrow decided to retire at the age of fifty-seven after running a successful medical practice for decades. Sheila, his devoted wife of nearly sixty years, proudly shares that he retired early so he could “dedicate himself fully to Klal Yisrael. He had the ideas and leadership qualities to do it. When he left medicine to fulfill his dream, the OU became his life.”

Passionate about Israel and working for the klal, Dr. Ganchrow was politically active even before his tenure at the OU. He firmly believed in the power of effective advocacy. With the Jewish people and the State of Israel as his bottom line, he worked tirelessly with political leaders on both sides of the aisle. A resident of Monsey, New York, he founded the Hudson Valley Political Action Committee (HUVPAC), a local grassroots initiative that was an outgrowth of his pro-Israel advocacy experience with AIPAC; HUVPAC would provide the model for NORPAC, in which he played a critical role as well. Over the years, HUVPAC became one of the largest pro-Israel PACs in the country. Dr. Ganchrow’s daughter remembers him raising “millions of dollars for pro-Israel candidates” and that “congressmen and senators would be in and out” of their Monsey home.

When Dr. Ganchrow joined the OU in the 1980s, Jewish political advocacy was largely the arena of secular Jewish organizations, which had only a small number of Orthodox activists. While their interests overlapped, the Orthodox community at large had its own specific priorities, such as support for day schools and workplace accommodations for Sabbath observance. “Mendy understood that it was important for the president, senators and members of Congress to see that the Jewish community is not monolithic,” says Nathan Diament, director of the OU Advocacy Center, who was hired by Dr. Ganchrow.

Dr. Ganchrow pushed hard from the get-go, insisting that the OU establish its own voice in Washington. The organization responded by founding the Institute for Public Affairs (IPA). One of the IPA’s accomplishments was to bring bright, politically-minded college students into the political process by having them intern for AIPAC in the summer. When the program proved to be successful, the IPA began providing college students with the opportunity to serve as interns in the offices of congressmen and senators. Dr. Ganchrow chaired the IPA before taking the organizational helm.

“Some were skeptical of ideas like establishing relationships with political candidates,” recalls former OU President Harvey Blitz, “but Mendy was passionate and forged ahead. In retrospect, everyone felt it was obvious that we needed to do it. Mendy had, of course, been right.”

Eventually, the OU established a Washington office due to “Mendy’s foresight and perseverance,” says current OU President Moishe Bane. “Today, thanks to Mendy, the OU Washington office is an incredible voice for the advancement of Orthodox interests in Washington.”

“Mendy held on to his vision, even though it took a lot of convincing for others to see it was needed,” notes Luchins. “Today, no one questions it. Our DC office is critical to the work we do.” Dr. Ganchrow’s personal skills and his “charismatic bedside manner” fueled his success as a visionary in the arena of Orthodox political advocacy—undoubtedly his greatest Jewish communal legacy. 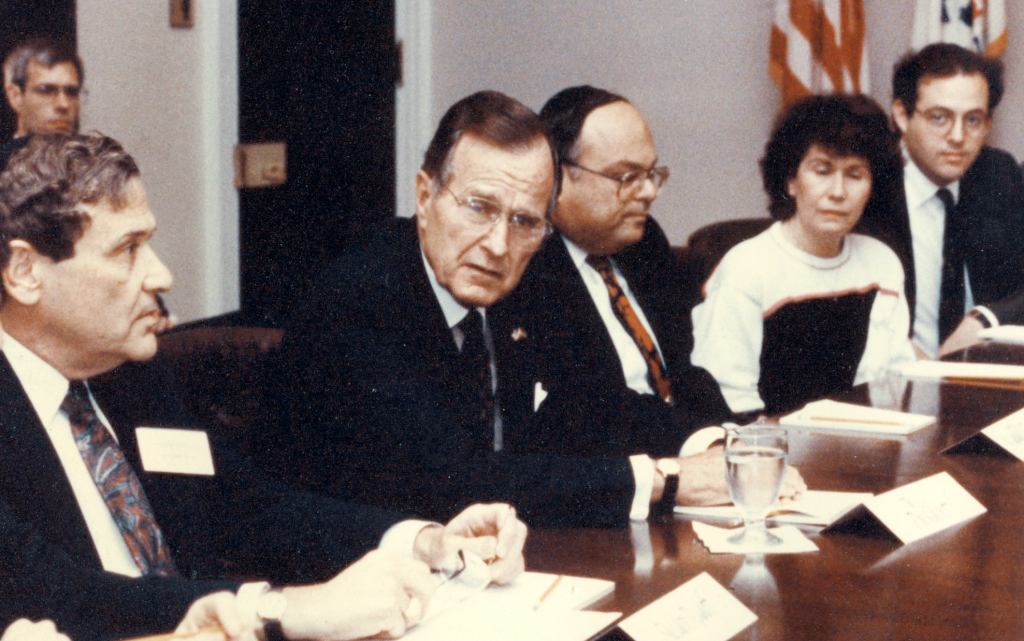 Dr. Ganchrow’s initiatives continue to impact policy decisions made on the Hill today, adds Diament. He cites as an example FEMA’s refusal to provide federal aid for the repair of a local Jewish day school in the aftermath of a 2001 earthquake in the Pacific Northwest. The OU fought the decision, overturning FEMA policy regarding religious institutions, while garnering broad bipartisan support. The ripple effect bore fruit most recently when FEMA awarded an extensive security grant to day schools and shuls.

“That trajectory began under Mendy’s leadership,” says Diament. “He had a vision of an assertive American Orthodoxy, and he leveraged it to impact the OU and the community at large. You need that kind of confidence to walk into the White House or a senator’s office with a list of asks.”

That confidence enabled him to meet with politicians who were not known to be especially friendly toward Israel, and to try to convince them to change their minds. One such politician was Senator Steve Symms of Idaho, who consistently voted against the interests of the Jewish State. At an initial meeting with Dr. Ganchrow, the senator implied that the American Jewish community was guilty of dual loyalty. Proving his patriotism, Dr. Ganchrow countered that he had not only served in Vietnam but he had the medals to prove it. The senator shifted his tone completely. Ultimately, he became a good friend of Dr. Ganchrow, and his position on Israel softened.

Dr. Ganchrow traveled throughout the US, meeting community members and leaders, assessing the organization’s impact and keeping his finger on the pulse of communal needs. Underlying all of his efforts was his love for his people and the Jewish State. Savitsky recalls how during the intifada in 2000, “Mendy was devastated” that American Jews were not traveling to Israel, and as a result, he arranged and led several missions to Israel. “This wasn’t an economic decision to help the country because it had lost tourism. It was a Jewish decision. He felt strongly that we needed to show solidarity.”

But the Ganchrow grandchildren know that their grandfather’s success lay in the fact that he never took no for an answer. This physician-turned-statesman had passion, vision and, above all, the ability to get things done.

“Mendy was a doer in every respect, and he was eager to help people,” says Rabbi Menachem Genack, CEO of OU Kosher. “He was a good friend, a caring doctor, a klal mensch. He was always smiling. Always optimistic. And he brought all of that to the OU.”

5 2 votes
Article Rating
This article was featured in the Summer 2022 issue of Jewish Action.