“Everyday Kindness” is a column where we highlight small and not-so-small acts of kindness that happen each and every single day. Small acts with a big impact. Do you have such a story to share? Send it to ja@ou.org under the subject line “Everyday Kindness” and it might appear in our next newsletter! (Reprints are acceptable.)

For one Orthodox resident of Kansas City, Missouri, Sukkot starts a month and a half before the first night of yom tov.

At least the sukkah-building planning work does.

Dr. Jay Robinow, a semi-retired radiation oncologist, has for fifteen years volunteered to build sukkot for members of the city’s Jewish community, and for Jews across the state border in Kansas. Many of the recipients of his chesed are strangers. 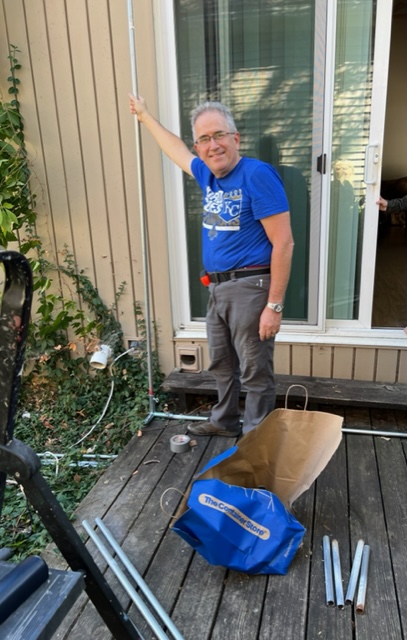 The sukkah-building began as a fund-raising project for the city’s community kollel. “I did most of the labor,” says Dr. Robinow, a native of Des Moines, Iowa. Now he does the sukkah building on his own, donating any money he makes to local Jewish causes. (Usually he does his service at no charge, but asks $300 from people who can afford to pay; others he charges just for parts.)

“I don’t know how many requests I will get,” he says, so he starts his work in advance, ordering parts and making a list of people who will need a sukkah, to avoid doing everything at the last minute. By his estimate, last month he put up, expanded, “recycled” or supervised the work on more than 100 sukkot, sometimes as many as three in a day.

A baal teshuvah, he is a member of Congregation Beth Israel Abraham and Voliner, an OU shul in Overland Park, home to most of the area’s Jewish community. Dr. Robinow first studied the Talmudic laws about embarking on this project. He has spent about $9,000 of his own funds on sukkah materials.

“Let’s just say this would not be a good case study for the Harvard Business School,” he likes to say. “It’s definitely a money-losing business.”

The Kansas City Jewish Chronicle called him a “Doctor by day—sukkah savior by night.”

Often working as late as midnight on his sukkah projects, he’s built them for newcomers to the Jewish community, for single mothers who cannot do it themselves, for young couples during their first year of marriage, for large frum families, for some less-observant families, and for other individuals and families who need his help. He’s built a sukkah on a balcony, built another on an hour’s notice for a Kansas City native who arrived erev chag from Israel to sit shivah for his father.

How does he find out about these people? “Strictly word of mouth,” he says—no social media, no posters, no announcements in synagogue bulletins. “People talk to people.”

Donny Schwartz, NCSY Midwest regional director, calls Dr. Robinow “a community builder.” The doctor and his wife, Dr. Margie Robinow, “work hand in hand in all the chesed they do. They have an eye for identifying a need and doing the work to make it happen. They are not just writing a check, they are deeply invested in the success of Jewish Kansas.” The Robinows are active supporters of NCSY and the community kollel, and Dr. Rabinow is also known in the community as the “Challah Man” for the large number of challot he bakes and distributes each week. And when people ask, “Who built your sukkah?” they hear Dr. Robinow’s name.

Among his many sukkah projects is the sukkah outside Kansas City’s Jewish Community Center.

“It was my gift to the JCC,” Dr. Robinow says. “It’s really a labor of love. In some ways, it’s become a kiruv initiative, inspiring people to strengthen their commitment to Yiddishkeit. But that’s not its main purpose. I just want people to be able to sit, and eat—and sleep, weather permitting—in a sukkah during the holiday.”

Dr. Robinow was interviewed about this by Jewish Action by phone one morning. But he had limited time for the interview as he had more sukkot to put up. “I’m working on three sukkot today.”

On the day that the Jussim family of Baltimore moved into their new home seven years ago, Tova Jussim gathered her nine-year-old triplets around her and gave them some advice.

An inspector had told her that the home’s second-floor bathroom door had a rare, century-old lock that could not be opened if the door was shut tight—and should not be shut under any circumstance, the kids’ mother informed them. Whereupon, one of the triplet sons “promptly” walked upstairs and locked himself in the bathroom.

It was a Sunday night. No locksmith was available. The Jussims could not open the door.

Within minutes, five volunteer members of the Baltimore branch of the non-medical emergency response organization showed up. For almost ninety minutes they worked to free the Jussim son, who calmly waited in the bathroom. Three volunteers outside scaled a ladder to see if the window was open or could be opened; it wasn’t, and it couldn’t. The other two volunteers, inside, tried to open the door; it wouldn’t budge.

Finally, they drilled a hole in the door; it opened, and the son walked out.

Another typical night for Chaverim (chaverimofbaltimore.org).

The fifteen-year-old Baltimore branch (one of four dozen in the United States, Israel, England, France, Australia, Canada and Belgium) of the two-decade-old international organization specializes in such calls for help. Its volunteers help people who are locked in or out of homes, children locked in a car, drivers who run out of gas or whose car batteries have died, and others who have a flat tire.

Think AAA with a kippah.

Chaverim (Hebrew for “friends”) is the Jewish community’s non-profit lend-a-hand equivalent of Hatzalah (which deals in medical emergencies) and Shomrim (which does security patrols).

“We deal with everything else,” says Zev Weiss, Unit 59, his Chaverim title. (“Unit” is the organization’s official designation of the volunteers who handle the calls; “59” is his ID number.)

With Sukkot upon us, the work for the Chaverim volunteers will probably increase, Weiss says. Its added activities are not directly related to the yom tov, but to the increased number of travelers in the Orthodox community who embark on chol hamoed travels and may require assistance when they have flat tires or other similar problems, he says.

A business analyst, Weiss has volunteered, on call three or four times a week, mostly at nights and on weekend, for two years. After the Covid quarantine began, “I had time” to devote to helping other people, he says in explanation of signing up for Chaverim.

He is among some forty Chaverim volunteers in Baltimore—the growing figure includes those who go out on calls (all men), and the dispatchers (mostly women), working from home, who handle the calls and put the units in touch with the people who need help. Each volunteer carries a high-powered walkie-talkie (aka a “radio.”)

Most calls come from local residents—but the needs of travelers, far from home, also become the responsibility of the closest chapter.

“If one is stuck in a remote area, be it a shopping center, hospital, park or destination outside the proximity of a larger Jewish community, assistance will likely be delayed. At the same time, considering the extensive network of members across the spectrum of various geographic locations, it is highly likely that a Chaverim member from a different area is nearby, available and willing to help,” according to the central Chaverim website (interstatechaverim.com). “Logic dictates to call the Chaverim organization from the community you are nearest. Precious time is lost waiting for a member to make the long drive to assist you, while you may be minutes away from an existing Chaverim member belonging to a different area.”

The Baltimore branch was formed by David Bagan, a kashrut mashgiach who was impressed by the reports he heard of Chaverim work in other cities, and put out a call for volunteers. That branch has assisted some 30,000 people, says Bagan, who still goes out on calls, and interviews and trains new volunteers, and handles the branch’s fundraising.

Most of the calls come from members of the Jewish community. But non-Jews who have heard of Chaverim’s reputation occasionally call too. “We respond to anyone” in need, says Sarah Don, a volunteer dispatcher for thirteen years.

Some volunteers are available 24/7. On Shabbat, a call for a lost person or a child locked in a house is considered a pikuach nefesh emergency. Volunteers outside of radio-calling distance can be reached by text or the branch’s WhatsApp group.

Rabbi Nesanel Kostelitz, rosh kollel of the Baltimore Community Kollel, serves as the chapter’s rabbinic advisor, ruling on matters of Shabbat observance and other sheilot.

Why do the volunteers give up their spare time to help strangers?

“You know you can depend on your friends,” says Weiss.

“I really feel I’m helping people,” says Don. Hatzalah volunteers, she says, sometimes find themselves at scenes where someone has died, or is about to. With Chaverim, she says, “It always ends well.”

Chaverim volunteers have expanded the definition of emergencies they can handle—chasing a bat out of a caller’s home, directing traffic at accident scenes, pulling a car out of the mud. And dancing at people’s weddings.

And rescuing a nine-year-old child who tempted fate by getting locked in the bathroom of his family’s new home.

After Chaverim extricated the Jussims’ son from the family’s bathroom, they replaced the faulty lock, Tova Jussim says.

She says she has become one of Chaverim’s biggest boosters. “I tell the story [of the son locked in the bathroom] all the time.”

But that did not end their relationship with Chaverim. Their car died one day. Chaverim volunteers got it started.