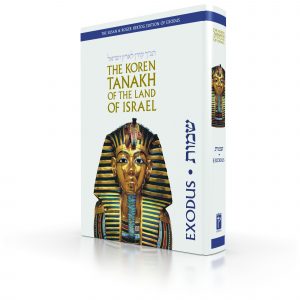 This unique Torah commentary immediately establishes that its purpose is to help the reader associate the messages of the second book of the Torah with our current experiences as a people. This includes finding our heritage in the aftermath of a cataclysmic event that sought to subdue, weaken and kill us. Our history began as a people in exile, a place most Jews have lived for the last two millennia. This edition of the Koren Tanakh of the Land of Israel series (this is only the first volume in a projected series on all of Chumash and most of Nach) comes at an auspicious time for our people. We continue to flourish in our homeland, Israel, while every shovel that breaks ground in that land unearths some testament to an ancient people that once lived there and never gave up the dream of returning. These archaeological testimonies are the veritable markers (tziyunim) that the prophet Jeremiah exhorted us to set down to vouchsafe our return:

There is precedent to read Sefer Shemot as a guide to returning to the Land. The nineteenth-century commentaries, the Netziv, Meshech Chochmah, Malbim, Rabbi Samson Raphael Hirsch, and others all used their commentaries on Shemot to underscore the challenges facing the Jews in the Diaspora.

This work adds even more. In the beginning, the reader is directed how to connect the Torah text, especially in the early parts of Shemot, to the study of Egyptology, which sheds extra light on the religious, cultural and social milieu to which the Israelites were exposed. This helps us better understand certain phrases in the redemption story and is especially helpful in navigating the texts of the ten plagues. This volume includes a full archaeological background along with a selection of parallel sources from the ancient Near East. These archaeological sources are not meant to arm us with the assuredness of the historicity of the events described in Shemot. If you are looking for proof of the Exodus from this book, you can just as easily find many other books that try to disprove the Exodus from archaeology. What this book instead offers the reader is very convincing testimony to what is written in the Torah, and the witnesses are many. We believe the Exodus happened the same way we believe the Holocaust happened—our elders told us about it. Testimonies strengthen that belief.

In three sections, the reader is drawn to numerous ancient Near Eastern parallels to the Torah. The first is largely in the form of similar narratives, such as the actions of the desperate parents of an imperiled child who grows to redeem his people. This, of course, describes Moshe in our story, but it also describes the Mesopotamian Sargon, King of Akkad, who preceded Moshe by 1,000 years (p. 11). The reader of the Koren Tanakh need not feel threatened by such similarities any more than we would feel threatened by similarities between the ancient flood epics and the story of Noah’s ark. The Torah always has morality at the epicenter of every story, an element missing from other ancient stories in practically every case. This is equally true of story of the Yam Suf splitting for the fleeing Israelites whose lives were at stake and that of the waters parting for King Snefru (which took place 1,000 years earlier) so that a pendant could be retrieved (p. 78). This section contains dozens of parallels that either shed light on the Biblical story, such as slaves taking time to worship their own God (p. 21), or contrasts it, such as in the description of miracles with snakes (pp. 23-24; 38-39). The Tanakh also notes similarities between the Song of the Sea and ancient triumphal poems (pg. 81).

The second parallel relates to law. The psalmist could certainly be aware of ancient law codes that long predated the Torah, yet he declares “u’mishpatim bal y’daum—Of such rules they [other nations] know nothing” (Psalms 147:20). This audacious statement stands in contrast to our laws for reasons that are made abundantly clear in the Koren Tanakh’s treatment of Parashat Mishpatim, perakim 21 to 23 (pp. 113-137). Hammurabi and Lipit-Ishtar write laws to maintain order so that the gods can be served properly. Torah law creates a moral and upright individual, and that in and of itself is the service of the Deity. Cuneiform law is reactive, responding to situations that arise while the Torah is proactive, guiding us and telling us what to do. Cuneiform law is documented for the king and his inner circle while Torah law is open and is meant to be placed like a “set table” before the masses. Indeed, the Revelation itself is distinguished by its public presentation before the entire Jewish nation, while the source of Cuneiform law is shrouded in mystery and the occult.

The third parallel relates to the ritualistic element of Sefer Shemot: the construction of God’s sanctuary. In this section the reader will find the most significant assistance in understanding the Torah in light of the cultural and religious milieu of the ancient Near East. On the verse “Mishchu u’kchu la’chem tzon—Draw yourselves and take lambs” (Shemot 12:21); our sages comment that the purpose of the Passover sacrifice was to draw us away from the service of the gods of Egypt to the service of the only true God. This third section of Exodus demonstrates with many examples how our sanctuary and sacrificial service would perform the same task. This is the well-known position of Maimonides (Moreh Nevuchim III:29ff) and is brought to sharp relief in this work.

The introduction of Koren Tanakh of the Land of Israel (p. XIV) indicates that this series does not assume any background on the part if its readers. Yet the seasoned reader who reviews the weekly Torah portion will find useful information for a well-rounded connection to Tanach. The scholar who is familiar with Nahum Sarna’s Exploring Exodus, Shalom Paul’s Studies in the Book of the Covenant in Light of Cuneiform and Biblical Law or Yehezkel Kaufmann’s Toledot HaEmunah HaYisraelit will appreciate the traditional parameters maintained by the Koren editors. I have found many cases in which a statement in this work corroborated by archaeology is actually found in the Midrash or in a medieval commentary. Pointing this out would have burdened the work with hundreds of footnotes, making it cumbersome and difficult to handle. Instead, there is an excellent index of articles, organized by the order of the text, and the reader would do well to supplement the body of the Koren Tanakh with these valuable sources. Sefer Shemot begins with a reference to Yaakov and his household and ends with a reference to the house of Israel. We begin the book as a people without a home, without a purpose and without freedom. The book ends before we come to our home but not before we build a home for the Divine Presence. This new volume from Koren is a home for the serious scholar and reader of Torah.

Review of Sarah Schenirer and the Bais Yaakov Movement: A Revolution in the Name of Tradition by Devorah Goldman

Reviews in Brief by Gil Student