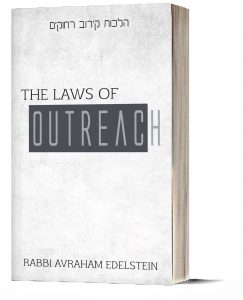 The Laws of Outreach

The ascendancy of a confident Orthodoxy in the second half of the twentieth century pushed the community from a position of defense to that of action. Many Torah leaders actively and emphatically encouraged rabbis and laypeople to reach out to non-Orthodox Jews in order to help them strengthen their bonds to Judaism. In response to this call, a cadre of enthusiastic and idealistic couples became outreach professionals. Halachic questions arise whenever an observant Jew exits the comfortable environment of mutual observance. When someone makes a career of directly interacting with specifically non-observant or partially-observant Jews, the questions multiply.

Rabbi Avraham Edelstein is the outreach rabbi’s rabbi. During his many years at Ner Le’Elef, an organization providing training in Jewish leadership, he guided rabbis who dedicated their careers to outreach. Because of this intimate knowledge of the challenges of outreach based on the combined experiences of his students, Rabbi Edelstein’s The Laws of Outreach consists of an encyclopedic exploration of these topics. The book covers the obligation to rebuke people for their religious failures, outreach as a rescue mission, aiding in the commission of a sin, and more. Rabbi Edelstein also addresses broad theoretical questions involved in outreach such as the mitzvah to reach out, obligations toward non-observant Jews and categorizing sinners.

Rabbi Edelstein follows a strictly halachic methodology, building on primary texts and following the arguments throughout the centuries with an emphasis on late twentieth-century authorities. While Rabbi Edelstein does not offer practical conclusions, often he directs readers to where he believes the texts and sound arguments lead. For example, in his section on male-female interactions, while offering quite a spectrum of opinions, he emphasizes those that permit men to shake women’s hands in one form. And in his section on outreach through food, he quotes halachic opinions on both sides of the issue but seems to find the argument to permit giving food to a man who insists on reciting a blessing without covering his head to be more convincing. This comprehensive book serves as a unique reference of fascinating topics and contains many rulings unavailable elsewhere. 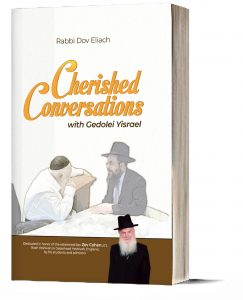 Most readers are familiar with the problems in the “gedolim story” genre. The history is questionable; ideology trumps accuracy; too many books contain cookie-cutter descriptions of rabbis who end up lacking personality and depth. Rabbi Dov Eliach breaks the mold with his Cherished Conversations with Gedolei Yisroel.

Previously, Rabbi Eliach published Hebrew biographies of the Vilna Gaon and Rabbi Mottel Pogremanski, who was a brilliant, young Torah scholar in Lithuania who died in 1950. Rabbi Eliach’s research into these figures gained him access to leading rabbis in the Lithuanian yeshivah world over the past three decades, many of whom were among the last remnant of the pre-War yeshivah world. He encouraged these rabbis to reminisce at length and compiled these interviews in a book, recently translated into English.

Cherished Conversations with Gedolei Yisroel does not claim to be a history book. It is a collection of reminiscences, primarily about the Lithuanian yeshivah world in Europe and Israel by those who continue its traditions. This inside look will delight those with even a passing familiarity with those yeshivot. Rav Shmuel Berenbaum discusses his time studying under Rav Elchonon Wasserman in Baranovich and Rav Eliezer Yehudah Finkel in Mir. Rav Moshe Shapira tells about his time in Telz and his transition to the Slabodka Yeshiva in Chevron. Rav Betzalel Rakow talks about his seven years in Montreux, Switzerland, with Rav Yechiel Ya’akov Weinberg and Rav Ya’akov Edelstein discusses his experiences as one of the founding students of the Ponevezh Yeshiva in Bnei Brak. Throughout, Rabbi Eliach coaxes the speakers to highlight the unique personality traits of the people of whom they speak, and the characters of each yeshivah. He looks for distinct characteristics, which the interviewees leap at the opportunity to discuss. In particular, Rabbi Eliach developed a close relationship with Rav Chaim and Rebbetzin Batsheva Kanievsky, both of whom open up to him at uncharacteristic length.

Rather than claiming to be history, this book openly reports stories that reflect the worldviews of the speakers. These are conversations with great people about great leaders and great institutions. 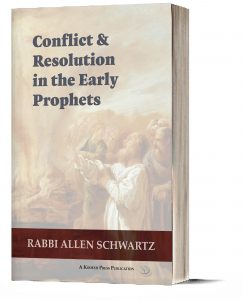 Conflict & Resolution in the Early Prophets

It is a fundamental belief of Judaism that God gave the Jews—both the Written and Oral Laws. This belief requires elaboration because seemingly it encompasses such a wide variety of laws and traditions that appear irreconcilable. For example, the Bible includes many stories in which characters ostensibly violate laws contained in either the Oral Torah or the Five Books of Moses. Students of both Biblical and rabbinic literature rightly note and question these many inconsistencies.

Of course, these students will also note that the Sages of the Talmud were well aware of these issues and addressed them in one fashion or another. Rabbi Allen Schwartz collects, categorizes and analyzes over 100 instances of apparent Biblical violations of Torah laws in the Early Prophets. He adds to this the resolutions contained in the Talmud, Midrash and early commentaries, the explanations that unite the Torah into a comprehensive whole.

For example, in Judges 13:4, an angel tells Samson’s mother to avoid unclean foods, implying that previously she had eaten non-kosher food. If that was the case, why wasn’t she chastised for her religious failings? The text seems to imply that keeping kosher is optional, a praiseworthy but not obligatory behavior. Rabbi Schwartz cites the Talmud (Sotah 9b) and Midrash (Bamidbar Rabbah 10:5) which explain that unclean food in this case does not refer to non-kosher food but rather to food not permitted to Nazirites.

Perhaps even more serious is Tamar’s telling her brother Amnon to forestall his sexual attack on her, that if he asks the king in a proper manner, he will allow them to marry (II Samuel 13:13). However, wouldn’t that be incest? The Talmud (Sanhedrin 21a) explains that Tamar was the daughter of a yefat to’ar, a captive maiden, which would remove her from the status of sister to Amnon.

Overall, Rabbi Schwartz categorizes four types of resolutions, of which the last acknowledges a violation of law albeit as a temporary measure within allowable confines. This valuable reference includes numerous citations from early and later commentators, as well as from academic literature. This volume would be even more valuable if a future edition includes a discussion of the plausibility of these resolutions. In my experience, while many rabbinic explanations seem implausible at first read, after delving into the subject from multiple angles, they grow in depth and reasonability.

Review of Sarah Schenirer and the Bais Yaakov Movement: A Revolution in the Name of Tradition by Devorah Goldman