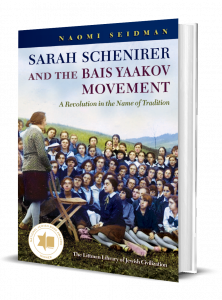 Sarah Schenirer and the Bais Yaakov Movement: A Revolution in the Name of Tradition
By Naomi Seidman
The Littman Library of Jewish Civilization, in association with Liverpool University Press
Liverpool, 2019
448 pages

What is a Bais Yaakov girl?,” a friend asked as we discussed Sarah Schenirer, the founder of the girls’ school movement. It’s a difficult question to answer if you’ve never met one. But on a trip to Poland in the summer of 2010, Professor Naomi Seidman immediately identified a group of such girls in the courtyard of Krakow’s Remuh Synagogue. She asked the young women if they were in town for the Jewish Culture Festival, which Seidman had been attending with students from the Graduate Theological Union in Berkeley, California. To Seidman’s surprise, they informed her that they were there to visit the gravesite of Sarah Schenirer.

Decades before, Seidman had been immersed in the world of Bais Yaakov. Both of her parents were pioneers in Sarah Schenirer’s enterprise: Her mother taught in European Bais Yaakov schools before, during and after World War II, while her father, the journalist and academic Hillel Seidman, was a frequent contributor to the now-defunct Bais Yaakov Journal as well as the author of what seems to be the first book-length history of the school system. Naomi, who left Orthodox Judaism at the age of eighteen, found herself unexpectedly drawn to Sarah Schenirer as a research subject following her encounter in the Remuh courtyard. Seidman’s endeavor shed light on her own family history and culminated in her latest book, Sarah Schenirer and the Bais Yaakov Movement: A Revolution in the Name of Tradition.

In the introduction, Seidman explains that the book is “an exploration of the phenomenon of Bais Yaakov, guided by a set of questions that already presented themselves in inchoate form at that encounter in 2010.

What was it that I had instantly seen in the group of young women? What is a Bais Yaakov girl, as a historical phenomenon, as a “new kind of woman”? How were the first Jewish girls who attended the institution Sarah Schenirer had founded related to the group of girls I had run into that afternoon? Who was Sarah Schenirer, and how had she helped create this new type of young Jewish woman, who in turn remembered (and misremembered) her?

Sarah Schenirer is a near-mythic figure in Bais Yaakov schools, but the facts of her life are rarely taught in detail, and her own writing is virtually never studied. Some basics are widely known: She was born in 1883 to a Chassidic family in Kraków, where she received little formal education and eventually earned a living as a seamstress. After some time, as authors Leslie Ginsparg Klein and Ann D. Koffsky put it in their children’s book, Sarah Builds a School, Schenirer began “sewing clothes for souls” by teaching Torah to Jewish girls in a small classroom.

This is all true, though it leaves quite a bit out, including Schenirer’s two marriages and the evolution of Bais Yaakov from a grassroots movement to an organized institution and back again. And few Bais Yaakov girls today seem to have any notion that Schenirer was a prolific writer: her essays, plays, memoir and textbook on Judaism played a major role in establishing Bais Yaakov’s culture at the outset. As Seidman notes at the start of the book, she had vacillated at first between simply providing a translation of Schenirer’s works—most of which have never been rendered into English—and providing a history of the movement with just a few translated pieces in an appendix. She ultimately combined these projects by including a book-length study of Schenirer with a substantial collection of Schenirer’s translated writings. Following the book’s publication, Seidman has continued to provide translations of Schenirer’s essays and related materials on a web site, TheBaisYaakovProject.com. This in particular is a public service on Seidman’s part; Schenirer’s work ought to have been made available for English speakers long before now.

But Seidman’s other questions still stand: Who was Sarah Schenirer, and how did she create an institution that not only survived two wars when other schools were destroyed, but which seems to form a particular kind of person? Seidman attributes part of Bais Yaakov’s success to the “rags-to-riches” quality of the story that’s frequently told about Schenirer: that of a poor young woman whose drive to learn and teach saved countless other young women from assimilation. But she also debunks components of Bais Yaakov’s founding narrative, such as the belief that Schenirer was the first to successfully provide formal Jewish education to Orthodox girls. Schenirer was indeed the first to do so in Krakow—a uniquely impressive accomplishment due to the diverse Chassidic movements in that city. But there were other movements throughout Europe that had preceded or coincided with Bais Yaakov—Rabbi Samson Raphael Hirsch, for example, established the Realschule in 1853, which provided rigorous elementary and secondary school education to both boys and girls. Thousands of girls in Russia attended female-only cheders in the 1890s, and the Yehudiah school system emerged from a girls-only cheder in Vilna around that same time. In 1920, forty Yavneh schools, including girls’ schools, were founded by a grassroots group composed of Religious Zionists and non-Zionists alike. These and other initiatives were designed, at least in part, to shield young women from assimilation by providing them with Jewish education.

By the end of World War II, they had all but disappeared. So what made Bais Yaakov different? Schenirer opened her first school in 1917, in the midst of World War I. She passed away in 1935, at the age of fifty-two. The Bais Yaakov movement flourished during her lifetime, persisted throughout the Holocaust, and became a global phenomenon following World War II. Many rightfully point to Schenirer’s unconventional network as an element of this triumph; she was born into a Chassidic family but became a disciple of the decidedly non-Chassidic Rabbi Samson Raphael Hirsch, and incorporated his teachings into the Bais Yaakov curriculum. She also won the approval of Jewish leaders ranging from the Belzer Rebbe (Rabbi Yissachar Dov Rokeach) to the Chofetz Chaim and the Gerrer Rebbe (Rabbi Avraham Mordechai Alter), a feat which was undoubtedly due to her personal integrity and righteousness.

Yet Seidman points to another possible key to Bais Yaakov’s success. Before she began Bais Yaakov, Schenirer launched a separate project, a youth movement known as the Orthodox Girls’ Union. This was aimed at teenage girls and involved a variety of activities along with Torah lectures. Schenirer wrote of her disappointment with the program, noting that while the girls may have been inspired by her speeches, “they still couldn’t submit to the commandments of Jewish law and fulfill the Torah. And no wonder: most of the members were already young women . . . it wasn’t easy to persuade them to take on a new, truly Jewish life.” She concluded that “One had to begin with children,” and that she “would have to start schools for young girls.”

Seidman argues it was no accident that Schenirer began with a youth movement instead of a school. Schenirer’s diary reveals that she had often been lonely as a child and young woman; the secular culture of Krakow held little appeal for her (though she did read some Polish poetry), and the opportunities for meaningful Jewish engagement were very limited for young women. The trends that led to this state arguably began in 1869 when the Compulsory Education Act was passed by the Habsburg Empire, requiring all children between the ages of six and fourteen to attend public school or pay a fine. While Orthodox parents frequently paid fines in order to send their sons to cheder, girls were often sent to public schools—and since space in the public schools was limited, having their girls attend also allowed some parents to avoid paying the fine entirely. This led to major cultural divergences between Orthodox boys and girls and, consequently, difficult marriages. It also left young, devout women like Schenirer with few peers they could relate to. In November 1917, shortly after establishing Bais Yaakov, she remarked that “one more thing gives me joy: I’m not alone.”

In creating a school, Schenirer formed the kind of creative, adventurous, spiritually-rich environment she seems to have dreamed of as a child. Her diary reveals her deep love and awe of nature, and she sought to cultivate this in her students. On Tu B’Av 1932, members of the Bnos movement (a youth movement associated with Bais Yaakov) reportedly hiked with Schenirer into the woods, where they lit a bonfire, learned Torah, sang and danced. She was an avid reader and sought to establish a robust Jewish literature, beginning with the Bais Yaakov Journal. Schenirer wrote numerous plays that were enthusiastically performed by Bais Yaakov students; these championed the virtues Schenirer sought to instill in her students, rooted in the lessons of Tanach.

This spirited, sincere joy countered the mocking tones of secular Yiddish writers such as Sholem Aleichem, whose self-deprecating humor undermined the idealism inherent in Torah life. Schenirer was often mocked for her piety as a girl; she confided in her diary that she wished to find the courage to confront those who made light of Jewish law. Her forceful denunciation of these attitudes and unflinching defense of basic Jewish principles, combined with the lively, youthful and joyous approach she brought to teaching, continue to guide the institution she founded.

Devorah Goldman is the Tikvah visiting fellow at the Ethics and Public Policy Center.

Reviews in Brief by Gil Student