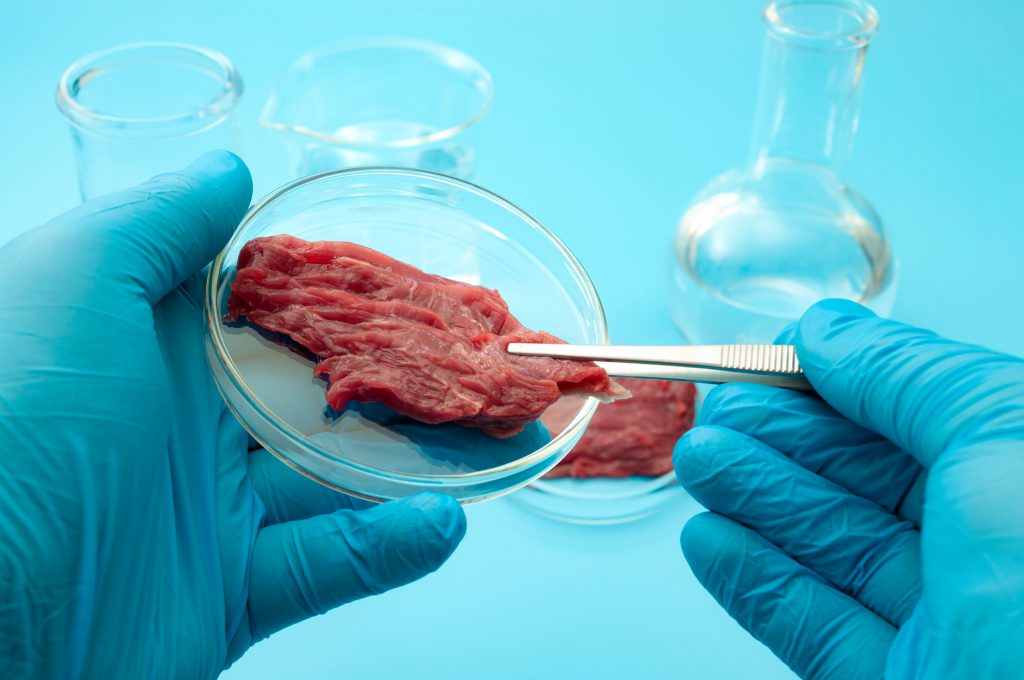 Two decades ago, the food industry heeded growing demand for new sources of sustainable protein and set out to identify substitutes to swap out the meat, chicken and fish on consumers’ dinner plates.

The motivations behind this thrust for change are varied. There is ideology, for example, such as veganism, and concerns about the environmental impact of factory farming. Some take up clean eating for the health benefits. On a broader, non-consumer level, research into non-meat alternatives is part of an effort to tackle global issues of food accessibility and affordability, as well as obesity and hunger.

Today, the alternative meat movement is booming. But fear not. These are not the mushy veggie burgers of yore, a patty assembled from mashed canned green beans or peas.

Startups and well-established companies are now offering a menu of flavorful, affordable options—many of them kosher—that mimic the taste-to-texture experience of eating the real thing. Plant-based hamburger patties are changing the culinary landscape. Burger joints offer them. Gourmet chefs elevate them to high-end cuisine. Cell-based meat, however, which originates with a live animal, has not yet become widely available commercially.

To be clear, alternative meat—whether plant based or cell based—begins in a lab, not a kitchen. Both options are as much about technology as they are about cookery. Both have kashrut implications. And both have the goal of redrawing the picture of how humans eat.

But how does a company go about building an alternative burger?

According to Rabbi Nosson Neuberger, an OU Kosher RC who oversees supervision at several ingredient companies, the process begins with the same genetic modification used in thousands of other products.

“The possibilities of genetic modification are endless,” Rabbi Neuberger observes. “If you take the right organism, tweak its DNA and give it the right feedstock, you can have it produce virtually whatever natural chemical you want.”

Here’s a classic example of how genetic modification (GMO) works:

“We at the OU, through our broad window into the food ingredients industry, see this kind of process being pursued now in a large spectrum of ingredients, from orange flavors to sweeteners to non-dairy whey protein,” says Rabbi Gavriel Price, an RC for the flavors industry. “In each of these cases, the companies producing the ingredient are taking advantage of our knowledge of DNA and the industrial processes that essentially replicate the original plant or agricultural material.”

Rabbi Yitzchok Gutterman, who set up Impossible Foods for certification in 2018, says that heme “is the substance that makes the company’s plant-based burger look and taste almost identical to the real thing without being the real thing.”

Impossible Foods researchers discovered that heme, which gives meat its iron-y, tasty flavor, is also found in soy plants. As in the raspberry example above, they replicate the gene, insert it into a yeast cell that, under very specific industrial conditions, divides and grows through fermentation. Ultimately, it produces enough heme for Impossible Foods to manufacture its Impossible Burger—a burger that contains neither soy nor meat.

An OU Kosher RC and regional director for Latin America, Rabbi Gutterman observes that it is a sign of the expanding market for alternative meat that one of Impossible Food’s biggest clients is Burger King. He also notes that Impossible Chicken is cooked on non-kosher equipment in a separate plant and is, therefore, not OU certified.

A quick point about Impossible Pork. Rabbi Genack points out that the OU chose not to proceed with certification because of the protracted debate surrounding it, not because it was an issue of kashrut. Rabbi Gutterman adds that Impossible Pork was immediately rejected by its halal certifier.

Cell-based meat—also known as cultivated, cultured, synthesized or clean meat—is, like its plant-based counterpart, also produced under lab conditions. But their stories diverge there.

When Rabbi Price first began to unpack the intricacies of meat cultivation, he was amazed. He explains that the process hinges on cell division, which can produce a multicellular organism when the right growth factors are present. This scientific discipline, called tissue engineering, has for decades supported innovations in medicine, like the grafting that allows tissue cells to regrow over a wound. Food companies have only more recently applied the same principles to develop edible tissue that is identical in cellular structure to meat. In the case of lab meat, companies start the process with muscle tissue from an animal—a cow, a chicken, or fish, for example—and then under very specific conditions allow the cells in that tissue to essentially “grow” through cell division. The original muscle tissue can, under these controlled circumstances, yield a significant amount of meat.

To be clear, alternative meat—whether plant based or cell based—begins in a lab, not a kitchen.

Rabbi Price points out that “this ‘meat’ is essentially just a mass of cells. There’s no fat, no sinew, no blood. It lacks the taste and texture of real meat, though it has the potential to be crafted with the right flavoring and know-how.”

From a technological perspective, there is no precedent for this, so OU Kosher has been consulting with its posekim over a multitude of fascinating halachic questions. For example, the process can begin with something akin to a biopsy from a live animal. According to Rabbi Genack, they would then have to decide whether this qualifies as eiver min hachai (eating a limb from a live animal). Similarly, OU posekim need to determine: Is the final product pareve? Is it fleishig?

When the product originates with actual tissue from an animal, bird or fish, the OU has taken the position that the identity of that tissue would carry through to the final product. For that reason, it has stipulated that if a company were interested in developing, for example, a beef product, the original muscle tissue must be obtained from a kosher-slaughtered animal and the process must be performed under OU supervision.

The very first lab-to-table hamburger, which consisted of tens of billions of lab-grown cells, was served in London amid great hoopla in 2013. As reported by Reuters, the 250,000-Euro price tag was underwritten by Google co-founder Sergey Brin.

For now, however, wide-scale commercialization of cultured meat is on the distant horizon. Production costs remain prohibitive, and science cannot yet produce that kind of volume. Singapore is currently the only country where lab-grown chicken is available on a restaurant menu.

Still, investors continue to bank on cultivated meat as the food of the future. According to the Cellular Agriculture Investment Landscape Report, it took five years to reach the $1 billion investment milestone in 2020, an amount that already doubled by 2021.

Dr. Aryé Elfenbein, a cell biologist and cardiologist based in California’s Bay Area, is the co-founder of Wildtype, a cellular agriculture company that produces clean salmon. He spent time with Rabbi Price to elucidate the process of developing cell-cultured fish, which parallels that of cultivating meat.

Everything Wildtype produces originates from the cells harvested from one salmon three and a half years ago. The results are pieces of sashimi, just muscle and fat, which is what you’d get with an order of sushi. “We only grow the parts of the fish that we eat. We don’t produce a whole fish with fins,” Dr. Elfenbein explains. There is zero waste, while about 40 percent of a whole salmon is discarded. Plus, it’s free of mercury, antibiotics, pathogens and microplastics. It is not vegan, however, and anyone with a fish allergy is cautioned not to partake.

While a graduate student in Japan, Dr. Elfenbein became interested in how the heart muscle repairs itself after a heart attack. He was also intrigued by a groundbreaking discovery that stem cells could be created from skin cells, obviating the ethical challenges of gathering them from embryos.

It got him thinking. “We could use our understanding of how cells grow to address myriad problems, including the increasing challenges of sustainability and pervasive contamination of our seafood supply,” he reflected. Together with his Wildtype co-founder Justin Kolbeck, he applied some of the latest medical technologies to alter the paradigm of how we produce seafood, adding that “neither wild-caught nor farmed fish can catch up with worldwide demand. We need a new source.”

Wildtype now awaits word from the FDA to tip the scales into the mainstream market. It already has agreements with several retailers that will move forward once the FDA approval goes through.

Cost remains a hurdle, however. When the company launched about five years ago, the per-pound price was $400,000. They’ve gotten it down to $40–$50 for two pieces of nigiri—still beyond the reach of most consumers. But Dr. Elfenbein’s ambition is to achieve price parity in the coming years. He also envisions a future in which folks might be able to cultivate their own salmon at home.

“Who knows? Maybe cell-cultured fish will become the new bread maker,” he says.

Merri Ukraincik has written for the Forward, the New York Jewish Week, Hevria, the Wisdom Daily, Tabletand other publications, including Jewish Action. She is the author of I Live. Send Help, a history of the Joint Distribution Committee.

Digitalization and What It Means for Kashrut by JA Staff

Don’t Let It Bug You by Barbara Bensoussan