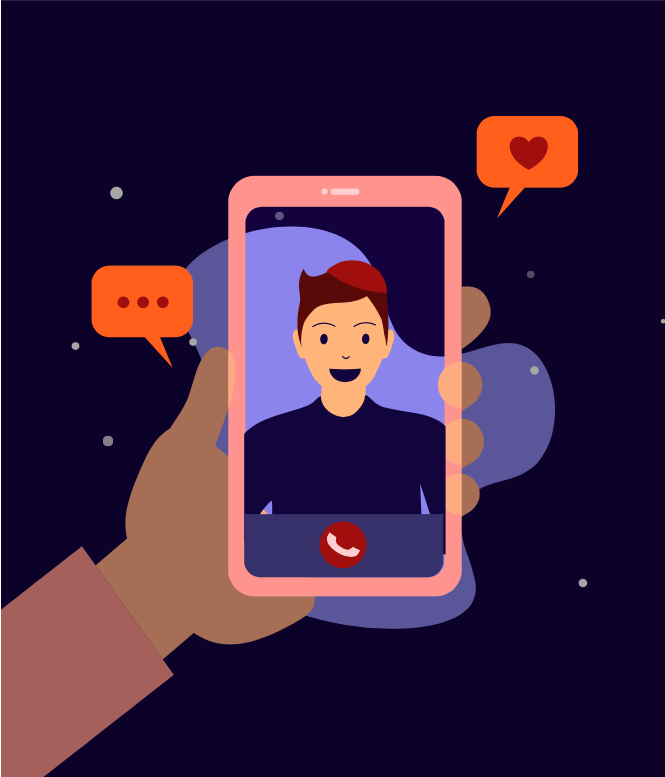 As the pandemic struck, Zoom dating became quite popular in the shidduch world, but singles have different views on whether or not it works.

Greater Connections
By Avi, as told to Rachel Schwartzberg

I’m thirty-one and live in an “out-of-town” community; most of the girls I date are in the New York area. Since I’m in school full-time, I didn’t know if I’d be able to date much during the spring and summer semesters altogether. But when the pandemic hit and flying was restricted, I realized I definitely wouldn’t be able to date, since, with my tight schedule, flying is the only option. And with no one able to travel from New York to the city where I live, I knew I’d have to consider alternatives.

Of course, back then, nobody thought the pandemic would last this long.

In the past, I had spoken to girls over the phone before meeting them in person. So I thought, why not try video conferencing—whether WhatsApp video, Skype, Zoom or a different platform? It’s all in the hands of Hashem, but I have to do my part.

I was speaking to a relative who is a shadchan and she suggested I join “Zoom Room,” (sponsored by Adopt a Shadchan), which I did. The program had about forty guys and forty girls divided into Zoom break-out rooms with groups of four guys and four girls. The guys stayed in their respective Zoom rooms while the girls moved from room to room.

This experience opened my eyes. I met many girls in the Zoom room who had been previously suggested to me. By meeting them this way, I could decide for myself who I wanted to get to know better.

Zoom took away the idea that our dating life had to be put on hold. It was a solution for what we hoped was a temporary nisayon. Our lives were hijacked—what were we going to do?
—Bracha T, twenty-five

The pandemic forced me to be involved in something I otherwise wouldn’t have considered. While I had been open to attending singles’ Shabbatons, to be honest, I tended to avoid them. Participating in a Zoom room is more comfortable than attending a singles event. At an in-person singles event, if there’s no one who clicks with you, you’re stuck there alone for hours. By contrast, a Zoom room was a great way to meet in a group and get things off the ground.

It’s not an issue for me, but I can see how quieter types might have a harder time in a Zoom room—that is drawback. They might not have a chance to get to know anyone in a group setting if others who are louder dominate the conversation.

The Zoom room also had an “after party,” open to anyone who wanted to stay on and have discussions or play games. I’d never done that sort of thing before. I realized it was a chance to get to know people better, in a more casual way. It’s much easier to make connections this way.

I dated two girls I met through Zoom rooms. Neither worked out in the end, but both were good experiences. I dated one girl via phone and video-chatting and I traveled to New York to date the other one.

The Zoom Date
One-on-one video dating is interesting. You still get dressed up if you want and you can build a better emotional connection than over the phone because you get to see the girl in her own space. On my video dates, I have only chatted. But I’ve seen lots of ideas on social media for activities to do or games to play on virtual dates. That would definitely require creativity, but it seems like it could be a lot of fun.

One drawback to video dates is that the connection can be spotty, regardless of which platform you use. It’s hard to get chemistry going when you keep freezing up or losing connection.

Going Forward
Thanks to the pandemic, many people who wouldn’t have thought about dating virtually will be more open to it, creating opportunities for people who may not have connected otherwise. I hope that because of this, we’ll start seeing more diverse matches.

Yes, virtual dating is different than what we are used to and it’s not an end in itself. But it’s a way to broaden your horizons and I’m hopeful it will work and make shidduchim.

Missed Connections
By Leah, as told to Rachel Schwartzberg

I am in my mid-twenties and live in an apartment in Brooklyn with three roommates. During the pandemic, when it became clear I would be working remotely anyway, I left New York and traveled home to stay with my parents in the out-of-town community where I grew up.

From the beginning, when people were very cautious about meeting in person, I was not interested in virtual dating. My friends were doing virtual dating events, but I did not want to participate. Back then, we didn’t know how long this pandemic would last. I thought I would wait it out.

At one point, someone suggested that I meet a guy who lived in a different state, so I relented and we met over Zoom. I found I really wasn’t comfortable with the experience. We ended up traveling to date in person. But if the choice had been to continue on Zoom or to stop dating him, I would have stopped.

I’ve given this a lot of thought, because I myself was surprised that I felt so strongly about not wanting even one more Zoom date with this guy.

What’s so different about meeting in person versus meeting online?

Shadchanim need to decide if Zoom dating is a legitimate form of dating or not. A shadchan will tell me to go on a Zoom date and will list the couples she knows who met over Zoom. Then, after the date, when I get back to the shadchan and say, “I don’t think we are compatible,” she’ll say “How could you know? You only met over Zoom!”
—Rachel Leff, twenty-something

I think it’s the small gestures, like when a guy opens the car door or gets a drink for you. It helps you warm up to someone to see him showing even small acts of caring. It’s not that I need someone to open a door for me, but these little gestures add up. None of this can happen through a screen.

Another way you can get a feel for someone is by observing him. You can learn a lot about a person by observing how he treats a stranger, and how he reacts to things. Your own perception of who he is might not match what you see in real life. When you date virtually, there’s nothing happening so you don’t get to see the guy’s reactions. In real life, there’s just so long people can put up a front. But in a virtual setting, one can theoretically continue that for much longer. (Just look at social media. Everyone’s life is perfect online!) If I were to date online, I’d never be able to feel like I really know the person.

And then there’s the awkwardness. When you’re talking to someone through a screen, there’s nothing going on to help fill in gaps in the conversation. It feels completely contrived; the forced face-to-face conversation feels like you’re conducting an interview. I could probably tell if the guy is completely wrong for me, but I wouldn’t be able to tell if there’s real potential.

A Last Resort
Even talking on the phone is more comfortable than video-chatting. You’re not worried about dressing up or about sitting somewhere appropriate and cleaning up the background.

A friend of mine who was engaged went back to stay with her family during the pandemic. She continued to see her chassan only virtually. In that situation, they were maintaining a relationship from a distance, not trying to create a relationship.

As long as I’m still out of town, I’m being more discerning about potential shidduchim. I won’t pursue a shidduch if it will only be possible (because of the travel restrictions) to date virtually. I would, however, use Zoom as a screening tool before going through the effort of traveling to meet someone in person.

I really think most people prefer dating in person. I think they’ll agree to virtual dating if they feel that they have no choice—like now, because of the pandemic. But in the future, I’m assuming people will abandon virtual dating. We will all be relieved when we can date normally again.

Rachel Schwartzberg works as a writer and editor and lives with her family in Memphis, Tennessee.

Finding a Zivug on Zoom by Merri Ukraincik