Q: I’m elbow-deep in soapy water checking my maror for the Seder, while chatting with a friend on the phone, who tells me that lettuce has no nutritional value. Is that true? If so, why are people always talking about eating more greens?

A: There’s no reason to be bitter about your maror this Pesach season. Lettuce— which grows well in the spring, making it perfect for Chag Ha’Aviv— is actually a catch-all name for a number of different types. The one your friend is probably thinking of is iceberg lettuce. It is a little light in nutritional value, but it’s definitely still good for you. One cup of iceberg lettuce has between 8 and 10 calories, which barely makes a dent in your diet— that’s one reason it’s such a hit among people trying to lose weight. You also get 1 gram of fiber, which contributes to feelings of satiety, and helps control calorie intake. Not to mention about 14 micrograms of vitamin K (about 12 percent of the recommended amount for adults).

If you save some of that maror for salads and have a cup of romaine lettuce instead, for the same 8 calories and 1 gram of fiber you can get about 4100 IU of vitamin A— more than the recommended daily intake amount. Plus you’ll get about 50 micrograms of vitamin K, more than double that of iceberg. You will also get about 60 micrograms of folate, which at 15 percent of recommended intake isn’t too shabby.

Keep in mind, there are other types of lettuce too— like red leaf lettuce, which has about half the vitamin A in romaine (about 2100 IU per cup) and butterhead, which comes in a bit lower at 1800 IU per cup but also contains 40 micrograms
of folate.

So lettuce has plenty of redeeming nutritional value. Moreover, as a popular base for salads, it’s a vehicle for getting even more vegetables into your diet. In fact, lettuce is the third most commonly eaten fresh vegetable in the US, according to the Agricultural Marketing Resource Center. Those green leaves also make a great, low-carb substitute for wraps and sandwich bread, making it ideal for use on Pesach. (Not to mention those pre-Pesach days when the house is already free of chometz and you can’t eat matzah yet.)

But there are many more vegetables that are richer in nutrients than lettuce. So why are nutritionists always promoting green leafy vegetables?

That’s because there is a host of lettuce-like leafy greens that pack an even stronger nutritional punch. Their standout nutrients are vitamins A and K, along with additional health benefits. Take a look: 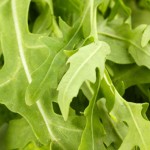 ARUGULA: This peppery-tasting green leaf is from the cruciferous vegetable family, which research has shown may help reduce the risk of certain cancers, including colon, breast, prostate and lung. A cup of arugula provides 5 calories along with 475 IU of vitamin A, about 20 micrograms of vitamin K, and 32 milligrams of calcium. 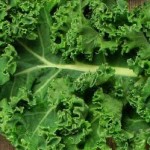 KALE: The vegetable of the decade, no doubt, kale has been increasing in popularity— for good reason. Also a cruciferous vegetable with cancer-protective properties, kale contains lutein and zeaxanthin, two phytonutrients (plant nutrients) thought to be important for eye health, among other benefits. Kale is rich in vitamin A (1600 IU), vitamin K (110 micrograms) and has about 20 milligrams of vitamin C. Maybe its one flaw is that it’s a little annoying to check for bugs because of its curly edges. 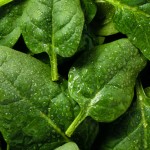 SPINACH: Perhaps spinach was Popeye’s favorite for its content of vitamin A (2800 IU) and vitamin K (145 micrograms). Although it has a nice amount of calcium— thirty milligrams per cup— spinach is also a source of oxalates, which bind to calcium so it’s not well absorbed. However, cooking reduces oxalate content, making that calcium more readily available for absorption by the body. Spinach also contains lutein and zeaxanthin. Stocking your freezer with bags of pre-checked spinach is a no-brainer. 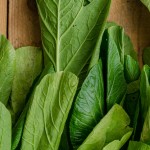 COLLARD GREENS: Kind of like kale, but a bit beefier, collard greens have 1800 IU of vitamin A and about 160 micrograms of vitamin K per cup. They do contain some oxalates, but because you’ll probably cook your collards, you’ll likely absorb much of the 80 milligrams of calcium per cup. 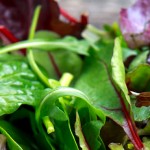 SWISS CHARD: Part of the beet family, Swiss chard has been said to taste like beets. Vitamin K is its star nutrient, with about 300 micrograms per cup. It’s also got 2200 IU of vitamin A and a sprinkle of vitamin C (10 milligrams). Like spinach, it contains oxalates, which bind to calcium, so the 18 milligrams found in a cup probably don’t count. 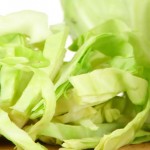 CABBAGE: At 18 calories, a cup of shredded cabbage provides 2 grams of fiber, 25 milligrams of vitamin C, 30 micrograms of folate, and 50 micrograms of vitamin K. It’s fairly easy to incorporate this cruciferous vegetable into your diet, with the proliferation of coleslaw mixes and shredded cabbage available at the supermarket. And I know we’re talking greens here, but if you choose red cabbage which has a similar nutrient profile (a bit more vitamin A, a bit less folate and vitamin K), you’ll also get the addition of anthocyanins, the color pigments that are potent phytochemicals (plant chemicals) thought to have antioxidant and anti-inflammatory properties.

This Pesach, instead of loading up on the carbs, go for a salad!

1. Mix it up. Say you love iceberg lettuce—throw in a handful of spinach or kale to bump up the nutritional quality a bit.

2. Add other vegetables—or any other nutritious food—to bump up the variety of nutrients. For added protein, how about diced
chicken or a bit of shredded cheese? Add crunch—and healthy fat and protein—with chopped nuts.

3. Watch the dressing! You don’t want to undo the health benefits by going overboard on calories with dressing. Sprinkle, don’t souse.

4. Don’t skimp on the greens. If you’re aiming for more veggies, it’s going to take two cups of lettuce to equal one vegetable serving.

5. Balance the bitter. An acidic dressing (for example, one made with lemon or lime juice) may make a bitter green more appealing. Another idea—add cut up fruit to boost sweetness.

Shira Isenberg is a registered dietitian and writer in Memphis, Tennessee. She has a master’s degree in public health nutrition from Hunter College in New York.