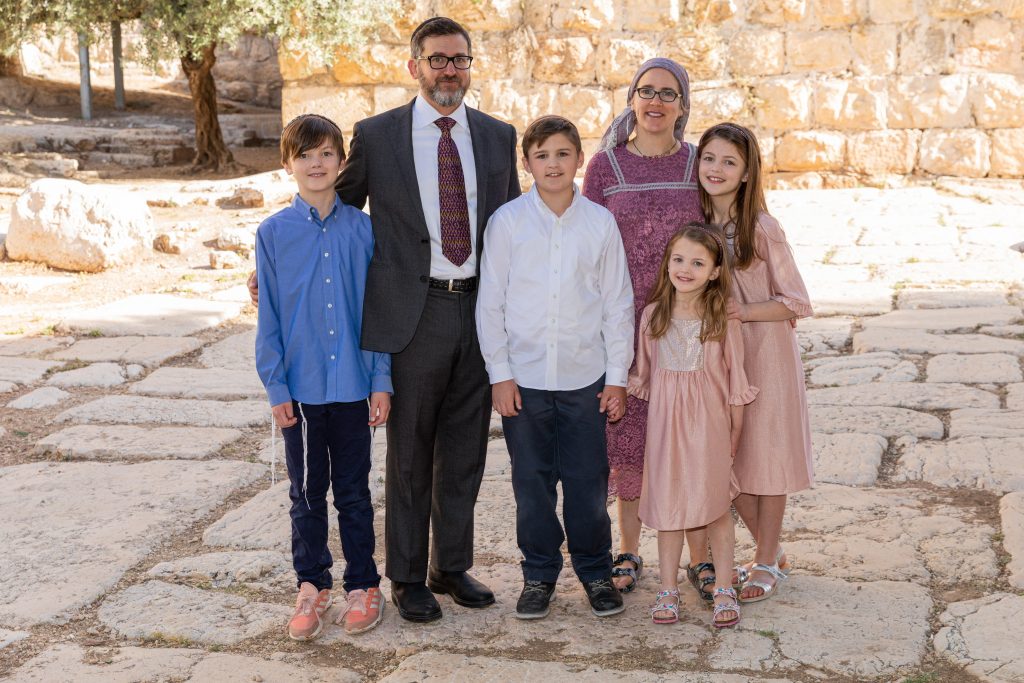 The Rosenblatts moved to Jerusalem from Montreal in October 2020.

By the Rosenblatts, as told to Aviva Engel

We talked about aliyah since we got married; it was always our plan. Not long before our move from Montreal to Jerusalem in October 2020, we had built a house. Jason told the kids, “The house has to be in perfect order because we’re selling it!” From day one, we knew we would sell it in the short term and make aliyah. Our approach was—either we can wait and retire in Israel, or we can live in Israel. We chose to live there.

The pandemic didn’t discourage us from making aliyah; we’re freelancers. We’re both musicians. I [Rachel] play trombone; my background is classical. Jason sings, plays keyboard and harmonica and composes music, mostly jazz and blues. We specialize in Eastern European Jewish and Chassidic music as well as Carlebach.

We were going to have to rebuild our client base due to the pandemic, regardless. We figured we might as well restart in Israel rather than delay our plans indefinitely. Our kids, Hallel, Bezalel, Priel and Annaelle, were just at that threshold—twelve, ten, eight and six years old—where it made sense.

Only seventeen out of the 100 people on our flight to Israel were making aliyah. When we arrived, we were warmly welcomed by Jason’s brothers, who have lived here for over ten years. Because of Covid, we did not experience the typical Nefesh B’Nefesh ceremony, but it was still very emotional, and we have our own special memory of our arrival.

Our children have adjusted very well overall, and they’ve made really nice friends at their school in the Armon Hanatziv neighborhood in Jerusalem. They’re also reconnecting with their cousins, whom they knew remotely over the years. We’ve made a lot of friends too, and career-wise we couldn’t be happier! We got a gig through the Jerusalem Municipality the first week we were here, and it was a nice introduction to Israel. We had also stayed in touch with a lot of Israeli musicians over Facebook, and as soon as we arrived, they hired us and connected us with others. In Canada, we had almost exclusively played together; here there are a lot more opportunities for us as musicians to pursue our specialties independently.

In Israel, you have to develop a bit of a thicker skin and learn to take things in stride. People’s mannerisms are different. There’s no guessing what someone thinks; native Israelis are more direct than what we’re accustomed to. But because it’s a social culture, if someone really needs assistance, Israelis are more than eager to offer it.

Since we arrived, we’ve asked ourselves a few times, “Why didn’t we do this earlier? Why didn’t we do this before we had kids?” When you hear “Chag Same’ach” on the rock radio station and people talking about Purim in the media—it’s crazy! Why would anyone live anywhere else? 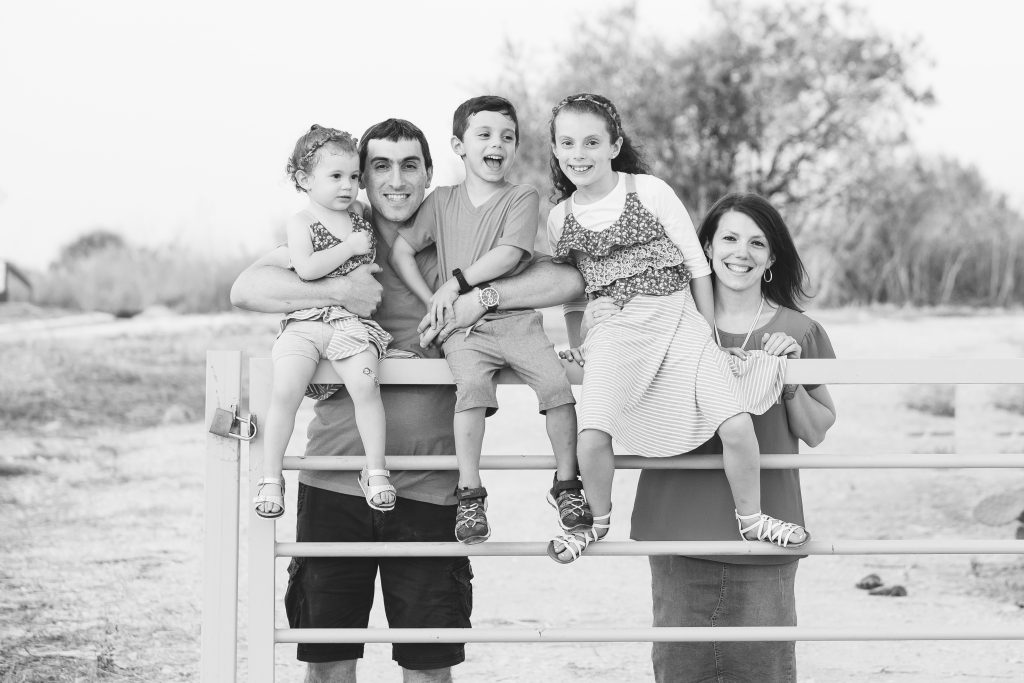 The Heilmans made aliyah during the pandemic and currently live in Modiin. Seen here at the Titora National Park in Modiin, Israel.

By the Heilmans, as told to Aviva Engel

We made aliyah from Silver Spring, Maryland, with our three children, Reut, eleven; Yaniv, seven, and Eden, four, on July 9, 2020—the day before our fifteenth wedding anniversary.

Our aliyah story is a long and complicated one: my family [Yoni] went back and forth between New York and Israel for most of my childhood. When I met Gabrielle, she shared my dream of living in Israel.

We officially made aliyah in 2009 when we were expecting Reut. After three years, we returned to the US as I had a scholarship to go to business school. We hoped that life would bring us back to Israel, and we planned for it. Our arrival last summer was the coming to fruition of all of that. Today we live in the Kaiser neighborhood of Modiin.

We finalized our return plans in the early winter of 2020, pre-coronavirus. Things were already in motion when the pandemic hit. Although aliyah flights were on hold for a time, we were able to travel to Israel since we had Israeli citizenship from our previous move. Because Nefesh B’Nefesh had already helped us in the past, we were on our own this time in terms of booking flights and making arrangements.

Initially it seemed like we had made a brilliant decision to make aliyah during Covid since Israel had tackled the first wave really well. When the second wave hit, we didn’t know whether there would be flights or how safe it would be to fly if we could. We also wondered whether we’d be able to find an apartment. I had planned to go to Israel to find a place in the spring, but that was no longer possible. There was a lot of uncertainty, and many people said, “You’re nuts to go!”

We briefly considered postponing our plans but staying was also risky because our lease was up and somebody else was moving in; regardless, we had to move. We reasoned that we had planned our aliyah for a while and nobody knew what tomorrow was going to bring with this whole Covid mess. So we forged ahead.

Aside from the typical moving challenges, the months leading up to our big move were nothing like we had anticipated. You imagine you’ll see everybody, spend time together and have goodbye meals or picnics, but because of Covid, there were four months before we left when we couldn’t see anybody. We held drive-by goodbyes for our kids, which were very emotional. There were a lot of people we would have liked to hug goodbye, and we just didn’t have the chance.

We have family in Israel, including my parents who made aliyah after us in August. They had an apartment in Israel where we quarantined upon our arrival, and we also found a long-term rental in Modiin, which was a huge blessing.

Prior to our departure, we gathered whatever information we could, both from our community in Silver Spring and from people in Israel whom we had made connections with, knowing that up until we boarded the plane, there was no guarantee that things were going to move ahead. On July 9, we walked into the huge international terminal at JFK Airport and it was like a ghost town! There were two flights—one was ours, the other was heading to Paris. In Silver Spring, we were extremely cautious about Covid, so the fact that we were getting on a plane and going anywhere was hard to digest. But we took extraordinary safety measures for the flight.

Our arrival to the community was also atypical because of the pandemic. When you get to a new place, you want to explore and meet people. You want to go to shul and eat out. But in the beginning, we couldn’t do any of those things. When I finally went to shul for the first time in fourteen months, people asked if I was new. I said, “Yes, but I’ve been living here for seven months.”

Integration during Covid moves at a snail’s pace. Currently I’m working from home. I run TAMID Group, a nonprofit focused primarily on making sure that the next generation is connected to Israel. We operate mostly on US college campuses, using students’ career interests as a vehicle to connect them to Israeli entrepreneurs, companies and this place we call “home.” Gabrielle is an advanced-degree fertility nurse but has to go through a relicensing process in order to be able to work here.

Our kids were in and out of school. Thankfully, their Hebrew is pretty decent as we often spoke Hebrew to them at home. That being said, for our son to start Kitah Aleph in a foreign language, in a new school, largely over Zoom, was definitely challenging, as it was for our daughter in fifth grade. You hear about “Zoom fatigue,” but it was exacerbated by the language gap. Their teachers have been really wonderful and worked with us to do what they could, but what the kids were really missing was recess and the chance to integrate with peers and make friends. For a while, parks were also off limits.

Culturally, things are obviously different here, as we expected. No one has reusable masks because in Israel there was never a shortage of surgical masks, but we appeared to be wearing fancy masks when it was all we could get in America! And social distancing never caught on here. That was very hard for us; where we had come from, people were being very, very careful. And then we got here, and we thought, is this the same pandemic?! Waiting in a crowded line at the mall at Misrad Hapnim was a weird experience. There were marks on the floor where people were supposed to stand, but in typical Israeli fashion, nobody was paying attention! On the flipside, it’s quite poignant to stand on your porch at the end of Neilah and hear the shofar sounding from all of the outdoor minyanim around the city.

I hesitate to paint things in absolute terms, but it does feel like we gambled on the right country. Life is rapidly returning to normal here. And at the end of the day, when we look outside, we are where we want to be.

All Because of Covid by JA Staff