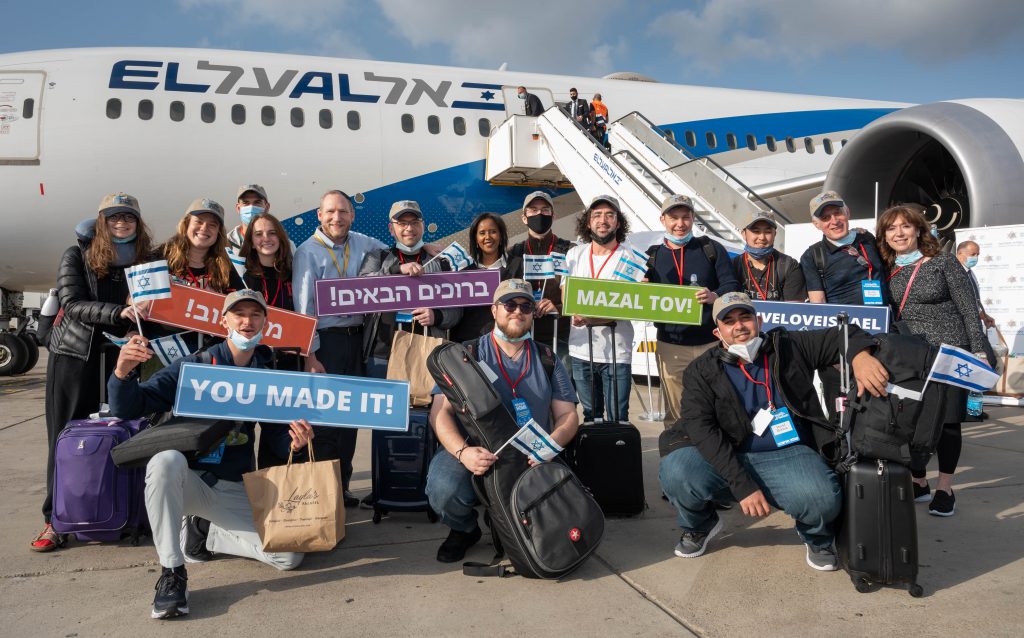 New olim arriving in Israel during April 2021. In the back row are Nefesh B’Nefesh Co-Founder and Executive Director Rabbi Yehoshua Faas (fifth from the left) and Israeli Minister of Aliyah and Integration Penina Tamano-Shata (seventh from the left). Photo: Shahar Azran

Covid-19 has spurred an unprecedented interest in aliyah. Why?

Rabbi Naftoli Eisemann, former administrator of a kashrut organization in Philadelphia, Pennsylvania, says he first considered making aliyah sixteen years ago. But he didn’t make the move to Israel right away. Esther Williams, who grew up in “a very Zionist home” in Brooklyn, New York, began to think about aliyah more than three decades ago. She, too, did not settle in Israel immediately. And Uriel Eckmann, a native of Chicago who worked for a data security organization in northern New Jersey, first thought of aliyah a decade ago, while taking part in his high school’s visit to New York City. He was impressed by the intensely Jewish character of the neighborhoods he saw for the first time, and decided he wanted to experience that feeling on a daily basis. He felt “the only place I could do that is Israel.” Eckmann as well did not make aliyah immediately. For family and career reasons, all three delayed their plans to settle in Israel.

Then came the pandemic. And all moved to Israel.

The Eisemann, Williams and Eckmann families are part of a counterintuitive trend that has taken place in the last year and a half in which an unforeseen number of Jews from the United States and Canada realized their dreams of making their home in the Jewish homeland, either because of or despite the Covid-19 pandemic that left many people isolated and countless offices and workplaces closed. “It’s too early to tell” the long-range effect of the pandemic on aliyah,” says Rabbi Dr. Avidan Milevsky, associate professor of psychology and a researcher at Ariel University in Israel who has investigated the subject of aliyah. But it looks like the pandemic will prove to be a boon for aliyah, which he and other experts did not foresee. “Based on previous sociological research on aliyah trends, I didn’t expect it [the pandemic] to make any major change” in aliyah figures, says Rabbi Dr. Milevsky, who is also a psychotherapist. “It’s definitely a surprise.”

While overall aliyah figures in fact decreased by nearly 40 percent in 2020, largely attributable to the worldwide pandemic, some 5,000 North American olim are expected in 2021, a 42 percent increase over the annual average. “There was so much uncertainty that I would not have anticipated this,” says Marc Rosenberg, vice president of Diaspora Partnerships at Nefesh B’Nefesh, the nonprofit agency that works in partnership with Israel’s Ministry of Aliyah and Integration, the Jewish Agency, Keren Kayemeth LeIsrael and the Jewish National Fund-USA. Rosenberg adds that college students’ participation in gap-year study programs in Israel also increased during the pandemic. As of this writing in early August, some 2,000 North American olim on forty Nefesh B’Nefesh group flights are expected to arrive in Israel by the end of the summer.

Moreover, more than 18,000 aliyah applications have been opened by Nefesh B’Nefesh, indicating historically high levels of interest in aliyah. However, Rosenberg says, it may take until sometime in 2022 to determine if that interest translates into actual immigration to Israel.

Among North American arrivals in 2020, the majority were young couples and young families, including 794 children. However, there were also 1,032 unmarried adults; 332 retirees; 390 lone soldiers; and 32 women registered to do national service. The immigrants themselves, who included educators, physicians, nurses, social workers and lawyers, ranged in age from 3 to 97, with an average age of 30.

Yaakov Greenspan, author of Just Get on That Plane, a recently published paperback and e-book about the importance of making aliyah, says he was “not at all surprised” by the jump in aliyah last year. “The pandemic has shown the Jewish Diaspora the obvious: the writing is on the wall regarding their continued existence in the Diaspora,” he asserts. “Israel’s outstanding response to the pandemic has encouraged many who were on the fence to make the bold move. It is always a good time to come to Israel, of course. But this is a particular juncture at which the community here could use fortification.”

Some 5,000 North American olim are expected in 2021, a 42 percent increase over the average annual.

This phenomenon pertains especially to the Orthodox community, which represents a disproportionate amount of the North American Jews who make aliyah. According to Nefesh B’Nefesh, about 65 percent of the families who make aliyah identify themselves as Orthodox; the percentage is reversed for younger singles who make aliyah, but families, because of their larger numbers, which typically include several children, represent the majority of olim from North America.

Why the increased interest in aliyah? Potential olim, working remotely and separated for extended periods from family members, saw that life conducted online was feasible. Distance did not matter as long as a computer or smartphone was at hand. “That was the biggest factor,” says Rosenberg.

Also, say experts, the inability to visit Israel for long stretches of time caused many to rethink their priorities and their relationship with the Jewish state.

“We finally had the ability to leave; the pandemic simplified it,” says Eckmann, who moved to Jerusalem’s Nachlaot neighborhood with his wife. “If not now, when?” he asked himself.

On the other hand, “the pandemic posed a logistical challenge” for people seeking to make aliyah, Rosenberg adds. “It was more difficult to get documents” from closed offices, or to attend pre-aliyah seminars or interview sessions during what is typically a nine-month process. Instead, “everything was virtual.”

Another difference was that there were no mass aliyah flights; instead, people making the move did it in small groups when the borders to Israel were open, and they were often the sole olim on their flights. Nefesh B’Nefesh made no special public relations pitch to attract people during the pandemic, he says—Israel sold itself. (One organization that did earmark Orthodox immigrants was “Bring Them Home” [itstimetoleave.com].)

If the changing circumstances of the pandemic did not make clear the viability of aliyah, “we’re missing the message,” states Rabbi Scott Berman, who was head of school at a Modern Orthodox high school in Detroit and now lives in Modi’in and works as a consultant. He was quarantined for his first two weeks in Israel. “I could be isolated in the United States. I could be isolated in Israel,” he said.

Other reasons for the increase in aliyah included the feeling that the level of anti-Semitism in the US was going up, and a desire to receive Israeli citizenship, which made people eligible for the “rescue flights” from abroad that were available only to Israeli citizens. (During the pandemic, when international flights were canceled in many countries, Israel sent a number of rescue flights to bring home hundreds of Israelis who were stranded in several countries.)

Williams, previously a frequent traveler, says Israeli citizenship was her motivation for going through with her decision to finally make aliyah; during the pandemic she was eligible to continue visiting her children who still live in the States. ”I’m not your typical olah [immigrant],” she concedes. “I live at the airport.” But, she added, when she returns to Israel these days, “I’m going home to my own country.”

All Because of Covid by JA Staff