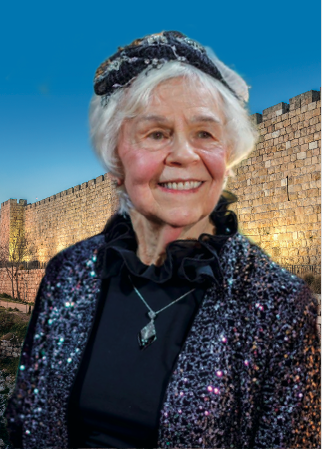 At the age of ninety and in the midst of the pandemic, in August 2020, Nelly Grussgott made aliyah from Brooklyn.

For ninety-year-old Nelly Grussgott, Covid was a godsend.

It is indeed only because of the pandemic that the Berlin-born nonagenarian, who is a great-grandmother many times over, finds herself living in Mitzpe Netofa, a scenic religious yishuv near Tiberias.

Back in February 2020, Grussgott, a Holocaust survivor who was living in the Flatbush section of Brooklyn, decided she could no longer remain in a large house by herself. Together with her four children, two of whom live in the States, she made the decision to move into an independent living facility nearby. The facility told her she could move in on March 1. “That’s too soon,” Grussgott said. They decided on March 15.

But it was not meant to be. “Between March 1 and March 15, the whole world turned upside down,” says Grussgott’s daughter Dina, who lives in Mitzpe Netofa. Shortly before her mom was scheduled to move to the assisted living center, Dina began feeling frantic. Even though it was early on in the pandemic, she realized the severity of the situation. “Mom,” she said over the phone, “you can’t move there. It’s too dangerous.” Grussgott was unsure. How could she back out of the commitment she had made? She called the facility and was promptly told that new policies were now in place: no family visitors were being allowed in. That sealed her decision. Grussgott decided not to move.

Then Dina had an idea. She knew that the owner of a house near her, an epidemiologist, had just gone to the States. She called him and was promptly offered the opportunity to rent the house. “Mom, there’s a house three doors away from me in the yishuv that’s available! Come to Israel,” she pleaded. The fact that the house was available for rent was remarkable in and of itself. “This is a very desirable community,” explains Dina. “There’s a waiting list just to get a caravan. Hashem was pushing my mother here.”

Incidentally, just that week, a news article appeared about an overwhelmed Brooklyn funeral home in Grussgott’s neighborhood where dozens of bodies were found decomposing. Dina insisted that her mother would be much safer in Israel. Since Grussgott had her daughter Dina as well as a son and grandchildren and great-grandchildren living in Israel, she finally consented. “A house so close to my daughter! It was an offer I couldn’t refuse,” she says.

But that was only the beginning. Now the paperwork had to get done—which proved to be a significant challenge. The Misrad Hapnim, Israel’s Ministry of Interior, required Grussgott’s birth certificate from Berlin, among other unobtainable documents. Dina spent four months “doing nothing else” but trying to figure out how to satisfy all the regulations. The situation looked bleak when they suddenly experienced remarkable siyata d’Shmaya. In desperation, Dina decided to look around for a connection at the Ministry of Interior. To her disbelief, she discovered that her son, who was in the IDF at the time, was working closely with the Misrad Hapnim and had close contacts there. With her new connections, the requirement for the various documents was simply waived. “Just choose the flight,” she was told.

“Mom, there’s a house three doors away from me in the yishuv that’s available! Come to Israel,” she pleaded.

On August 20, 2020, Nelly Grussgott arrived in Israel on one of the few planes still flying there. “I was told that because of Covid, no one would be at the airport to greet me,” says Grussgott in her easygoing, cheerful manner. “I said, ‘That’s okay, I’ll take a taxi.’ But when I got off the plane, I saw some people from a distance [across the otherwise empty airport].” To her shock, she recognized them. “They were my grandchildren and great-grandchildren!” With her family members hugging her through a plastic shower curtain to ensure corona precautious were in place and her grandson, who is a musician, playing music, they formed a joyous welcoming committee at Ben-Gurion Airport.

A touching video of the scene went viral, with Israeli politician Dov Lipman posting it on Twitter and media personality Sivan Rahav-Meir publicizing it as well. “My mother became a celebrity,” says Dina.

At the age of ninety, Nelly Grussgott made Israel her home. Her children, grandchildren and great-grandchildren are in and out of her house all day long. “Making aliyah has exceeded my expectations. I love being in Israel,” she says. “And it’s all because of Covid.”

5 3 votes
Article Rating
This article was featured in the Fall 2021 issue of Jewish Action.