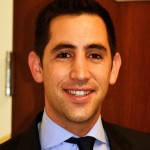 Yedidya Harush’s seventeenth birthday was not a happy one. It was the day the people of the Gush Katif settlement of Atzmona were forced to leave their homes. Today Yedidya is twenty-six years old, married to Shiran, who teaches Hebrew to new immigrants, and has a two-year-old girl named Avigayil. Yedidya is the JNF (Jewish National Fund) Halutza liaison for Negev community development, and in that capacity travels and lectures widely in the US.

I was born and grew up in Atzmona, the third of seven children. My father was a lieutenant colonel in the military rabbinate and was the rabbi of the Eilat region. My mother taught in the local elementary school in Gush Katif.

Life was great in Atzmona, and in Gush Katif in general. We felt like it was the best place to live. It wasn’t easy at times, having to deal with rocket and terror attacks and having to go to funerals of friends and relatives [the victims of terror attacks]. But we knew we were there for a reason and we were so happy to live there. I went to school in Gush Katif. We spent a lot of time going to the beach and playing outdoors.

The disengagement was very, very difficult. It was hard to say goodbye to my memories, my childhood. I remember standing in front of my home, holding the key, watching the bulldozer knock the house down. Three hours later it was flat. Everything was gone.

On the day of the disengagement, I hid in the greenhouses, and I stayed [even after everyone had left]. Nobody carried me out; I left myself. I didn’t want anybody to carry me out; that’s not who I am. [The rest of the community had gathered for final prayers in the synagogue and then got on buses to evacuate.]

I felt empty and lonely. When I walked around, after everyone had left, I felt like a stranger, like it wasn’t my home anymore.

When we exited the gates of Gush Katif, we had a choice to make: either we choose to remain angry and say, “We are no longer part of this country,” or we choose to still believe in the Land of Israel and be part of it.

On our way out
I sat backwards
Gazing at the sea
And the flowing sand
I tried to wave goodbye
I tried to wake up
And see
It was just a dream.

[After the disengagement, some of the residents of Atzmona erected a tent city known as “City of Faith” on the outskirts of the southern town of Netivot. Some of the young people there gathered together at a zula, a hangout.] The boys in the zula were very angry. They had a lot of hostility toward the leadership of Atzmona because they felt that they were not radical enough [in their response to the situation].

Following the disengagement, many boys and girls from Gush Katif were on the streets. Several of them relocated to different schools; a few got into drugs and suffered from serious psychological difficulties. Eventually many of them pulled their lives together, but not all of them did. Some of them are still living on the streets. They are living in the past. I don’t blame them. 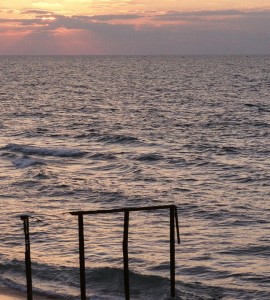 The beach in Gush Katif.
Courtesy of the Israel Government Press Office/Mark Neyman

Unfortunately, after the evacuation, I didn’t have a school to go to, because my school had been in Gush Katif. But I was very fortunate to receive a scholarship through [famous Israeli basketball star] Tal Brody to attend a yeshivah in Highland Park, New Jersey, with two other friends, for our last two years of high school. The week before my family moved to what became their temporary house for the next seven years in Yad Binyamin, I flew to the States.

When people would ask me how my parents could continue to build despite the impending disengagement, I would reply, “When you have a relative sick in the hospital, you don’t prepare his funeral. You do everything you can to make him healthy again.”

The ducks we had in our yard
We took with us to the bus
But the driver didn’t agree
[To take them]
Now I heard on the radio
That someone is looking for a home for them.

I wanted to ask
That someone write down their address
So when we have a home of our own,
They can return to us.

I remember standing in front of my home, holding the key, watching the bulldozer knock the house down. Three hours later it was flat. Everything was gone.

We continued to believe; we gave a lot of people strength. My mom says she would do the same thing all over again—build that new house again. It was a lot more than bricks and concrete. Yes, my parents did lose a lot of money and had to take out another mortgage. They were compensated for only 60 percent of what they lost. And eight years later, when they were building their new home in Yad Binyamin, land was much more expensive, so they had to take out a half-million-shekel mortgage.

I felt a little apprehensive about leaving my country and what used to be my home; I had never really left Gush Katif before. We lived in a bubble, and for us, America was a dream. But meeting the American Jewish community was an amazing experience and provided a soft landing after what I’d been through. I learned about Zionism from American Jews, seeing how they look up to our country and how they appreciate it. They helped me rebuild my life. 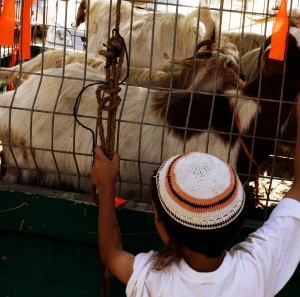 A child from Atzmona takes a last look at the goat pen in the settlement shortly before the evacuation begins. Courtesy of the Israel Government Press Office/Mark Neyman

When I returned to Israel, I became a paratrooper in the IDF. After serving in the army, I was about to start law school when I got a phone call from my [former] community [members] asking for my help. I didn’t think twice before saying yes; I wanted to do something more meaningful than law school, which could wait. Some of the members of my former community of Atzmona had relocated to the Halutza area. [Founded in 2005 by a small group of families evacuated from the Gush Katif communities of Atzmona and Netzarim during Israel’s disengagement from Gaza, Halutza is located in the northwest Negev on Israel’s borders with Egypt and Gaza. It is composed of three communities: Naveh (families transplanted from Atzmona); B’nei Netzarim (families transplanted from Netzarim) and Shlomit (a new community). This desert area, which had never been inhabited or farmed, is now a rapidly expanding agricultural region that is attracting new residents throughout Israel. Today there are 250 families; their goal is to reach 2,400.] 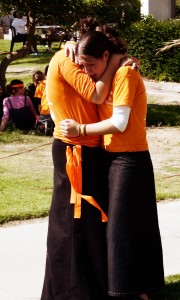 I work with the Halutza community and the JNF to help build communities and synagogues, kindergartens and medical centers. I am building Israel; giving back to my country.

After the disengagement, my father continued to work for the military rabbinate and became the second-in-command in the southern area. He retired about three years ago. My mother opened a school in Yad Binyamin.

We may have challenges in Israel, but at the end of the day, it’s our only country. There are approximately 14 million Jews around the world, and Israel is their only homeland. God forbid, if anything happens tomorrow, to Jews anywhere in the world, these Jews can get on the first plane out and come to Israel.

Today when I fly to the States to speak on behalf of Halutza and JNF, I recharge my Zionist batteries in the Jewish communities in America. Any Jew—religious or not—involved in building the State of Israel gives me strength. [Because of them,] I can go back and say to the people of Halutza, “We’re not alone.”