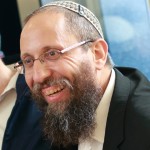 Gush Katif was an agricultural success story beyond anyone’s dreams.

But following the disengagement in 2005, hundreds of businesses were wiped out and unemployment among the evacuees was rampant. The almost 10,000 people of Gush Katif and the Northern Shomron were suddenly left with nowhere to live and nowhere to go to work in the morning.

In the days and weeks immediately following the evacuation, Rabbi Yosef Zvi Rimon, community rav of Alon Shvut, and some of the members of his community, went to visit the uprooted residents of Gush Katif. They went from hotel to hotel to see how the evacuees were faring. Looking at their shattered lives, Rav Rimon tried to pinpoint how they could be most helpful. “We asked ourselves, “‘What is most needed?’”

“I saw immediately that things were not organized; there were no [provisions] for doing laundry or for dealing with other basic necessities, but the Minhelet Sela [government body created to take care of the evacuees] said the residents would only be in the hotels for twelve days. In the end, it was three to six months,” he says.

Problems abounded. Little children had nothing to do during the day; no arrangements had been made for day care programs. “They didn’t have enough toys or activities,” says Rav Rimon.

Of course, the biggest challenge proved to be finding employment. “The lack of employment was causing emotional difficulties. Eighty-five percent of the residents had been employed in Gush Katif and all of a sudden they were out of work; I saw that that was the largest problem but no one was taking care of it.”

Rav Rimon met with the officials of Minhelet Sela and of the Ministry of Industry, Trade and Labor. “They said, ‘How can we organize work if we don’t know where they’ll live?’ I replied, ‘But how many months can they be here without work?’ They asked, ‘What do you suggest?’ I responded, ‘Give them temporary jobs.’ They countered, ‘How will we find those?’”

Realizing that Sukkot was coming up, Rav Rimon called Sukkot Yerushalayim, a major sukkah manufacturer, and asked if they needed workers for the upcoming holiday. “Of course!” they said. In one day he found work for seventeen people.

“I saw how the light returned to their eyes. And then I realized there was no choice; I had to do [something about the situation] myself,” Rav Rimon says.

Rav Rimon gathered 150 volunteers from all over the country. They looked for jobs and learned how to write resumes. Then they set out to assist the evacuees from Gush Katif.

“At first we worked out of my house, until I saw it was too much,” says Rav Rimon.

Eventually, JobKatif, as it became known, moved into the offices of IDT, the giant telecommunications company run by Howard Jonas at the time, who generously donated space to the program for four years.

Certain subgroups were harder to employ than others. “Some evacuees were over forty-five, or had no college degree,” says Rav Rimon.

He decided to help them set up their own small businesses. “A few years ago, the government ombudsman did research and discovered something amazing. Statistically, 80 percent of new businesses fail in the first eighteen months, but 94 percent of the businesses we helped get off the ground succeeded. [This is because] we accompanied the owners throughout the process,” Rav Rimon explains. “It is not enough just to find work for people. Some of them needed to learn new [skills or professions]. In Gush Katif, many of them worked in agriculture or security; we had to determine [which fields they could retrain in and see] what was the most appropriate for them.”

Rav Rimon tells a story: A husband and wife worked in the moetza (local municipality of Gush Katif) and after the expulsion they were both unemployed for three years. Noting that the husband had a talent for cooking, JobKatif helped him start a catering company, offering both financial aid and professional advice. It also provided funds so that his wife could study in the nursing program at Shaare Zedek Medical Center. 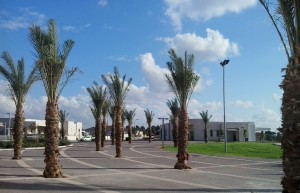 An area in the rebuilt Netzer Hazani. A social hall in the background is dedicated to the memory of Itamar Yefet, h”yd. Yefet, a resident of Netzer Hazani, was murdered in a terrorist attack in 2000.
Photo: Toby Klein Greenwald

“A number of months ago,” says Rav Rimon, “I was at an event and the food was especially delicious, so I went to see who the caterer was, to thank him. He said to me, ‘Rav Rimon, don’t you recognize me? You were the one who helped me start this company. We didn’t have work; people even brought us food for Shabbat—that was how bad our situation was. It was so hard psychologically for me. And you helped me open this catering business and enabled my wife to go to school. I paid off all my debts and my wife is now a nurse. We work, we stand on our own two feet, we have no debts and it is in your zechut.’”

In addition to serving as chairman of JobKatif, Rav Rimon is the founder and chairman of the Halacha Education Center, which develops innovative educational curricula for Jewish studies in Israel. Rav Rimon is also a faculty member of Yeshivat Har Etzion and Midreshet Migdal Oz. He also writes extensively on Talmudic and halachic issues.

Rav Rimon says that while there are 380 evacuees from Gush Katif who still need jobs, he doesn’t see JobKatif lasting too much longer in its current form. “One year from today, we’ll close JobKatif. Our prediction is that in one year, the level of unemployment among those expelled from Gush Katif will be at 6 percent, like it is all over Israel, and at that point we will become ‘JobIsrael’ and will work [to assist all Israelis].”

Looking to the future, Rav Rimon has begun a pilot program geared to help Ethiopian women become nurses. Noting that the key barrier to their acceptance into Israel’s nursing schools is the culturally biased psychometric exam, JobKatif began assisting Ethiopian women gain entry into nursing programs by offering one-on-one tutoring and enrichment courses. “We’re creating a real revolution,” says Rav Rimon. “We’ll try to help as many people as we can and create real change in the State of Israel.”

More than a year ago, Rav Rimon gave a talk at a religious all-girls’ school on Shabbat. At the end of the talk, a few girls came over to thank him.

“There was one girl in the tenth grade who waited until everyone left, and then she came up to me and said, ‘Rav Rimon, I want to say a huge thank you. You saved my family.’ ‘How did I save them?’ I asked. She said, ‘I am from Gush Katif, and after the expulsion, my father and mother lost their jobs and they were at home for a number of years, doing nothing. They began to fight with each other, and then one day they said they were going to get divorced. I was so sad. And then suddenly JobKatif came and helped my parents find work; they didn’t just find them jobs, they also encouraged them. A few weeks later, things began to get better. My father and mother began to be happy again and everything went back to normal. It’s been a number of years since then; they never spoke about divorce again, and I wonder, was it a nightmare or reality? Thank you for saving my family.’ I heard that and I said to myself, ‘It was all worth it just for this family.’”

The new synagogue in the rebuilt community of Netzer Hazani. Called “Or Yitzhak,” the synagogue was built in memory of Rav Yitzhak Arama who was murdered by terrorists in 2002 at the age of forty. Rabbi Arama had been the rabbi of Netzer Hazani in Gush Katif. The trees in front were transplanted at great expense from Netzer Hazani and Gdid in Gush Katif, on the condition that one day they be returned to Nachalat Shevet Yehuda in Gaza. Photo: Toby Klein Greenwald