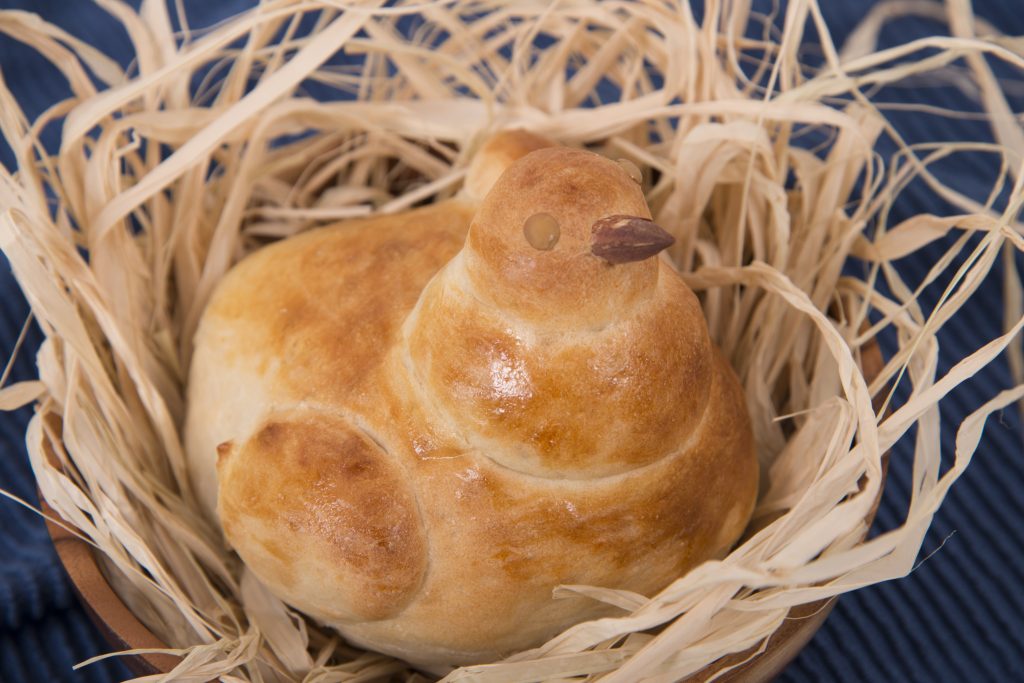 How did our shtetl foremothers make their Rosh Hashanah meals memorable? Not with Instagram-worthy floral centerpieces, chargers, runners or tablescapes. Lacking these twenty-first-century “essentials,” they turned to something else—challahs sculpted into shapes echoing the themes of the New Year.

This tradition, perhaps the ultimate spiritualization of the physical, reached its greatest flowering in Ukraine, the homeland of the Chassidic movement, where women, inspired by the Torah, created memorable loaves.

Round challot are the quintessential Rosh Hashanah and yom tov challot baked in Jewish homes and bakeries everywhere. Why round loaves? Far easier to shape than braids, these loaves symbolize long life as well as Hashem’s Oneness and Unity.

Back in ancient Egypt, the non-Jews fashioned their loaves into the shape of their deities. According to Rabbi Abraham Isaac Sperling, a nineteenth-century Polish scholar (author of the Ta’amei Haminhagim U’mekorei Hadinim, the authoritative work on Jewish customs), our tradition of round breads, both challot and matzot, developed as an alternative. He cites the Mahari Asad, who points out that “ugot matzot,” the Torah’s name for the unleavened bread baked on the way out of Egypt, shares a Hebrew root with the word igul, which means circle.1 Round challot also allude to a verse in Yeshayah,2 which declares that Hashem “sits above the circle of the earth.”

Since the central theme of Rosh Hashanah is Hashem’s kingship, it’s traditional to fashion round challot to resemble crowns. And since Hashem loves us and desires only good for us, we make these challot sweet.

Some home bakers fashion the crowns in the shape of a pomegranate, which contains 613 seeds, a reminder of the taryag mitzvot.

Use the Single Challah Recipe listed at the bottom of this article. Form the dough into a ball, setting aside two golf-ball-sized pieces. Divide these pieces into six balls, and place them in the pan around the larger ball.

Let the challah rest for up to a half hour. Brush with egg yolk, sprinkle with poppy and/or sesame seeds and bake.

Known in Yiddish as “Feigel Challah,” this challah originated in eighteenth-century Ukraine, where it was served on Rosh Hashanah and also during the pre–Yom Kippur seudah hamafseket.

The late food historian Gil Marks sources this in a verse from Yeshayah3  that states, “like the flying birds, so may Hashem protect us.”

The Sefer Matamim,4 a contemporary collection of minhagim, many of them Chassidic, sees the bird as a depiction of the winged cherubs that flanked the aron (holy ark) as symbols of Divine mercy. He points out that the gematria of the Hebrew word “malchut” is 496, and the gematria of the singular cruv is 228. Add the two cherubs together and you get 456. Add to that a mem sofit, which is 40. So both malchut and cruv doubled with a mem add up to 496. The idea is that the cherubs, symbolizing mercy, connect to the concept of Hashem’s kingship.5

To form the bird, roll the dough into a thick log. Cut off one third of the dough.

Form the larger piece into a ball; this will serve as the base, or the body, of the bird.

Cut the smaller pieces of dough into four similar-sized pieces. Roll each piece into a ball. Using two balls, form the wings of the bird by pressing into the body on opposite sides.

The third ball will serve as the bird’s neck. Flatten the ball slightly. Press it on top of the bird, slightly forward from the wings. With the final piece, form another ball and press it on top of the neck. Insert an almond for the beak and two raisins for the eyes. After shaping the challahs, let them sit out for another 20 minutes or so to rise again, so they will come out light and fluffy. Brush with egg yolk, sprinkle with poppy and/or sesame seeds and bake. 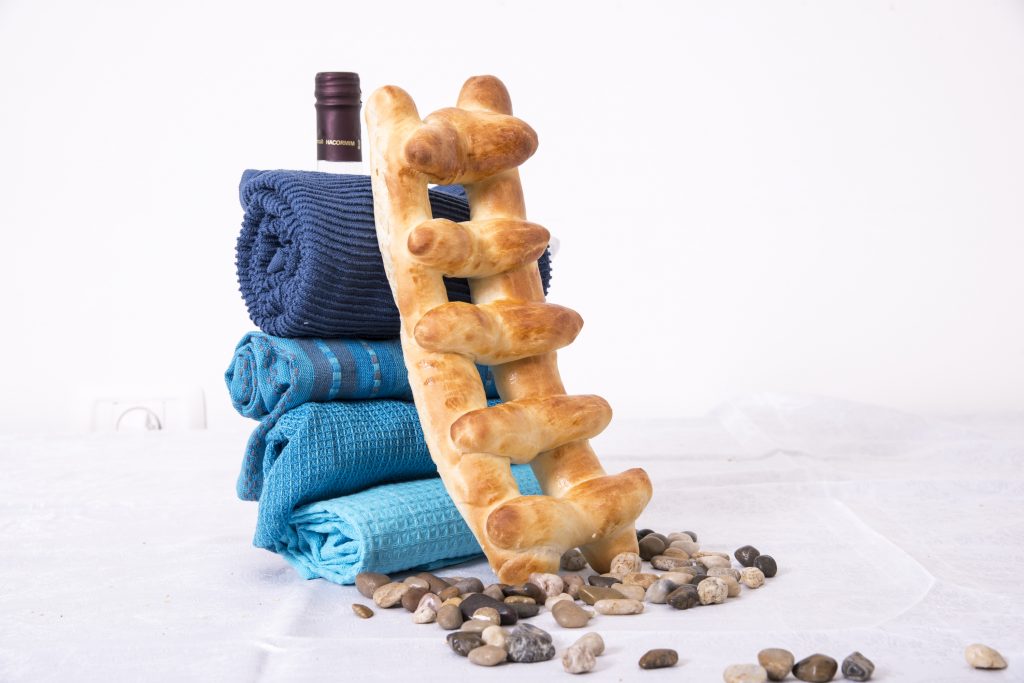 The Midrash Tanchuma states that Hashem erects ladders in Heaven and everyone has a rung; people are either going up or going down the ladder, representing their spiritual growth. The Unetaneh Tokef prayer, in fact, describes this process of ascent and descent.

The gematria of the Hebrew word “sulam,” which means ladder, is equivalent to the gematria for “v’Sinai,” reminding us of the Torah, which is our ladder linking heaven and earth.

These loaves can be fashioned to resemble a ladder, or a ladder shape can be embedded inside a round challah.

To create a ladder, use the Single Challah Recipe. Divide dough into three equal pieces. Roll two pieces into 12-inch logs. On a parchment-lined baking sheet, lay these two pieces parallel to one another leaving a two-inch gap in between. Roll the remaining dough into a 20-inch log, and cut it into five four-inch pieces—these are your rungs. Allow dough to rest 15 minutes to a half hour. Brush with egg yolk, sprinkle with seeds and bake. 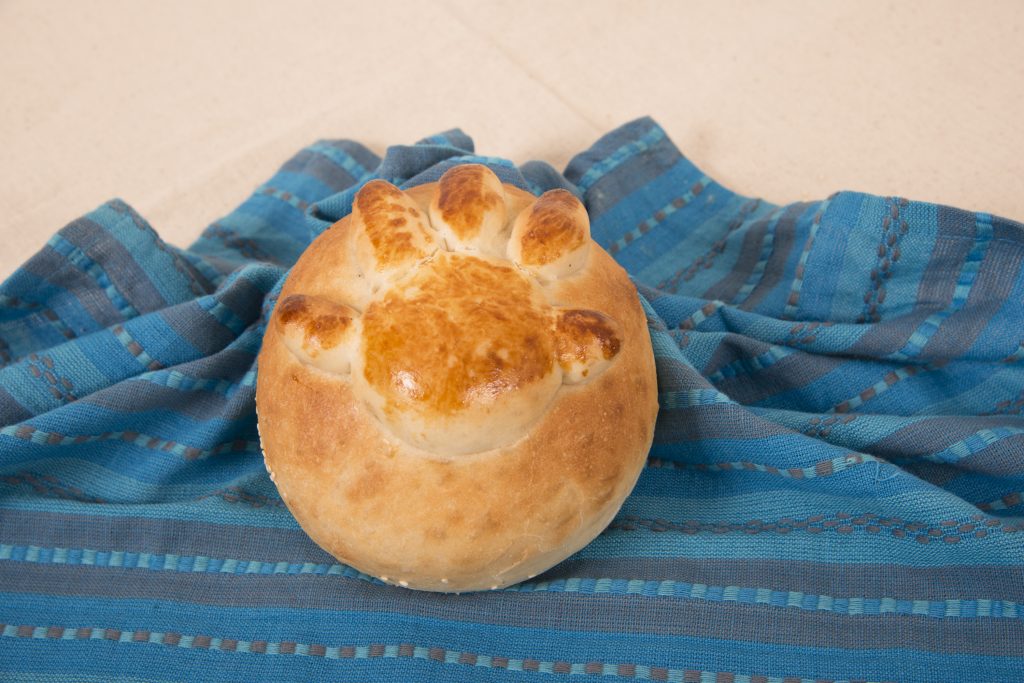 According to Marks, the tradition of placing the form of a hand on top of a round challah has roots in eighteenth-century Ukraine. The hand references the V’chol Ma’aminim prayer with its request to Hashem to open the Heavenly doors to those who knock with repentance. The hand also symbolizes our hands outstretched to Heaven begging for a good and blessed year.

Make a round challah (a boule or classic ball-shaped loaf rather than a spiral), leaving off a golf-ball-sized piece of dough. Roll it out and fashion it into the shape of a hand. Stick it on the challah.

This challah resembles the ram’s horn blown through the Yemei Ratzon to remind us to repent. This is a fun shape that kids especially enjoy.

Use the Single Challah Recipe to create the dough. Roll dough into a 12-inch log.

Using a metal cornet baking form (available online from specialty baking shops), wrap the dough around the cornet, curving to form the crescent shape of the shofar.

On Rosh Hashanah, the Heavenly Court is in session and our actions are weighed on a scale.

Creating a challah in the shape of a scale is slightly more complex, but it’s sure to be a conversation starter.

2 large egg yolks (reserve one for the glaze)

2 teaspoons poppy or sesame seeds, or a combination

In a large bowl or the bowl of a stand mixer fitted with a dough hook, combine yeast, sugar, water, oil and one egg yolk. Stir or beat in the flour, adding it one cup at a time. Knead on a floured board until the dough is smooth and supple (this is too small a quantity from which to take challah, even without a berachah). Pour one tablespoon of oil over the dough.

Cover it with a cloth, and leave it to rise in a warm place. When the dough is double in bulk, punch it down and shape. Allow to rest for 15 minutes to a half hour.

Glaze with egg yolk, sprinkle with seeds and bake at 375° F for 35 minutes or until golden brown. Freezes well. n

Carol Ungar is an award-winning writer whose essays have appeared in Tablet, the Jerusalem Post, Ami Magazine, Jewish Action and other publications. She teaches memoir writing and is the author of several children’s books.