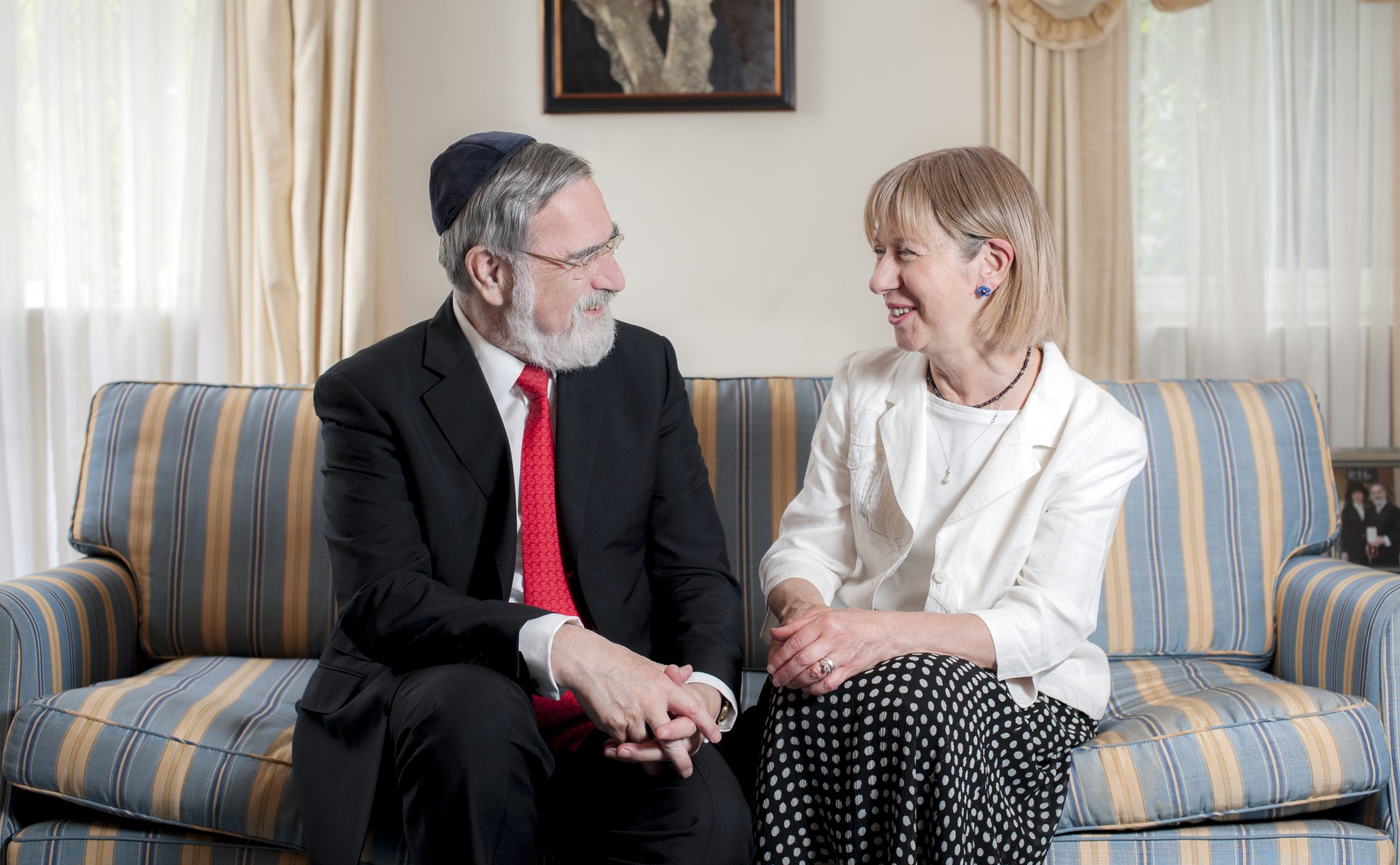 Courtesy of the Office of Rabbi Sacks/Blake Ezra Photography

Rabbi Lord and Lady Sacks set a unique example of a married couple living and working together very much in the public eye.

Upon his retirement from the British Chief Rabbinate in 2013, Rabbi Lord Jonathan Sacks was courted by a number of prestigious universities keen to have a public intellectual of his caliber join their ranks. His decision to accept a dual role at New York University and Yeshiva University was particularly exciting for me—I was serving as a Torah educator for the Heshe and Harriet Seif Jewish Learning Initiative on Campus (OU-JLIC) at NYU at the time and knew this would mean our community at NYU’s Bronfman Center for Jewish Student Life would become Rabbi Sacks’ base in Lower Manhattan.

Rabbi Sacks’ retirement was anything but—he didn’t slow down at all, nor did he consolidate his focus. If anything, his teaching, publishing and leadership continued without interruption, and the scale of his impact grew exponentially. Having been a devotee of Rabbi Sacks since my teens, the opportunity to work closely with him on campus was one that I relished.

On a freezing February morning, my phone rang, and Rabbi Sacks’ unmistakable baritone voice met me unprepared on the other end of the line.

“Gideon, I am . . . well, I don’t know quite how to say this, but I am utterly lost. I need your help. I don’t really know who else to call.” On occasion, undergraduate students would seek me out in moments of existential crisis, but I was still surprised that Judaism’s global ambassador was turning to me for spiritual support. I took a deep breath and tried to center myself.

“I simply can’t find my way . . . ,” Rabbi Sacks continued. “Can you give me directions to NYU’s Global Center for Academic and Spiritual Life?” Suddenly I realized the former chief rabbi was not seeking my pastoral care but was simply unable to find his way to his next speaking engagement.

A lecture hall filled with students awaited, yet the Manhattan grid was a snow-filled jungle of confusion for Rabbi Sacks who was new to the city. In the Seinfeld-esque conversation that ensued, we eventually determined that he had been standing right outside the very address he was looking for all along.

To me, Rabbi Sacks was a transcendent figure. A national treasure. Among his many talents, he had a stage and pulpit presence that was simply electrifying—when he was speaking, I felt I was in the presence of a modern-day Biblical prophet. But during that phone call he crumbled down to size—facing such a mundane problem just like any retiree struggling to navigate the new landscape of their lives.

He swiftly found the lecture hall and managed to capitalize on the sense of anticipation his slightly late arrival caused by mesmerizing the students with his enchanting weave of Torah, literature and Western philosophy, littered with humorous sides and snippets of conversations with world leaders he had met along the way. When chatting later, Rabbi Sacks shared with me that during this stint in New York he was alone—Lady Sacks was back in London attending a family affair. Without her by his side, he was rudderless.

Since Rabbi Sacks’ death one thing has struck me more than any other. And I think it is integral it not get overshadowed as the scope of his legacy is measured. In so many of the photos shared and stories told, Lady Sacks is there by his side. When I think back to all the times I heard him speak over the years in Israel, America and the United Kingdom, Lady Sacks was always there.

She didn’t have to be. Most political and religious leaders are not usually accompanied by their spouses wherever they go, but there was a quiet act of role modeling that Rabbi and Lady Sacks achieved by their constant companionship. They were a single unit that no amount of public statesmanship was going to impact. How many sermons did Rabbi Sacks begin with “Elaine and I . . . ”

They set a unique example of a married couple living and working together very much in the public eye, but doing so in the most discreet and dignified way imaginable. I can’t think of another couple quite like them. Speech after speech, Shabbaton after Shabbaton, year after year—she was always there.

The contours of communal expectations of the rebbetzin are often unclear, even though those expectations are no less rigorous than those of the rabbi. The role of the rabbi and rebbetzin in the community are divergent, the talents called upon are often vastly distinct, and yet they are meant to be a team, evenly balanced. If this challenge is true for a rabbi and rebbetzin, I would imagine it certainly to be the case for a chief rabbi and chief rebbetzin!

After Rabbi Lord Sacks stepped down as chief rabbi, Lady Sacks, a radiographer by training, would have been forgiven for finally taking advantage of her well-earned retirement. Yet her sense of mission and devotion to the Jewish people were equal to his, and as long as he was working so was she.

One of Rabbi Sacks’ esteemed predecessors, Rabbi Dr. J. H. Hertz, served as British chief rabbi from 1913 to 1946, a period encompassing both world wars and the Holocaust. Rabbi Hertz knew well the trials and tribulations of religious leadership in deeply testing times. Yet in his magisterial commentary on the Torah he explains with such simplicity what Jewish marriage aspires to be. In Bereishit 2:18, when Hashem decided to create a wife for Adam, she is described as an ezer, a helper. Rabbi Hertz explains:

A wife is not a man’s shadow or subordinate, but his other self, his “helper,” in a sense which no other creature on earth can be.

Rabbi Lord and Lady Sacks personified this idea gracefully. My sense is that Rabbi and Lady Sacks were not trying to set an example—their partnership was far more organic than that. Lady Sacks was the paradigmatic ezer kenegdo—she was Rabbi Sacks’ “other self.” Without her steadfast support and unrelenting companionship, he wouldn’t have been able to be the leader he was, nor could he achieve a fraction of what he accomplished. Simply put, without her there, he wasn’t fully there.

The communities led, the rabbis mentored, the honorary doctorates received, the books published, the keynote speeches delivered, the lives changed—they were his, and therefore they were equally hers. They were theirs. Rabbi Lord and Lady Sacks have jointly led the Jewish people across the world for more than thirty years, and we are forever in their debt.

Rabbi Gideon Black resides in Englewood, New Jersey, with his wife and children. Rabbi Black is OU-JLIC’s director of professional recruitment and leadership development. OU-JLIC provides leadership and support for over 5,000 college students annually on twenty-three campuses in North America and Israel.

5 1 vote
Article Rating
This article was featured in the Spring 2021 issue of Jewish Action.