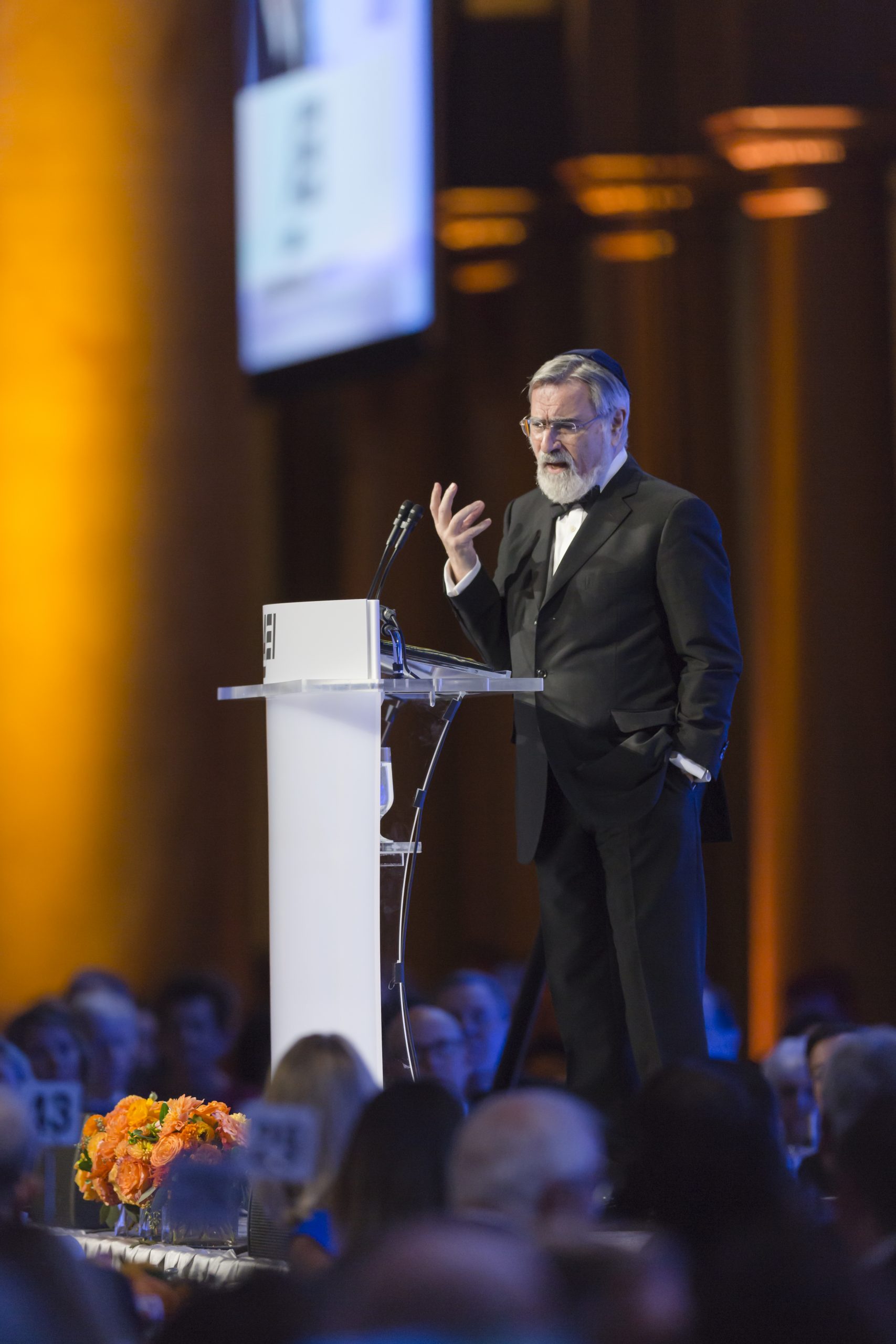 Much has been written and said about the extraordinary life accomplishments of Rabbi Jonathan Sacks since his sudden passing in November 2020. I am still overwhelmed with shock and sadness.  I knew that he was ill, but I had no idea that he was deathly ill. I simply still can’t believe that he is no longer with us.

The essays that follow will explore Rabbi Sacks’ views on a number of contemporary issues. Indeed, he addressed many: Jewish identity, anti-Semitism, Israel, the family, Jewish unity, science and religion, hope, faith, responsibility, morality, tradition, leadership, the power of music, the value of argument and debate, the role of religion in contemporary life, the power of community, and, above all, the relevance of Judaism to the world.

In introducing these reflections, I want to offer something different, to extrapolate from the story of his life a series of lessons that are relevant to each of us. Yes, he was a spellbinding orator, a gifted writer, a most effective communicator—able to connect with a multiplicity of audiences, Jewish and non-Jewish, young and old—but what does that have to do with me and you? How does all this affect our lives? We are not necessarily spellbinding orators, gifted writers or effective communicators. We are not philosophers, theologians or public intellectuals with international reputations. We will not write three dozen highly popular books that will address contemporary spiritual and moral issues demonstrating what the intellectual power, beauty and wisdom of Judaism can offer the world. We will not receive highly prestigious awards and honorary doctorates, debate atheists, appear regularly on the BBC, be ambassadors for Judaism and the State of Israel on the world stage, bring intellectual clarity and a moral voice to the issues of the day, and travel tirelessly to convey a message of hope and optimism to a world sorely lacking both. So how is Rabbi Sacks’ life relevant to us?

I would like to suggest a number of lessons that we each can learn.

In one of his celebrated mussar discourses, Rabbi Chaim Shmulevitz highlights the fundamental importance of the rabbinic principle of kavod haberiyot, demonstrating honor and respect to all human beings, even someone like Bilam whom he describes as “the epitome of every lowliness in the world (avi avot kol ha’pechitiyut sheba’olam)” or “the lowest of the low (pachot she’bepechutim).” In addressing why this is the case, he points to the core inherent greatness of every human being, citing the Midrash (Vayikra Rabbah 24:9):

Rav Chaim asks: why does the Midrash need a special teaching to inform us that we are not equal to God? How can we ever entertain such a possibility? What is the hava amina (supposition)? And he responds with an answer I find powerful, and even shocking. He suggests that we could only ask such a question because we are not aware of the greatness of each human being. But Chazal who knew that each human being is capable of achieving incredible greatness felt that an extra word or phrase was, in fact, needed to indicate that we humans are not on a par with God.1

The first lesson that Rabbi Sacks’ life taught us is the great power of one person, the incredible ability each one of us has to make a meaningful difference in this world.  I would hope that that is something that we can internalize very profoundly. Rav Chaim was not talking about a great person. He was talking about us.

Number two, Rabbi Sacks was a mevakesh, a seeker, and he was a mevakesh his entire life.  He was born into a traditional home and was not very interested in Jewish matters; he entered Cambridge University with the intention of majoring in philosophy. But he recognized that something was missing and when he was about twenty, he took a trip to the United States to visit two people in particular, the Lubavitcher Rebbe, Rabbi Menachem Mendel Schneerson, and Rabbi Dr. Norman Lamm. His encounters with them changed his life. They both inspired him to look beyond where—and who—he was and to devote his energies on behalf of the Jewish people. He had little formal Jewish education at that time but he returned to England determined to seek it, and he continued to seek it—and more—for the rest of his life.

The Torah tells us that after Yitro spent some time with his family in the Israelite camp, he said (Exodus 18:11), “Now I know that the Lord is greater than all the gods.” Rashi (s.v. mikol haelohim) comments that this teaches us that Yitro was familiar with all the idolatry in the entire world; there was not a single idol that he did not worship. He was, indeed, in a unique position to recognize that the Lord was greater than all the other gods because he had a first-hand acquaintance with all of them.

For many years I considered this an indictment of Yitro. How terrible he was—a compulsive idolator, addicted to idol worship! But I recently came to the opposite conclusion, that, in fact, this is written in praise of Yitro. In truth, all he knew was idolatry; the world in which he lived was totally steeped in idolatry. He could not be expected to engage in anything other than idolatry. But Yitro was a mevakesh. Within that world he was never satisfied with what he found. He went from one idol to another in search of the meaningful religious experience that he craved. And he was finally convinced that he found it when he encountered the God of Israel.

This was Rabbi Sacks. Whenever he came to our home (whether in New York City, Brookline, Massachusetts or Teaneck, New Jersey), he went straight to the bookcase.  He wanted to see if there was a book there that he did not know. He sat and he read. He was very curious and very interested, and always wanted to learn. George Bernard Shaw said that the smartest person he ever met was his tailor because whenever he went to see him, no matter how often, he always measured him. He never assumed that he was the same then as he had been in the past.

This is very important for us. We too should not be complacent and not be satisfied with wherever we may be, whether it be religiously or intellectually, or where we stand in terms of our Jewish or worldly knowledge. We, too, need to be mevakeshim. Where we are now is not necessarily where we want to be or where we should be. We can learn more, know more, do more, in terms of both our bein adam leMakom and our bein adam lechaveiro commitments.

Number three. Rabbi Sacks demonstrated that the larger world in which we live matters. Baruch Hashem, our Orthodox Jewish world in America is thriving. With strong confidence, institutional strength, political influence and extraordinary unselfconsciousness, Orthodoxy has achieved a presence and prominence in America simply unimaginable even just a half century ago. We have day schools, shuls, mikvaot, restaurants. We are blessed with thriving communities. We can live our entire lives within the confines of our community. And so, we can conclude that vos gayt un dorten, gayt mir gornisht un (loose translation: whatever is going on there, I couldn’t care less). But Rabbi Sacks taught us that this is short-sighted. He taught us that the world outside does matter. A lot.

Shortly after Rabbi Sacks became chief rabbi of the United Hebrew Congregations of the British Commonwealth in 1991 he made a very important and conscious decision. He decided that in addition to serving as chief rabbi for the Jews of the Commonwealth, he would also serve as the chief rabbi for the non-Jews. He devoted himself to becoming a spokesman for Jewish values in the public marketplace, to bring the Jewish voice to the world at large. In his words, “To be a Jew is to be true to our faith while being a blessing to others regardless of their faith.” He developed this obligation in a talk he delivered at the Orthodox Union’s West Coast Convention in December 1997 entitled, “Orthodoxy’s Responsibility to Perfect G-d’s World.”2 I don’t know anyone else in the world who was able to do what Rabbi Sacks did particularly in this area, and who commanded the respect that he commanded across all sectors of the large world in which we live.

We will not appear regularly on the BBC.  We will not be invited to speak at the European Parliament in Brussels, the Vatican in Rome and at the House of Lords or 10 Downing Street in London. So, what can we do to affect the world? Do we have non-Jewish neighbors? Do we talk to them?  Do we model human decency for them? Do we visit our local policemen and firemen on Thanksgiving Day bearing gifts in appreciation for the work they do? Do we spend time feeding the homeless? How can we, each in our own way, demonstrate to the world around us that Judaism’s moral and ethical values can contribute to sustaining a virtuous and upright society?

There are more, many more, lessons to learn from Rabbi Sacks’ life (e.g., his discipline, his chesed, his parenting, and more). But I want to conclude with one in particular. Rabbi Sacks was a man of faith. It is one thing to preach faith; it is often quite something else to be a sincere and genuine person of faith. A number of years ago Rabbi Sacks was asked why he did not reflect on his by then two battles with cancer in any of his many writings. In response, he said:

It’s very simple. I saw my late father in his 80s go through four, five major operations . . . . Now, my late father, alav hashalom, didn’t have much Jewish education, but he had enormous emunah. I used to watch him saying Tehillim in the hospital, and I could see him getting stronger. It seemed to me that his mental attitude was “I’m leaving this to Hashem. If He sees that it’s time for me to go, then it’s time for me to go. And if He still needs me to do things here, He’ll look after me.”

And I adopted exactly that attitude. So on both occasions I felt, if this is the time Hashem needs me up there, thank you very much indeed for my time down here; I’ve enjoyed every day and feel very blessed. And if He wants me to stay, and there’s still work for me to do, then He is going to be part of the refu’ah, and I put my trust in Him. So there was no test of faith at any point—just these simple moments at which to say, “beyado afkid ruchi.” That was my thought. And since we say that every day in Adon Olam, I didn’t feel the need to write a book about it. It was for me not a theological dilemma at all.

There are many lessons we can learn from the life of the late Rabbi Jonathan Sacks. Rav Yaakov Yitzchak ben Dovid Aryeh veLiba. Tehei nishmato tzerurah betzeror hachayim.

Rabbi Dr. Jacob J. Schacter is university professor of Jewish history and Jewish thought and senior scholar at the Center for the Jewish Future, Yeshiva University.

“Elaine and I” by Rabbi Gideon Black

5 2 votes
Article Rating
This article was featured in the Spring 2021 issue of Jewish Action.