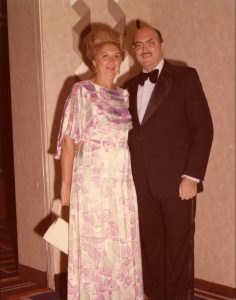 Rabbi Joseph Karasick, the last surviving member of American Orthodoxy’s “Greatest Generation,” was buried in Israel this past Elul. I will leave it to others to describe his over seven decades of selfless communal service, his historic role as OU president (1966-72), as board chairman (1972-78), as the tireless champion of the OU (actively participating in board and commission meetings into his ninety-ninth year) and as the main architect of the OU’s outreach to Jewish communities around the world—from France to the historic World Conference of Synagogues that he twice convened in Jerusalem. And I will leave it to others to try to describe his extraordinary relationship with his rebbe, the Rav, who made a point of attending the 1972 national dinner where Rabbi Karasick was honored (he was honored by the OU a few times). All this I leave to others. My hope is to express three points of hakarat hatov—one personal, and two on behalf of anyone who has ever benefited from the NCSY magic.

My wife Vivian and I have been active in NCSY since 1961. Many lay leaders deserve great credit, from Enid and Harold Boxer, who dared to dream of a national Orthodox Jewish youth movement in 1954; to OU President Moses Feuerstein, who agreed to try one more time, after several abject failures, and hire a charismatic young Rabbi Pinchas Stolper in the fall of 1959. But it was Joseph Karasick who (as Rabbi Stolper said at our Ben Zakkai Honor Society Dinner honoring the Karasicks over two decade ago) “put the ‘National’ into the National Conference of Synagogue Youth.” It was President Joseph Karasick who both led the battle for consistent halachic standards on the chapter and regional level (and you had to be there to appreciate the intensity of that battle) and fought for the hiring of the first full-time regional directors, starting with Lee Samson on the West Coast (it helped that Rabbi Karasick came from California). The NCSY we know today owes so much to those two ground-breaking efforts.

Personally, I feel utterly bereft. When my father Dr. Abraham Luchins, a”h, taught at Yeshiva College, Joseph Karasick was one of his favorite students (1939-43). To all of us on the OU Board, he was a link to the OU’s salad days. To me, he was the last person who remembered when I was born. He was the man who gave my father the watch he wore for the rest of his life, (Rabbi Karasick was in the watch business) which was bequeathed to my son Moshe (still works; they made good watches in those days). Twice a year (in the halcyon pre-epidemic days), Vivian and I would spend Shabbat at Lander College for Women and I would walk over a mile each way, regardless of weather, to sit next to him in shul and be treated to a vort from the Rav or the Rav’s father. And NCSY. He always asked about NCSY.

Pepa and Joseph Karasick were OU royalty. They came to every NCSY national convention (and how delighted they were when their son Mark married Linda Ulevitch, a public school NCSYer, whom he met when she chaired NCSY’s 1968 national convention). Suffice it to say that he was the only person on earth with two great-granddaughters elected to NCSY’s “Alumni Hall of Fame,” our Ben Zakkai Honor Society. He will be missed—but his legacy continues in his wonderful family.

Dr. David Luchins is a national vice president of the Orthodox Union and founding dean of Touro College’s Lander College for Women.

Memories of “Joe” by Julius Berman