As good as your relationship is with your child, you can make it even better. That’s the latest message coming from the OU’s Department of Community Projects and Partnerships, whose mission is to enhance Jewish communal life and confront ongoing communal challenges. 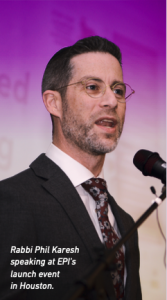 “We spoke with rabbis, educators and community leaders to find out what the most pressing challenges are,” says Rabbi Phil Karesh, executive director of the Department who launched the Empowered Parenting Initiative (EPI) in August of 2021. “Most of them pointed to one issue—the need to build our children emotionally.”

The Empowered Parenting Initiative is a parenting program comprised of various resources including The Digital Citizenship Project, a curriculum about the role of technology in children’s lives, and the Healthy Habits Hub, a series of “healthy habits” that foster positive family bonding. One of the major components of EPI is the thirty-five-year-old tried-and-tested University of Washington’s family training program, Guiding Good Choices (GGC). When Rabbi Karesh explored various parenting programs, he discovered that there are lots of programs, but “very few are research based.” Guiding Good Choices stood out. “We simply didn’t come across other curricula that have this kind of rigor with such impressive outcomes,” he says.

“We know that the GGC tactics actually work,” says Rabbi Ezra Goldschmiedt of Congregation Sha’arei Torah in Cincinnati, who was trained to deliver the course in his community, one of two communities selected by the OU to pilot the program; the other is the Houston Jewish community. The hope is to eventually go national.

Developed by faculty of the University of Washington’s School of Social Work, GGC has been successfully taught to families across the United States, and its effects last long after parents complete it—even into the next generation. Four to six years after parents of sixth graders participated in GGC, the participating youth, compared to controls, were 28 percent more likely to remain drug free, 41 percent less likely to use alcohol and marijuana and 54 percent less likely to progress to more serious substance abuse.

The philosophy behind GGC is simple: change the quality of the parent-child relationship and you will thereby address many of the issues affecting our youth, including anxiety, depression, general misbehavior and drug abuse. “The approach of insulating our children from any negative influence is increasingly becoming a pipe dream,” explains Rabbi Goldschmiedt. “Nowadays, there is a greater need to instill an inherent moral compass in children. This program helps you do just that.”

“We are proactively engaging parents in GGC to become the agents of change in the lives of their families by becoming closer with their kids,” says Rabbi Simon Taylor, national director of the Department of Community Projects and Partnerships. Obviously, even under ideal circumstances where children and parents have a wonderful relationship, children might choose to deviate from their parents’ values due to a number of factors.

The Empowered Parenting Initiative covers topics such as setting guidelines, managing conflict, dealing with anger in a positive way, teaching children to withstand peer pressure and strengthening family bonds. Rabbi Karesh and his team will work closely with the OU’s Center for Communal Research to gauge the success of the program. “We will be guided by data,” says Rabbi Taylor. Communities participating in EPI will also have access to rabbinic and educational experts and resources.

“Stronger families mean stronger communities,” states Tzivia Weiss, a Houston lay leader who is passionate about EPI. “We are going to start transforming Jews all over by changing one family at a time, one community at a time.”

“Parents have an irreplaceable role in the life of a child,” says Rabbi Moshe Hauer, executive vice president of the OU. “While schools play a critical role in socializing our children to Torah life and teaching them the Torah way, parents hold the primary responsibility of passing on the mesorah.”

Under the OU’s leadership, the University of Washington has trained seven sets of facilitators, who will lead the workshops in each community’s pilot program. Rabbi Karesh, who received semichah from Yeshiva University and a master’s degree in educational administration from Loyola University in Chicago, has also been trained in the GGC curriculum.

Several months ago, shortly after Rabbi Karesh completed the GGC training, a single mother from his community called him seeking guidance. Her eleven-year-old son had come home from school sad and listless. Refusing to speak with her, he seemed distant but clearly in pain. Based on the principles he had learned in the GGC training—one of which is that when children are going through challenges they need total unconditional love—Rabbi Karesh guided the mother in opening a dialogue with her son. She approached her son and said, “I see things are difficult for you now, and I want you to know the following: Firstly, I love you more than you can ever imagine. Secondly, whatever is going on, I will not judge you at all. And thirdly, I will be with you through thick and thin until we get to the bottom of whatever is bothering you.” As the conversation continued, the young boy started crying and ultimately revealed that he was being bullied at school. After sharing his experiences, he concluded by saying, “Mom, I really need your help in dealing with these kids at school. Can you help me?” Subsequently, the mother called Rabbi Karesh to express her gratitude for her newly acquired GGC tools that enabled her and her son to have a meaningful and productive conversation.

To ensure that the program speaks to the frum community, the Department of Community Projects and Partnerships staff, working together with the GGC program staff, customized the curriculum to suit the particular needs of the Orthodox Jewish community. “The university was intrigued when we approached them,” says Rabbi Karesh. “The birth rates in the Orthodox community are significantly higher than that of the general population. They were stunned to discover that many of our families have five or six or more children. With their interest in having a broader impact, the University is excited about working with our community.”

The Cincinnati and Houston communities are enthusiastic as well. “We are aiming toward creating healthier families—a stable and good family is the foundation upon which all Jewish growth can occur,” says Rabbi Goldschmiedt.

As we go to press, OU-sponsored EPI classes are ongoing in the Cincinnati and Houston Jewish communities. Other communities have already approached the OU about bringing EPI to their cities. In fact, in one community outside the tristate area, one of the rabbis in attendance at an EPI planning meeting noted that it was the first time all representatives from across the spectrum of the local Orthodox Jewish community were sitting around the same table. Rabbi Karesh understood why: it is easy to overcome differences when you are focused on strengthening Jewish families, a pressing need facing all segments of the community. “While community achdus is not the EPI’s goal, it is certainly heartening that it’s a byproduct,” says Rabbi Karesh. “It only bodes well for our youth and our future.”

Leah R. Lightman is a freelance writer who lives in Lawrence, New York, with her family.