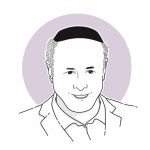 Jewish Action writer Binyamin Ehrenkranz interviewed the well-known psychologist Dr. David Pelcovitz about his views on raising resilient children. A recognized authority on parenting and child and adolescent behavior, Dr. Pelcovitz holds the Gwendolyn and Joseph Straus Chair in Psychology and Jewish Education at the Azrieli Graduate School of Jewish Education and Administration at Yeshiva University.

Binyamin Ehrenkranz: What are the traits of a child who is mentally healthy?

Dr. David Pelcovitz: A mentally healthy child can regulate strong emotions, such as anger, sadness and anxiety, and is capable of having strong connections. Freud used to define one who is mentally healthy as having the “capacity to work, love and play.” Using this definition, children who are mentally healthy are able to manage the academic demands placed on them, maintain friendships appropriate for their age level, and enjoy themselves. Additionally, they have a sense of self-efficacy—they embrace an “I-can-do-it” mentality.

BE: What’s the most important thing to keep in mind while trying to be a responsible parent?

DP: Parents don’t have to be perfect. Some of the most respected thinkers in this area talk not about perfect parenting but about “good enough parenting.” Parents will lose their temper, especially given the stresses of lockdown and repeated quarantines, but they are “good enough” as long as they’re there loving their kids most of the time.

But what tends to be most associated with good parenting is finding the balance between love and limits. Parents who provide all love and no limits tend to raise overindulged and spoiled children. Parents who are all limits and no love end up with belligerent children. Rules without relationship equals rebellion. What you want is good enough parenting, marked by love and the knowledge that it’s okay to say no and to set limits on your kids even if they’re upset when you do so.

“Yasser bincha ki yeish tikvah v’el hamito al tisa nafshecha—Discipline your son for there is hope, let your soul not be swayed by his protest,”* says Shlomo Hamelech in Mishlei (19:18). We need to put limits on our children and not pay attention to their complaining. The Midrash adds the following: “Kol hamosif avi yissurim al beno mosif haben ahavah al aviv,” loosely translated as, the more a parent sets limits on the child, the more the child will love the parent. I see that in my practice all the time. This approach works as long as parents impose limits with love and support.

BE: What are practices young parents can adopt to raise an emotionally resilient child?

DP: With regard to parenting and resilience, three large-scale longitudinal studies were conducted in which researchers followed children born on the islands of Kauai, Martha’s Vineyard and the Isle of Wight. The Kauai Longitudinal Study, which is still ongoing, followed every child born in 1956 into adulthood to determine what kind of parenting is associated with resilience.

All three island studies yielded the same core ingredients. Parents who raised resilient children provided 1. at least one caregiver who was there for the child, and 2. a strong sense of “religious belief” marked by hope, purpose and altruism. These parents taught their kids how to not just take but also how to give. Having kids give to others and learn, even at a very young age, the importance of being there for other people are, according to the research, associated with resilience.

BE: Can you elaborate on the importance of religious belief in building emotional resilience?

DP: When I was at the beginning of my career, there was a very different set of attitudes in the mental health profession. I remember having a professor who always quoted Freud’s view of religion—i.e., it’s an obsessive-compulsive neurosis and a crutch. But research has clearly shown over the last many decades that without that “crutch,” we limp. Responsibility, faith and children believing in something greater than themselves are factors associated with resilience.

BE: Let’s focus on children’s self-esteem. From a religious standpoint, we are mindful not to inflate their egos too much lest they get haughty. How does self-confidence factor in?

DP: The key is accuracy. It’s not at all healthy for children to be praised for abilities they don’t have. In the United States, most parents describe their children as above average in almost every area. Our community is not immune to that. But the reality is that our children would do much better if we helped them find and build their strengths. We also need our children to realize that nobody’s perfect—every person has strengths and weaknesses.

Many parents believe that one should never point out weaknesses for fear that children will feel badly about themselves. But that is a misconception. Mistakes are actually a gift. Kids grow by making mistakes. The key is to raise children to view failure as feedback rather than a setback. The Hebrew word cheit, sin, means “missing the mark,” not that you’re an evil person who sinned. When a child makes a mistake, the message should be: you need a do-over.

Rav Tzadok HaKohen of Lublin discusses some of these ideas in Tzidkat Hatzaddik (154), where he states: “K’shem shetzarich adam leha’amin b’Hashem Yitbarach, kach tzarich achar kach leha’amin b’atzmo—Just as a person is required to believe in G-d, so too is he afterwards required to believe in himself.” We need to raise our children to believe that Hashem cares about us, says Rav Tzadok. He’s always there, in a sense believing in us just like we believe in Him. We’re not insignificant beings, here one day and gone the next.

It’s that kind of beautiful imagery depicted by Rav Tzadok that captures not only the way we want to view ourselves, but also the kind of healthy self-efficacy we want to instill in our children. But it must be grounded in accuracy and an understanding that you don’t have to be perfect. Perfectionism is not our aim.

The goal should be to help our children feel, even in the face of frustration, “I think I can handle this.” At the same time, they should understand that sometimes they may not be able to handle a situation, and it is okay for them to then seek out help.

BE: Would you say perfectionism
is a particular challenge in frum society today? If so, how can we change our mindset?

DP: That’s a very important point. In our community, we tend to have a set of expectations for our kids that is too narrow. It’s way too easy for kids to start feeling that they’re just not making it. There is a disappointment they often see reflected back in our eyes when they don’t act perfectly.

What happens all too often is that kids start to view themselves as failures while in school. We see this in all parts of the religious spectrum in our community—schools that insist on a very narrow definition of excellence, not recognizing the creativity, entrepreneurial abilities and other aptitudes that many children possess. Instead, they define success only by a child’s excellence in math or reading, or by their ability to sit still in a chair throughout the long hours of learning limudei kodesh. That attitude can be destructive.

Embedded in the berachot given by Yaakov Avinu in Parashat Vayechi at the end of his life are some brilliant thoughts. The pasuk says “ish asher k’virchato beirach otam, he blessed each according to his appropriate blessing” (Bereishit 49:28). On this verse, Rav Yerucham Levovitz had an original interpretation, which Rabbi Dr. Abraham Twerski would often quote. If what you have in mind when you bentch your kids are your own dreams and wishes for your child—you want her to be a doctor because you never made it into medical school; you want him to be an incredible talmid chacham because you never had that kind of mind—it’s as if you are taking a pail of water and watering a plot of earth that has no seeds in it. There has to be a match between your child’s potential and your wishes for him or her.

In a similar vein, we need to figure out a way to have individualized definitions of excellence and success. Very often, the kid who appears to be the most troublesome becomes incredibly successful down the road and ends up being chairman of the board of the school! The key is to see each child’s uniqueness as a source of strength rather than a threat.

BE: We’ve talked about parents, but there’s a broader family of uncles, aunts and grandparents. What role do they play in contributing to a child’s well-being, especially in communities such as ours that tend to have close, tight-knit families?

DP: One of the silver linings of Covid is that many aunts, uncles and, most importantly, grandparents have deepened their bond with the next generation, especially if they were living under the same roof. Grandparents play a crucial role in children’s development. Research shows an association between mental health in children and the presence of active grandparents and other extended family. Children need grandparents who spoil them a little bit and love them unconditionally.

I have been lucky to have young toddler grandchildren living with us since Covid started. The other day they were playing “lockdown” on the kitchen floor in my house. While wearing masks, one would touch the other and say, “Oh, you touched me! You have to go into quarantine.” But they were doing it with joy and laughter and pulling me into their game. It was amazing. It showed the kind of resilience that comes with multiple generations living under the same roof.

Let’s not lose sight of the beauty of having children grow up feeling close to their grandparents, aunts and uncles. Although most people do not have their grandchildren under the same roof, there are so many ways of connecting via modern technology. This is a take-home message that I hope people get as the pandemic gives way to more of a perennial illness like the flu and we start to get back to some semblance of post-pandemic normalcy.

BE: You wrote the book Balanced Parenting, which was co-authored by your father, a storied shul rabbi. Is there a memory either of him or of distinctive things he did that you picked up on and that stayed with you?

DP: He was an amazing father, but also an amazing grandfather, great-grandfather and great-great-grandfather. He had a profound impact on every one of his family members. As he got older, he was much less mobile but his mind was still sharp, so he would give people—especially his children, grandchildren, great-grandchildren and even great-great grandchildren—undivided attention. They loved being with him because he had a way of relating to them that was totally accepting and supportive; it was something I think they found rare in their lives.

At the very end of his life, he often quoted the idea that failure is the source of growth. You have to learn how to “fail better,” he would say, quoting the famous writer Samuel Beckett. That’s the way he was with his grandchildren. You couldn’t mess up. He used to give musar so gently you didn’t even realize it was musar.

On the last day of his life, he went to one of my children, an adult child who is a little bit out of the box—a wonderful, very successful guy, but he marches to the beat of a different drum. My father held onto his grandson and said, “Chaim,** just be Chaim.” Those were his last words to him.

All of the grandchildren carry those kinds of words, and it’s become a model for me now that I’m becoming a more active grandparent than I was before Covid.