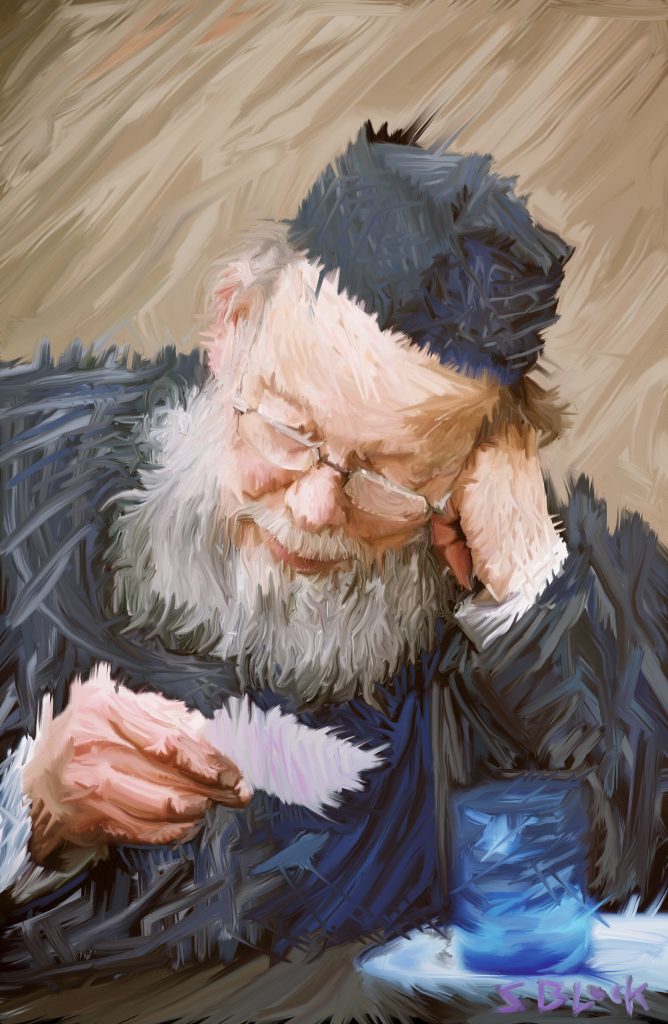 Rav Shlomo Wolbe. Illustration by Ilan Block, created with permission of original image owner AE Photos.
Ilan developed a unique painting style based on his innate skill, quirky personality, and hard work. The style is intuitive and improvisational with many of the choices being made on the fly. Ilan was raised and resides in Highland Park, New Jersey and studied in Yeshivas Reishit Yerushalayim. He learned under Rav Yacov Friedman. He can be reached at ilanblock@gmail.com or found on Twitter @ilanblock.

We can often achieve outstanding results (and steer clear of disaster) just by following a handful of trustworthy principles. This is the case when it comes to raising confident, emotionally strong children. Rav Shlomo Wolbe, zt”l, a master educator from the previous generation, offered these pieces of timeless guidance:

The Mishnah (Sanhedrin 4:5) teaches, “The supreme King of Kings, the Holy One, Blessed be He, stamped all people with the seal of Adam, and not one of them is similar to another.” In Rav Wolbe’s formulation: “I, with all my potential and traits, profile and spiritual strengths, am unique in this world. Among all those alive today, there is not a single other like me. There was no one like me in previous generations, and there won’t be anyone like me until the end of time!” (Alei Shur, vol. 2, p. 71). According to the Vilna Gaon (Mishlei 22:6), only those who perceive this uniqueness in children can help them become all they can be: “When you compel a child to live in conflict with his nature, he may cooperate in the short term out of fear, but he will veer from your teachings when he eventually achieves independence.”

Expert parents view each child as totally unique, and they avoid the mistaken feeling that “certainly my derech is my child’s derech, or at least it should be!” (Zriyah U’Binyan B’Chinuch, p. 30). The fact that a parent flourished at a certain type of school, lived in a certain type of neighborhood and chose a certain career is meaningless. Today, the most successful parents don’t even assume that their children will wear the same type of head covering or daven the same nusach. They exert themselves day after day, hour by hour, to humbly discover who their children are to help them intelligently navigate their unique paths.

2. Give children the freedom to err

Mature adults aren’t afraid to gather the necessary information and make their own decisions. They may turn to others who can share expertise, but they don’t ask others to make choices for them. Rav Wolbe calls this quality “da’as.” A person who is terrified of making a mistake can’t develop da’as. “One must accept the risk of errors,” Rav Wolbe said. “We will learn from them for the next time” (Pirkei Kinyan Da’as, p. 66). We can help our children grow into adults who possess da’as by habituating them in making their own decisions. This is especially important for teenagers and young adults, but expert parents also grant this sort of choice to younger children. Of course, we don’t allow two-year-olds to run into the street or touch a hot oven. But we do cultivate our children’s da’as by permitting them to make the decisions they are old enough to make and allowing them to learn from their mistakes (just as we learned from our youthful mistakes). As long as we don’t treat five-year-olds, fifteen-year-olds and twenty-year-olds like two-year-olds, or two-year-olds like five-, fifteen-, or twenty-five-year-olds, we will be allowing them to make the kind of mistakes that are opportunities to develop not only wisdom, but also confidence and resilience.

Generally, people express love in two ways: attention and affection. A vast scientific literature (summarized in my book To Kindle a Soul) describes how each of these expressions of love uniquely impact a child.

When we are attentive to a child’s needs, we create security and confidence, and this provides the internal strength children need to handle stress later in life. Attentive parenting also creates self-esteem, independence and confidence. Conversely, children who do not receive enough attention early on tend to be clingy when they get older, suffer from separation anxiety and respond with panic when pushed to explore the world or when left in the hands of an unfamiliar caregiver.

A middle-aged gentleman once disclosed to me that his father showed him neither attention nor affection. He described the resulting emotional gash that created psychological hurdles and even physical disease from childhood through his adult life. This son yearned for his father’s love, but his father devoted his entire being to the pursuit of his true love: wealth. When the father reached his mid-eighties, he had a change of heart and apologized to his son. Curiously, the son told his father that a precondition of reconciliation was a $1 million gift. Initially, it seemed that the son had inherited his father’s appetite for wealth, but that wasn’t the case. Before the father could fulfill the request, the son upped the ante, demanding that his father give similarly extravagant gifts to others whom the son felt his father had harmed. The son knew such penance would empty the coffers his father had spent a lifetime filling up. That was the son’s real agenda. He felt that his father couldn’t simultaneously love him and love wealth, and he wanted his father to demonstrably reject his first love, money, in favor of his son and reconciliation.

Children need to feel that they are quintessentially precious to their parents. Expert parents convey this multiple times a day. It starts with feeding, changing diapers and giving lots of hugs and kisses. It continues with picking up children on time, keeping promises, staying off the phone when we’re spending time with them, and being reliably present. It means helping with homework, Purim costumes and the school play, thoughtfully customizing school snacks, and more hugs and kisses. It’s a message we transmit every time we sit by an ill child’s bedside, gingerly apply a Band-Aid or take a child out for one-on-one private time. The list of opportunities to fill our children with our love is as long as a lifetime. And it is a goal that could be put at risk when we disregard and devalue these physical and emotional needs or contract them out too often to hired help. Chinuch is more complex than just recognizing a child’s uniqueness, giving freedom to err and expressing love with abundant attention and affection. It requires doing a lot more right than just embracing these three principles. However, parents who check these three boxes tend to raise more confident, emotionally strong children. 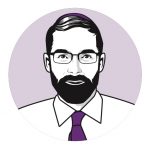 Rabbi Leib Kelemen served as senior lecturer at Neve Yerushalayim from 1996 to 2009. In 2009 he founded the International Organization of Mussar Vaadim, a network of more than two dozen classical musar vaadim in the USA and in Israel. He is the author of dozens of newspaper and journal articles and several books, and is the translator of Rav Shlomo Wolbe, zt”l’s sefer, Zriyah U’Binyan B’Chinuch (“Planting and Building” [Jerusalem, 1999]). He is the founder and dean of the Center for Kehillah Development.