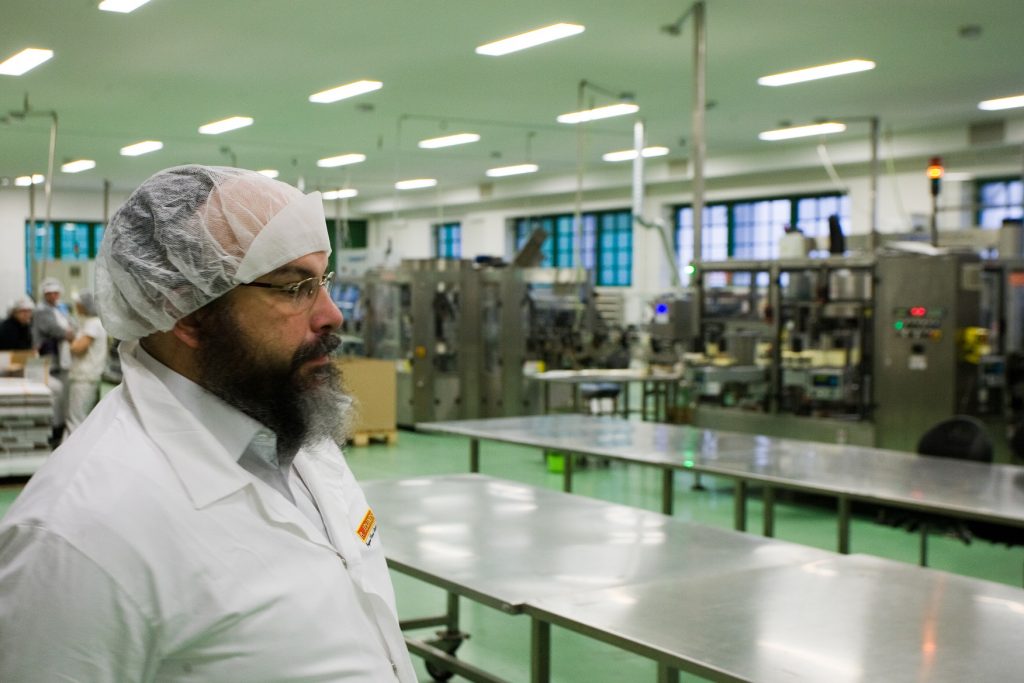 Rabbi Yisroel Hollander supervising a Pesach run of Slivovitz at Rudolf Jelinek in the Czech Republic. Courtesy of Rudolf Jelinek

On an ordinary week, Rabbi Yisroel Hollander, who lives in Antwerp, Belgium, finds himself taking between four and six flights throughout Europe; he also averages about 50,000 miles annually on his car.

Such intense traveling is not unusual in Rabbi Hollander’s profession. As OU Kosher’s senior rabbinical representative of Europe, Rabbi Hollander, who has been working for the organization for twenty-five years and speaks six languages, supervises the majority of OU-certified companies in Europe, including Eastern Europe. “I am always moving from place to place,” he says.

Covid, however, has made his usually hectic schedule seem almost relaxing. One week this past March, Rabbi Hollander’s itinerary was dizzying: On Tuesday—Poland, Wednesday—Italy, Thursday—Portugal. But while trying to plan the itinerary some weeks before the trip, the British-born rabbi, who must take a weekly Covid test in order to pass airport security, realized he had a problem: there were no evening flights. “Before Covid, I had the pick of flights,” he says. “Since Covid, I can’t plan more than a day in advance.” To make matters worse, because so many initial inspections of plants had been delayed due to the virus, there was a significant backlog. (An initial inspection takes place when a plant that has never been certified kosher gets a comprehensive review, an intense process that takes hours.)

One of the hallmarks of an effective mashgiach is flexibility. Early the next morning, Rabbi Hollander flew to Prague, then drove five hours to Poland to visit a granola company. With no flights available, he decided to drive to Italy, over 1,000 miles away. “I’m on the continent,” he said. “I can drive everywhere.”

He left Poland at 11:30 in the morning, driving through snow and getting stopped at three country borders (Germany, Austria and Italy) along the way, before arriving at his hotel in Italy at 10:30 pm. After visiting an Italian chocolate company the following morning, Rabbi Hollander was on his way once again, driving five hours to the airport in Munich, where he caught a flight to Madrid. “Yesterday I didn’t know how I was getting from point A to point B,” he says. He slept over in Madrid and flew to Portugal the next morning. “Every week, my wife used to ask me what my schedule is for the week—which countries I’ll be visiting,” says the rabbi. “I used to know the answer.”

Quarantining in a Crunch by Rabbi Eli Eleff