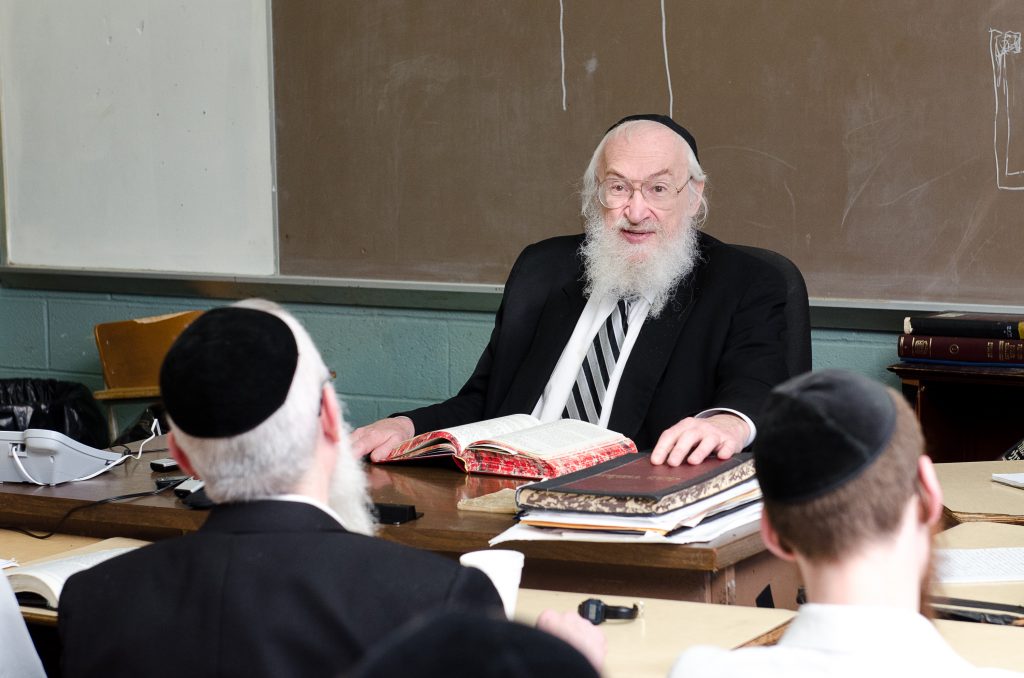 The Rambam writes about the Ri Migash that “his intellect, in its knowledge of the entire Talmud, was frightening.” Rav Chaim Yisroel Belsky, too, had a frightening intellect, which included not only knowledge of kol haTorah kulah but also the scientific and mathematical background necessary to understand the Torah and to apply halachah to reality. (For a while, he even taught mathematics at Yeshiva Torah Vodaas.)

Rav Belsky, who served as a halachic advisor to OU Kosher for nearly thirty years, was the nexus between theoretical, abstract knowledge and practical, applied knowledge. He didn’t just know Shas, he was a mohel; he wasn’t only a master of the halachot as written, he also knew how to shecht (slaughter animals) and perform nikkur (the process of making an animal kosher by removing the cheilev, forbidden fats, and the gid hanasheh, sciatic nerve). In fact, during the summer months, Rav Belsky would bring boys from Camp Agudah to a plant in Goshen, New York, to show them how nikkur is performed on a deer.

Rav Belsky had a scientific inclination and a curious mind, both of which led him on a constant search for truth. If we were dealing with a she’eilah regarding bitul b’shishim, he would effortlessly calculate the volume of room-sized containers. (Bitul b’shishim applies when a non-kosher food gets mixed into a kosher food; in many cases, if it’s less than one sixtieth of the portion, it can be considered nullified.)

The OU was once dealing with a complicated she’eilah regarding a tank of oil imported from Asia. Rav Belsky bravely climbed a tall, narrow ladder to peer into the tank of oil and calculate its properties! When the highly controversial issue arose regarding the permissibility of certain types of fish that are often infested with worms, Rav Belsky’s knowledge, along with the kabbalah he had received from his rebbeim, lent him the confidence to permit the continued ingestion of fish. Rav Belsky posited that the anisaki worms migrated from the flesh of the fish to its gut and therefore did not render the fish unkosher. He cited an earlier conversation he had had with Rav Moshe Feinstein in which Rav Moshe had said, “It is permitted, and the halachah is so obvious that it doesn’t need to be written.” Rav Belsky’s conclusion was scientifically borne out by scientists at New York City’s Museum of Natural History employing the latest technology of DNA barcoding analysis using DNA sequencing with capillary electrophoresis.

Rav Belsky had a scientific inclination and a curious mind, both of which led him on a constant search for truth.

As always, in the face of opposition, he stood for the truth as he saw it. Absent his courage and knowledge, we wouldn’t be eating fish today.

But in addition to Rav Belsky’s knowledge, what was unique about him was his concern for the most forlorn elements of society. In his combination of towering intellect with a capacious heart, Rav Belsky followed the model of Rav Chaim Brisker, zt”l. Rav Chaim was the greatest mind of his era, who single-handedly revolutionized Torah study with his analytical method. Yet, as my rebbi, Rav Yosef Dov Soloveitchik, described him, Rav Chaim was the paramount ish hachesed: his home was open to those rejected by everyone else, the poor and the sick but also the mother who gave birth out of wedlock, for whom Rav Chaim found a wet-nurse. Rabbi Meir Bar-Ilan asked a number of rabbanim to describe the essence of the job of a rabbi. The Aruch Hashulchan answered that the job of a rav is to pasken she’eilot. Rav Chaim Brisker responded: to do chesed. When Rav Moshe Soloveitchik, Rav Chaim’s son, first entered the rabbinate, his father told him two things: one, to rule that one who is considered ill from a halachic point of view and must eat on Yom Kippur may eat a full shiur; and two, to remember that the job of a rav is to care for widows and orphans. Indeed, on Rav Chaim’s epitaph, the words inscribed are “Rav Hachesed.”

This was Rav Belsky. He, too, fought heroically for the underdog, the lonely, the embattled, those for whom no one else would care. He put his reputation on the line, time and again, to stand up for what he felt was right. Whenever he was aware of an agunah situation, he would take the lead in trying to help. With the wave of Jewish immigration from the Former Soviet Union to the US, Rav Belsky learned Russian on his own in order to be able to communicate with those who had been cut off from their religion for so long. He was the advocate for Russian Jewry, for the homeless and impoverished, and for those he felt were innocent. He always stood his ground in the pursuit of justice.

There is a story told about the Beit Halevi. As a little child, he was deathly ill with diphtheria; the family didn’t think he would survive. Then, suddenly, his fever broke and he was on the way to recovery.

The Beit HaLevi once explained his miraculous recovery. As a child, he had a melamed who favored the students from wealthy families over the poor ones. One day, there was a bit of a ruckus in the classroom, and the rebbi blamed a poor orphan named Dudele. The rebbi hit the young boy as a punishment even though he was completely innocent. The Beit Halevi, who was a student in the class at the time, stood up and said, “I will not learn in the class of a person who is me’aneh yetomim [causes orphans pain].” He left and never came back. From that point on, he learned with his father.

The Beit HaLevi related that when he was deathly ill, he had a dream. The malach hamavet was just about to grab onto him, when Dudele’s father suddenly appeared and stood between the angel of death and the young Beit HaLevi and declared, “This boy stood up for my son.” And the malach hamavet disappeared. At that moment, the Beit HaLevi said, the fever broke.

That was Rav Belsky. He stood up for the most forlorn people in the Jewish community, people who everybody gave up on, and he did it at enormous risk. He wasn’t necessarily always right, but he did it because he loved truth. He was willing to fight for what he felt was right—regardless of popular opinion. Once, standing in the OU office, whose windows overlooked the Statue of Liberty, he wistfully remarked, “I can swim from here to the Statue and back.” He was a powerful swimmer who never hesitated to swim against the current.

Rav Belsky once related that when one of his younger children was born, the doctor asked, “Why do you have so many children?” To which Rav Belsky replied on the spot, “We Jews are an endangered species!”

Rabbi Menachem Genack is CEO, OU Kosher. This essay was adapted from an article entitled “HaGaon HaRav Chaim Yisroel Belsky, zt”l: An Appreciation” that first appeared in the Yated Ne’eman.