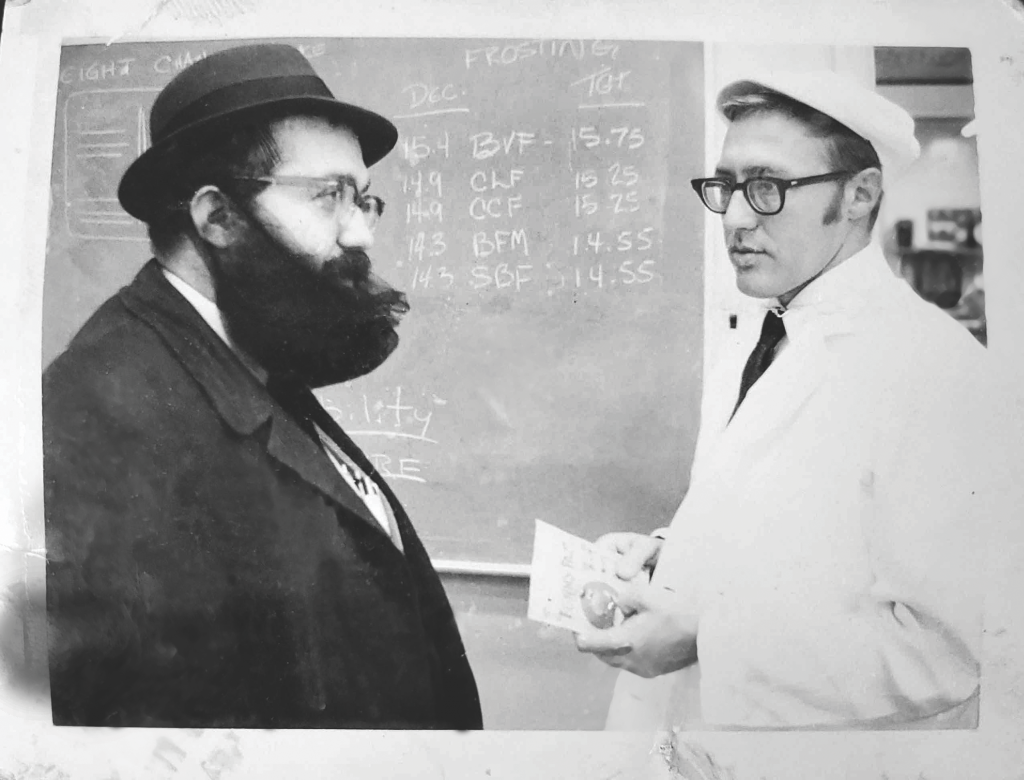 Rabbi Chaim Goldzweig (left) with a plant manager during an inspection in the 1970s. Courtesy of Rabbi Ephraim Nisenbaum

Rabbi Menachem Genack, longtime CEO and rabbinic administrator of OU Kosher, likes to tell the story of the time Rabbi Chaim Goldzweig, a Chicago native who served as an RFR with OU Kosher for five decades, was stuck at a Chicago airport several years ago.

Because of a storm, all planes were grounded. Rabbi Goldzweig struck up a conversation with another Orthodox traveler in the terminal, a stranger. The traveler was between flights and needed some kosher food.

Somehow, with his connections in his hometown, Rabbi Goldzweig arranged for a kosher meal to be delivered to the terminal. He handed it to the stranger.

“I can afford it,” said the stranger. “I’m Moshe Reichmann.”

Rabbi Goldzweig, says Rabbi Genack, apparently did not recognize the name of one of the wealthiest Jewish people in the world, a prominent Orthodox businessman-philanthropist whose family funded innumerable causes in the Jewish community. Rabbi Goldzweig did not accept payment for the kosher meal he had arranged. “That was typical Chaim Goldzweig, his natural style, his humanity. He didn’t know what money was. And whenever he had money, he gave it away,” says Rabbi Genack. He was more aware of the details of international kosher food production than of the identities of world-renowned billionaires.

Rabbi Goldzweig, who passed away at age eighty in 2018 a few years after retiring from his position as senior mashgiach, traveled around the United States and several foreign countries on kosher supervision assignments, while also lending his unique expertise to other kashrut organizations. He was regarded as “the mashgiach’s mashgiach,” bringing his encyclopedic knowledge of kosher ingredients and factory production practices to the cause of kashrut in the days before high-tech information storage and retrieval, Rabbi Genack says. An earlier article in Jewish Action dubbed him “The Super Mashgiach.”

Rabbi Genack describes Rabbi Goldzweig, who served as rav of a small shtiebel in his home (Congregation Tifereth Moshe, named for his late father), as “a kosher Columbo,” an allusion to the iconic 1970s TV detective, whose rumpled raincoat and disarming “aw shucks” style disguised an incisive professionalism. He was a flesh-and-blood kashrut database, a mentor to generations of younger kashrut supervisors. “The [OU] ‘computer’ was Chaim Goldzweig’s brain,” says Rabbi Genack. “The OU’s Kosher Division was built on his shoulders.

I once visited a plant with him,” recalls Rabbi Genack. “We found a box without kosher certification on it or any indication of what it contained. The plant manager hadn’t a clue as to what it was. Rabbi Goldzweig eyed the assorted numbers on the package and nonchalantly said, ‘Don’t worry; it’s a Durkee code (a manufacturer of spices and condiments).”

“A tremendous sense of loyalty to Torah and to halachah,” Rabbi Genack says. “He wanted to make sure it was done right.”

“I dream about ingredients,” Rabbi Goldzweig once said. “I believe it’s a mitzvah to help people eat kosher food.”

Despite his modest title at the OU, Rabbi Goldzweig played a major role in promoting kashrut observance and adherence. “He knew it like nobody else,” says Rabbi Ephraim Nisenbaum, son-in-law of Rabbi Goldzweig and author of The Chief: The World-Changing Life of Rabbi Chaim Goldzweig (New Jersey, 2020). “He put kashrus on the map in many ways.” (“The Chief” was how Rabbi Goldzweig was known to many people in kashrut circles.)

“There’s no question that Rabbi Goldzweig was a pivotal player in the development of kashrut in America,” Rabbi Israel Paretzky, an OU RC told Jewish Action in a 2011 interview. “He was the OU.”

Growing up in an Orthodox family in Chicago and earning his rabbinical ordination from the Telshe Yeshiva, Rabbi Goldzweig was a self-made expert in all aspects of the kosher food industry, starting as an OU Kosher RFR in an era when kashrut standards were lower than they are today. “The public didn’t know about ingredients in those days. As long as the ingredients panel didn’t list lard, everybody [in other words, people who cared about adhering to a kosher diet] thought it was fine,” he would say.

The rabbi would typically receive his week’s assignment on a Sunday morning. By that evening he was on the road or in the air (he reportedly accumulated hundreds of thousands of frequent flyer miles, which he donated to indigent travelers). With few exceptions, he was back with his family in time for Shabbat.

In far-flung international venues, where bearded, black-hatted Orthodox Jews were a rare sight, Rabbi Goldzweig found himself explaining the intricacies of kashrut and the fundamentals of Judaism. When the personnel at one plant failed to understand that a rabbi does not render food kosher by “blessing” it, Rabbi Goldzweig rested his hands on the walls of the building and blessed the company.

He was a flesh-and-blood kashrut database, a mentor to generations of younger kashrut supervisors. “The [OU] ‘computer’ was Chaim Goldzweig’s brain,” says Rabbi Genack. “The OU’s Kosher Division was built on his shoulders.

To his serious kashrut dedication, the rabbi brought an open, optimistic personality. He was noted for the personal relationships he built with non-Jewish plant managers and other personnel, often bringing them a salami—kosher, of course—or chocolates, or a bottle of wine, as an ice-breaking gift. “He won them over,” says Rabbi Nisenbaum. “And they trusted him.”

He also had a wry sense of humor. A woman called him one day in the weeks before Pesach and asked if her husband could take a certain medicine, which contained chametz, during the yom tov. “Well, that depends,” replied Rabbi Goldzweig. “Do you want him to die?” The woman got the message; her husband took the medicine.

Once, while shopping in a Chicago supermarket with his son, he picked up a product to look at the ingredients. A woman who did not recognize him ran over. “Rabbi Goldzweig said you’re not supposed to use that item!” To avoid embarrassing her, he did not identify himself. He put down the item and walked to the next aisle. “At least,” he said, “I know people are listening to me.”

Steve Lipman, who lives in New York, is a frequent contributor to Jewish Action.