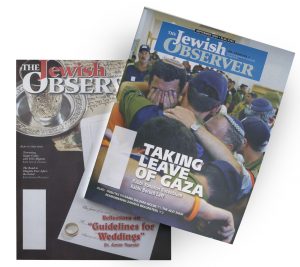 In March 1970, Rabbi Yitzchok Hutner expressed concern about the state of public opinion among America’s Jews. He described the Jewish media as “manufactured” and “often corrosive.” As one of the principal leaders of the yeshivah world, Rabbi Hutner was well aware that newspapers often portrayed the yeshivah world as being out of touch with the rest of the more modern-oriented American Jewish scene. But, admitted Rabbi Hutner, journalism was an unavoidable component of everyday life. The Chaim Berlin rosh yeshivah therefore called for a “proper understanding of public opinion and the public opinion media” informed by “Torah principles.” He urged for an effort that might “undermine the tyranny of public opinion,” at least the kind that paid a disservice to his brand of Orthodox Judaism, the Agudath Israel cause.1

Agudath Israel’s executive head was also bothered by the contemporary discourse that disadvantaged the Orthodox Right. In 1960, Rabbi Moshe Sherer complained to Rabbi Mordechai Gifter of Cleveland’s Telshe Yeshiva that “our greatest tragedy [is] that we have no public organ through which to speak to the masses.” A few years later, Rabbi Sherer had somewhat remedied the situation by establishing the Jewish Observer, an intellectual-minded magazine aimed, in the words of Rabbi Sherer’s biographer, to “provide readers with a thorough grounding in Agudah ideology.”2

This and other initiatives helped, but did not calm concerned leaders like Rabbi Hutner. The public relations problem was solved a few months after Rabbi Hutner’s plea. In October 1970, Rabbi Nisson Wolpin assumed the helm of the Jewish Observer.

Retooling, Not Rebranding
The new editor took over the Agudah periodical without much fanfare. The Seattle-born Torah Vodaath-trained rabbi did not pen a manifesto or editorialize ceremoniously about a new direction for the Agudath Israel organ. Perhaps he did this at the advice of Rabbis Yaakov Kamenetsky and Gedalia Schorr; both had encouraged him to accept the magazine’s mantle. No doubt, it was vital to maintain continuity, publish the words and thoughts of leading Agudah rabbinic luminaries and stay in line with the witty style that successfully marked the first seven years of the journal’s run. So, this general studies principal of Yeshiva Torah Vodaath of Queens (later, Yeshiva Ohr Yisroel) began in understated fashion, translating a section of Rabbi Eliyahu Dessler’s recently published writings.3 No note on Rabbi Wolpin’s appointment. Neither pomp nor circumstance.

Changes were unavoidable; outgoing editor Rabbi Yaakov Jacobs was, as he would have put it, somewhere in between the Orthodox Union and Agudath Israel camps. He later edited the OU’s Jewish Life, the predecessor to Jewish Action. Rabbi Wolpin was an Agudah man—but he was not a newspaperman or veteran journalist like Rabbi Jacobs. Yet, Rabbi Wolpin had more than a modicum of interest in the industry. In the 1960s, he had encouraged his young charges at Torah Vodaath to express themselves in newsprint and learn about current events in an almost Deweyan style.4

More importantly, Rabbi Wolpin understood the language of Jewish journalism. In the postwar period, social scientists had taught rabbis and other communal leaders how to express themselves in sociological terms. Jews of all stripes drew from demographic studies and employed social science categories like “race,” “acculturation,” “otherness” and especially “suburbanization” to impart their wisdom and vision for Jewish life in the United States.5 This kind of sophisticated rhetoric also came in handy in the thick of polemics, to convince the rank-and-file members of the Jewish community who tended to be better swayed with more scholarly than impassioned arguments. Rabbi Wolpin—who concurrently served as director of the Agudah’s Bureau of Public Information—was quick to master the new discourse of Jewish public opinion, a skill he wielded until his death in April 2017.

Writing with Authority
Rabbi Wolpin’s writing was compelling, and it stayed that way until the Agudath Israel announced in 2009 that it would suspend publication of the Jewish Observer due to financial limitations. For four decades, however, Rabbi Wolpin used that position to champion the Agudah’s cause. This included staunch opposition to Conservative and Reform Judaism in the United States and Israel. With considerable compassion, the magazine threw light on mental health matters in the Orthodox community, and how its educational system might be improved to quell noticeable attrition. Rabbi Wolpin’s editorials preached allegiance to the Agudah’s rabbinic establishment, often at the expense of the “Moderns” and “Centrists” who sided with the Orthodox Union, Rabbinical Council of America and Yeshiva University and their champion, Rabbi Joseph B. Soloveitchik, whose obituary was rather muted and made mention of how the Rav was “alone in the path he took.”6 Some, like the Jewish writer and social critic, David Singer, believed that this tactic was an “essential weakness,” and that the journal claimed its identity through “unrelieved negativism.”7 It was a criticism to which Rabbi Wolpin took exception.8 Along with the social science rhetoric, this was something that increased the profile and volume of the Jewish Observer. Both were the stuff of journalism and public opinion that helped fulfill Rabbi Hutner’s vision and made Rabbi Wolpin such a pivotal figure in Orthodox Jewish life. His pioneering efforts can be traced back to some key examples from his first decade on the job.

The 1970s and the New Jewish Observer Agenda
Throughout his first decade of leadership, Rabbi Wolpin authored lengthy essays that advocated for the Agudath Israel mission while trying to stretch the magazine’s readership to other interested parties and decision-makers. Take, for instance, his campaign to reroute philanthropic funding to yeshivot and day schools. Rabbi Wolpin took on the Council of Jewish Federation and Welfare Funds, calling on this organization—and using its own rhetoric—to reconsider how to best close the gap between “public declarations” and “private conduct.” He marshalled much data on educational funding and its ability to stymie intermarriage in a variety of locales. He also reproduced the oft-discussed findings of Professor Eli Ginzberg of Columbia University to argue for the supposedly untapped protentional of the Orthodox Right’s educational system.

In May 1973, Rabbi Wolpin used all this to call attention to the Board of Jewish Education and its Professional Advisory Committee. He noted the leading Conservative and Reform leaders on the panel, as well as Rabbi Joseph B. Soloveitchik and Professor Isadore Twersky’s roles as the Orthodox representatives on the committee. “The composition of this group seems to confine the Federation’s concept of Orthodoxy to that segment of the Torah-study community represented by Yeshiva University,” surmised Rabbi Wolpin. “While YU represents a well-organized, clearly defined segment of this community, it is only one specific segment, divided from many others by distinct ideological differences.”9

In other words, Rabbi Wolpin desired increased funding for his brand of Orthodox Judaism to help contend with the intermarriage dilemma in the United States. Rabbi Wolpin returned to this crusade time and again in his magazine, sometimes sprinkling more Torah sources and at other times quoting the research of surgeon generals and senators to lobby for Orthodox schools and camps.10

Rabbi Wolpin held a deep respect for this sort of research. He once averred that “without raw statistical data, it is quite impossible to pretend to translate this force [of assimilation] into a projection of the make-up of American Jewry.” In March 1976, he weighed in again on intermarriage, reproducing charts from an American Jewish Committee survey, reporting on the learned responses of leading personalities like Rabbis Seymour Siegel and Norman Lamm, drawing upon the insights of sociologist Erich Rosenthal. He wrapped it all together with the regionalized research of the Baltimore and Cleveland Jewish communities and demonstrated that the best “battle-cry against the inroads of assimilation” could be learned from a parable once told by Rabbi Elchonon Wasserman.11 What is more, from time to time his broad reading and authoritative voice gave Rabbi Wolpin confidence to rebuff the claims of “the statistician and his computer forecast[ing] doomsday.”12

Respect for social science did not compel him to agree all of the time. In November 1974, Rabbi Wolpin lashed out against the emerging women’s liberation movement and the “Jewish woman [who] flees her home-centered orbit of activities to join her non-Jewish sisters in seeking liberation from tradition.” Yet, even here Rabbi Wolpin was keenly aware of the language of discourse. He used it to his advantage, appealing to examples that would resonate with
his readership:

The quest for equality to the point of sameness has even brought the dictionary to the chopping block. Directives have been issued to copy editors in the McGraw-Hill Publishing House to purge their lexicon of sexist expressions. Hence, fires are doused by “firepeople,” not firemen,”— a chairperson wields the gavel, not a chairman or a chairlady. Further, book illustrations are to show television sets being repaired by women, while men cuddle the baby on the sidelines. “Equal” must mean “indistinguishable.”13

Rabbi Wolpin also had a knack for thickening the description of the topic under investigation. Neither he nor his journal was interested in breaking news stories. Yet, Rabbi Wolpin made sure to keep up with scores of Jewish newspapers and periodicals. He was fond of reproducing segments of articles and offering his commentary below it.14 Rabbi Wolpin collected newspaper clippings and almost like an anthropologist poured them into his writing so that the magazine’s readers had a very good grasp of the scene from all angles. This is exactly how Rabbi Wolpin addressed the Conservative Movement’s decision to count women for a minyan, Reform Judaism’s initial encounters with patrilineal descent, and numerous features on religion and state in Israel.15 On a very high scholarly level, he wrote ethnographically about America’s emerging kollel movement—the learning, the families, the communities—after he interviewed many prominent heads of these Lakewood-generated institutions around the United States.16

By the mid-1970s, Rabbi Wolpin’s magazine had already done much for the Agudath Israel cause. David Singer recognized the journal as the most prominent mouthpiece of the Orthodox Right. Singer admired Rabbi Wolpin’s tenacity and prose, and a certain quality that “guarantees lively reading.” Writing a few years later, sociologist William Helmreich supposed that the magazine was the best-read journal within the yeshivah world, particularly on Shabbat afternoons.17 The early accolades and journalistic awareness kept Rabbi Wolpin in good stead. For many decades, he remained a leading voice of the Orthodox Right, even as others joined Rabbi Wolpin in the media arena and competed with him for readers. He was the most prominent and pioneering mouthpiece for a community that had once desperately sought out a public voice.

4. See Nisson Wolpin, “Let’s Write a Newspaper,” Jewish Parent 11 (April 1960): 11-13. My thanks to my friend, Menachem Butler, for sharing this article with me and for the insightful conversations we share on Rabbi Wolpin and so many other fascinating matters.