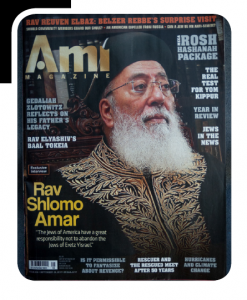 When Rechy Frankfurter and her husband Yitzchok launched Ami Magazine in 2010, they weren’t the only game in town. A variety of competing frum newsprint and glossy publications were already lining the supermarket racks. Undeterred, they went on to claim Ami’s prominent place among them.

As the former editor of two major Chareidi publications, Rechy set out to create a “more inclusive” magazine (hence, the name “Ami,” “my nation”), one that would appeal to the full spectrum of Orthodox Jews. True to that vision, Ami has featured interviews with notables from across the Chassidic, Yeshivish and Modern Orthodox sectors of the community, as well as with movers and shakers in the secular world. The magazine secured exclusive interviews with President Donald Trump, Vice President Mike Pence, Senator Ted Cruz (R-TX), Senator Marco Rubio (R-FL), former Speaker of the House Newt Gingrich, former Texas Congressman Ron Paul and former New York Governor George Pataki, among others. In addition, Ami’s senior White House correspondent, Jake Turx, is the sole overtly Orthodox Jewish member of the White House press corps, says Frankfurter.

Frankfurter sees the magazine as a powerful platform to address pressing concerns in the frum community, such as the rising cost of Orthodox life. Thus, Ami introduced BizTank, a platform where entrepreneurs and business people can pitch their ideas, as well as their existing business expansion plans, patents and concepts, in the hopes of generating investment offers. Ami also features a column spotlighting successful businessmen who share their secrets for success. “There are many creative people in our community with brilliant ideas,” says Frankfurter, “but they lack both the finances and the business know-how to bring that to fruition. Or they have a business that desperately needs cash to grow. This is where BizTank steps in.”

Despite the overflow of frum weeklies available, Ami seems to have a solid readership. Frankfurter welcomes the competition.

“When I was growing up, we didn’t have these publications,” she says. “You could read a secular women’s magazine, but you’d feel like an outsider looking in.”

An insatiable reader even as a kid, Frankfurter never actually considered a career in publishing. In fact, her resume doesn’t resemble those of most successful magazine launchers. She grew up in a Satmar home, attended a Chassidic girls’ high school, and never went to college. Frankfurter does, however, recall frequent, parent-approved expeditions to the public library. Her mother, who enjoyed reading books, encouraged her children to do the same.

After marrying and starting a family, Frankfurter treasured her stay-at-home-mom years. It wasn’t until her children were grown that she began working with her husband in real estate. Then her life took an unanticipated turn.

A close friend, then managing editor of Hamodia, knew of her knack for recognizing quality writing and asked if she would be interested in editing Hamodia’s magazine supplement. With her husband’s encouragement, she entered the frum publishing world and never left. That professional leap offered her valuable opportunities to turn her love of the written word into a fine-tuned craft.

“It’s extremely stimulating to work with her,” says Yitta Halberstam Mandelbaum, Ami’s feature editor. “She is astute and on target. She has unerring instincts in terms of what the public wants to read.”

Unlike the majority of editors of leading secular print publications, Frankfurter isn’t fazed by the proliferation of digital media.

Frankfurter feels gratified by Ami’s rising popularity, but admits there are significant challenges that come with being a magazine editor. “There is a misconception that if your kids aren’t at home anymore, you are free. At my point in life, I juggle [taking care of] parents who are elderly and having to be there for my adult children. There’s this constant struggle to be there for everyone. You try your best to balance it and hope you’re succeeding in doing a good job without sacrificing the family. That’s the biggest challenge for any working woman.”

To ensure all of the material is 100 percent kosher in each issue, including the articles in Aim, Ami’s children’s magazine, Frankfurter enlisted Rabbi Moshe Taub as rabbinic editor and Rabbi Shay Tahan as halachic advisor.

“I feel a tremendous sense of responsibility,” she says. “You will never see an article in Aim, our magazine for tweens, about a girl complaining about her mother, for example. We want to promote derech eretz with messages of how to overcome difficulties, and of empowerment—empowerment is important to us. The underlying message should be the right one, even in a fictional story.”

Unlike the majority of editors of leading secular print publications, she isn’t fazed by the proliferation of digital media.

“Our readership will always need something to read on Shabbos,” she says. “I personally enjoy reading [a hard copy] much more. Even in the secular world, I don’t think digital will completely overtake how we read.”

Overall, she feels the high-quality frum print publications convey a critical message. “It’s good for young people to know that within the framework of halachah, you can achieve this. We can maintain our boundaries and still produce high-end, sophisticated publications. We have a first-rate media that can match the [best] media out there, [presented] in a way we can be proud of.”